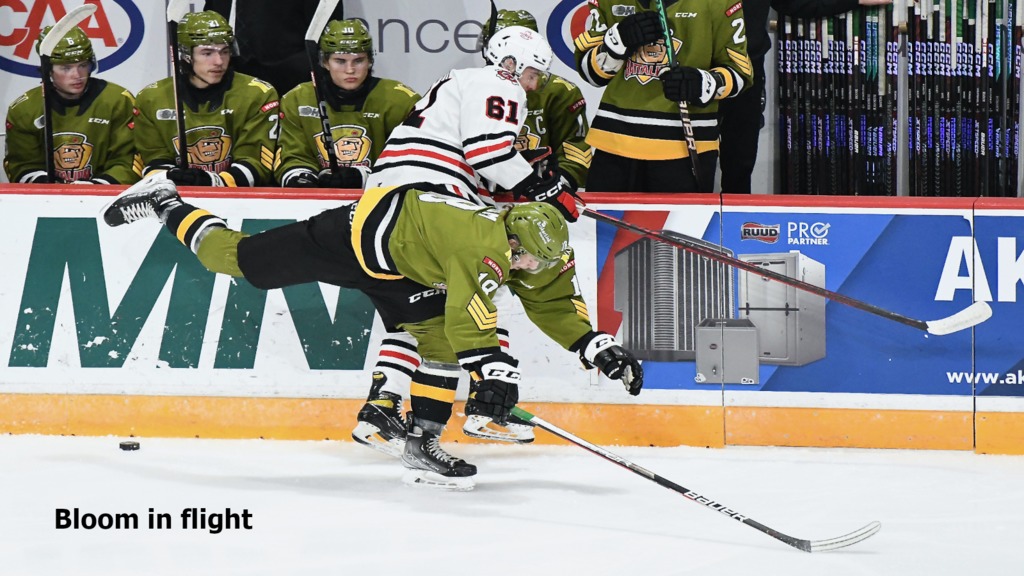 ST. CATHARINES, Ont. — Daniel Michaud scored his third goal of the game at 11:35 of the third period to lift the Niagara IceDogs to a 6-5 victory Saturday night over the North Bay Battalion in an Ontario Hockey League game that featured five goals in the last 20 minutes.

Kevin He contributed two goals and Gerard Keane one goal and one assist for Niagara, which posted a second straight win to move its won-lost-extended record to 6-12-3 for 15 points, fifth and last in the Central Division.

Kyle Jackson scored two goals and Ethan Procyszyn, Liam Arnsby and Alexander Lukin each had one for North Bay, which suffered a second consecutive loss and is 15-8-0 for 30 points atop the division.

Goaltender Charlie Robertson faced 24 shots as the Troops completed a two-game road trip after a 4-1 setback Friday night to the Hamilton Bulldogs.

Michaud’s fifth goal of the season snapped a 5-5 tie after the Battalion battled back from a 4-2 deficit through 40 minutes to take a 5-4 lead on the strength of three goals in a span of 1:50 to start the final frame.

Arnsby collected his fifth goal at 2:44 after Owen Van Steensel fed the puck from behind the net, with Robertson credited with the second assist. Jackson banked his team-leading 14th goal off Nathan Ribau in the crease at 3:45, and defenceman Lukin gave North Bay its only lead when he went to the net and put the puck between Rosenzweig and the left post at 4:34.

Juan Copeland weaved through the slot and sent the puck to Michaud on the right side for a one-timer that tied it at 6:02. Michaud then netted the winner from the slot with a shot that slipped under Robertson.

The Battalion, which built a 15-9 edge in shots in the opening period, bottled up the IceDogs early, but it was the hosts who scored first, when He, going to the net off the right wing, took a cross-crease pass from Pasquale Zito at 12:09. It precipitated a flood of plush toys in the Teddy Bear Toss. The cleanup delayed the game eight minutes.

Penalty killer Michaud broke away, pursued by Ty Nelson, and slipped the puck home at 16:28, assisted by Anthony Agostinelli.

Procyszyn struck at 2:50 of the second period, scoring from the right lip of the crease off a faceoff to Rosenzweig’s left. Nelson and Michael Podolioukh assisted on Procyszyn’s second goal.

With the teams skating four a side, He snapped the puck past Nelson, who appeared to screen Robertson, from the right circle at 5:13. Zito and Keane assisted on He’s eighth goal.

Jackson replied at 9:07, taking a pass from Josh Bloom and firing a team-leading 13th goal from the mid slot. Justin Ertel had the second assist.

Defenceman Keane gave Niagara its 4-2 lead at 11:33, scoring from the mid blue line off a pass from deep on the right wing from Jacob LeBlanc.

The Battalion visits the Sudbury Wolves at 7:05 p.m. Wednesday in the third of five consecutive road dates. The game can be seen live in North Bay on YourTV Channels 12 and 700.

BATTALION BULLETS: The game was the second of six between the clubs, after the Battalion pummeled the IceDogs 9-3 at Memorial Gardens on Nov. 3. The next meeting is scheduled Jan. 8 at North Bay … Nelson, who earned two assists, has a five-game points streak in which he has two goals and eight assists for 10 points … Ertel has a four-game points streak during which he has two goals and as many assists for four points … Bloom, who earned two assists, has one goal and six assists for seven points in six games since a trade from the Saginaw Spirit … Van Steensel fought LeBlanc in the second period, with each receiving a major penalty … Each team went 0-for-4 on the power play … The Battalion was without Dom DiVincentiis, Tnias Mathurin, Avery Winslow, Kyle McDonald and Brett Bouchard … Mike McIvor, called up from the North Bay Trappers U18s, backed up Robertson with DiVincentiis, who was shaken up in practice last Tuesday, in concussion protocol. McIvor made 37 saves on 39 shots at Hamilton … Podolioukh was to turn 18 on Monday … The Battalion overnighted at St. Catharines after the Hamilton game … Niagara’s Rodwin Dionicio served the fifth game of a six-game suspension that followed a major and game misconduct for a check to the head in a 6-2 road loss Nov. 11 to the Kingston Frontenacs. The Swiss import is eligible to return Dec. 2.