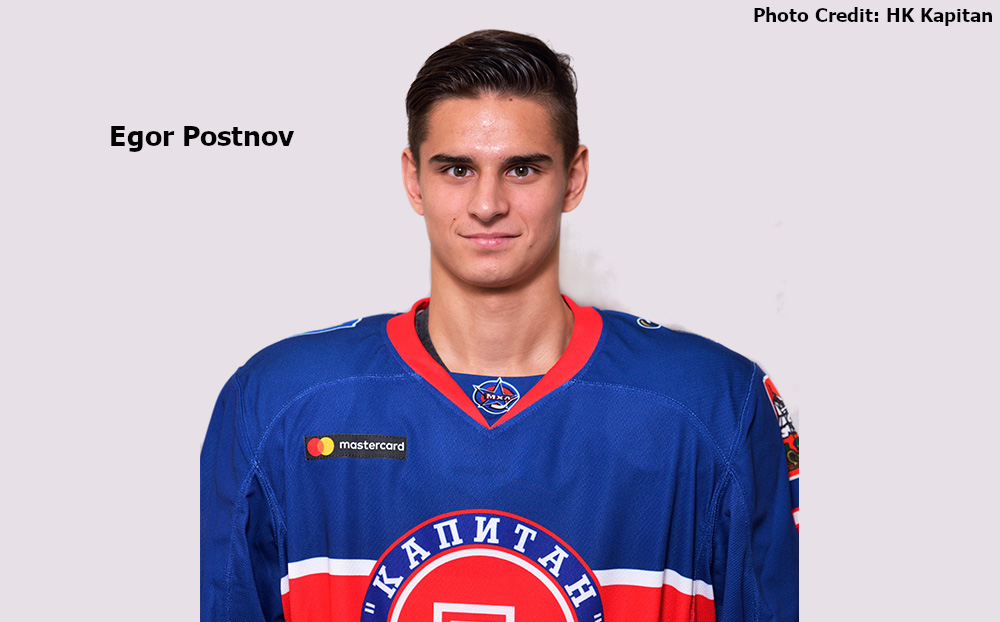 Left winger Postnov was selected with the 22nd overall pick after five teams ahead of the Battalion in the first round passed, their two-man import quotas full.

Postnov scored 17 goals and earned 12 assists for 29 points while accumulating 34 penalty minutes in 63 games with Stupino Capitan of the MHL, or Youth Hockey League, last season. The Moscow resident, who turned 18 on April 19, stands six feet and weighs 156 pounds.

“He’s a guy no different from a few of our players this year who were just off the (National Hockey League) Draft,” said Adam Dennis, one of two assistant general managers and an assistant coach with the Battalion, who registered the club’s picks because Stan Butler, director of hockey operations and head coach, was with the NHL’s Los Angeles Kings.

“He’s a winger who’s very skilled, likes to shoot the puck, and he goes to the net really hard,” Dennis said of Postnov. “He enjoys scoring goals, and I think he’s going to be fun to watch next year.”

The Troops tabbed Maier in the second round, 62nd overall although they held the 87th selection before passes by member clubs of the OHL, Quebec Major Junior Hockey League and Western Hockey League.

Maier, a right-shot rearguard, played last season at various levels with the Sodertalje SK under-18 team in Sweden, totaling six goals, 24 assists, 30 points and 45 penalty minutes in 40 games. Having turned 18 on Jan. 12, he stands five-foot-11 and weighs 156 pounds.

“David was a guy whom I actually came across through some mutual contacts while playing in Austria,” noted Dennis. “I was watching one of his former teammates at the under-20 by the name of Marco Rossi and just fell in love with David.

Maier is a member of the Austrian national junior team. Rossi and Meier are the first Austrians drafted since 2016.

The Battalion had only one import last season in Swedish defenceman Adam Thilander, who will play in his native country in 2018-19. The Troops took Czech centre Filip Chytil with their only 2017 pick, but he had been drafted by the NHL’s New York Rangers and spent the season with them and their American Hockey League affiliate, the Hartford Wolf Pack, never being assigned to North Bay.

“I’ve been in touch with their agents,” Dennis said of Postnov and Maier. “Both guys, from what we’ve been told, are thrilled to come.”

Butler spoke via telephone from El Segundo, Calif., where he was to make a presentation at a coaches’ seminar in conjunction with the Kings’ development camp.

“He’s a highly skilled player who we think has some good upside, and we think with his skill he can come in and be a good member of our team,” Butler said of Postnov, noting: “We’re pretty happy with both players.”

The Saint John Sea Dogs of the QMJHL made Slovakian right winger Maxim Cajkovic, who played in Sweden last season, the No. 1 pick in the process, in which the three leagues select in inverse order of the previous season’s final standing, with non-playoff teams having preference. The order of selection among the leagues changes from year to year.

The 60 CHL clubs made a total of 77 picks, numbering 47 forwards, 23 defencemen and seven goaltenders. The Czech Republic led with 16 selections, followed by Russia with 15.