In the Spotlight: Stevens 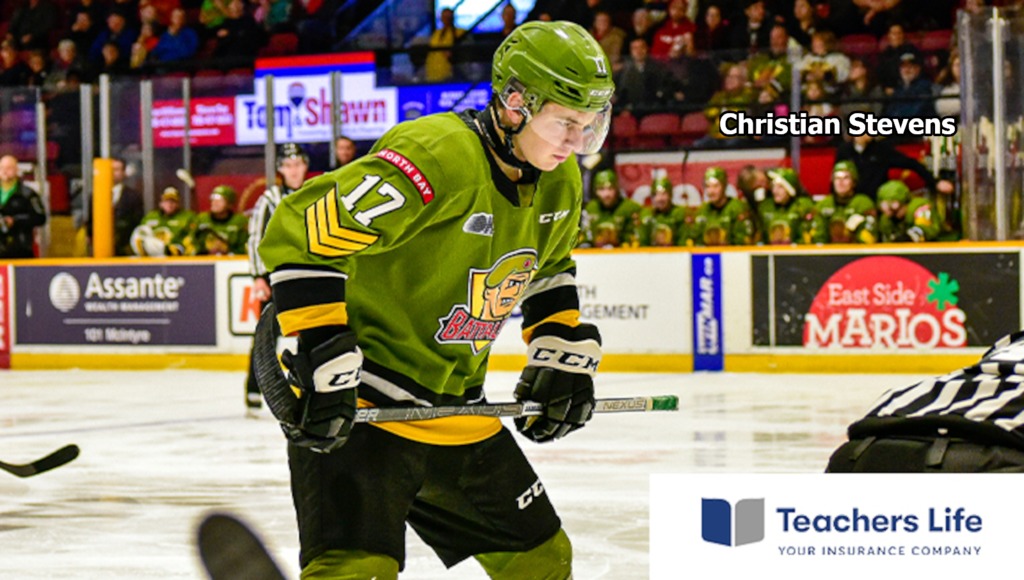 NORTH BAY, Ont. — Christian Stevens’s first season with the North Bay Battalion was a balancing act between his Ontario Hockey League rookie campaign and his final year of high school.

Stevens opened 2019-20 with the junior A Whitby Fury, scoring eight goals and earning 18 assists for 26 points in 32 games. Reporting for duty with the Battalion after being acquired Jan. 10 from the Niagara IceDogs, centre Stevens played 22 games, recording one goal and two assists for three points before the season was cancelled because of the coronavirus pandemic.

He spoke this week via Zoom from his home in Brooklin, a community within Whitby, Ont., as part of the OHL’s Academic Spotlight Program, sponsored by Teachers Life.

“It’s hard to balance hockey and school but, if you have a good relationship with your teachers, they usually give a lot of help by giving you longer due dates or things like that,” said Stevens, 18.

“You just have to put in the work and, if you’re putting in the work and they’re seeing you doing that, they’re going to help you. They want you to succeed in the end so as long as you ask for help, and doing what you’re supposed to do makes the workload a bit easier.”

Stevens, who graduated from North Bay’s Chippewa Secondary School after having taken most of his courses at Brooklin High School, finished his last semester online, which required an adjustment.

“I found it a little difficult, as it’s more self-guided learning and planning. But I missed the in-class experience. I think it’s better for learners like me who like to see and talk to the teachers, but I made the best out of it.”

Stevens said hockey has helped him in the classroom.

“It’s made me more organized and determined. I always knew that getting good grades would help me in the future, even if it’s playing in university or getting into the business side of hockey. Being a good student translates to on-ice decisions as well.”

He started looking at post-secondary options before joining the Battalion.

“I applied to many different universities prior to coming to North Bay and was successful in getting into the programs I had chosen. I decided to take the time off to find what I would specifically like to do. I plan to take a few online courses in January in sports administration.

“I’d like to stick to the game any way I can. I love the game and I always have, so being in the general manager’s spot would be so cool to me. I love seeing all the trades. That’s really interesting to me. I might like even being an advisor, like an agent or something.”