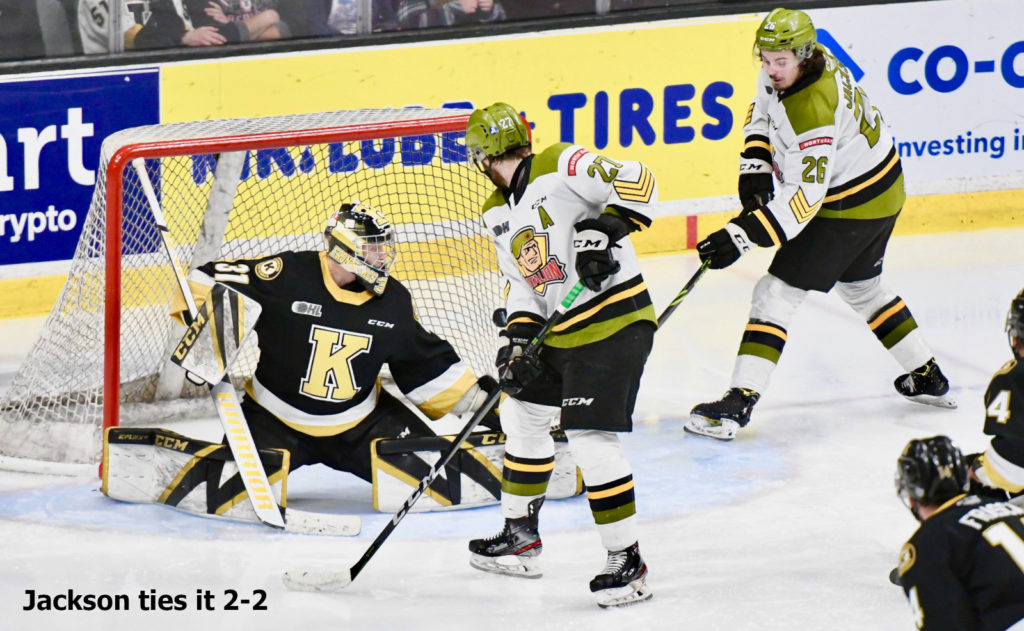 KINGSTON, Ont. — Kyle Jackson tied a franchise record with four goals, pacing the North Bay Battalion to a 6-3 comeback victory Tuesday night over the Kingston Frontenacs and a lead of two games to one in their Ontario Hockey League second-round playoff series.

Owen Outwater scored the winning goal and Mitchell Russell, who had three assists, added an empty-netter for the Battalion after the teams split the first two games of the best-of-seven Eastern Conference semifinal at North Bay. Russell, who has nine goals and as many assists for 18 points in seven games, leads OHL playoff scorers.

Paul Ludwinski and Francesco Arcuri each had one goal and one assist and Martin Chromiak the other goal for Kingston, while goaltender Leevi Merilainen gave up five goals on 30 shots before 2,468 at the Leon’s Centre.

The series continues in the Limestone City at 7 p.m. Thursday, with the fifth game scheduled Saturday night at Memorial Gardens.

Outwater, North Bay’s first-round pick in the 2021 OHL Priority Selection, scored his first playoff goal on an unassisted effort at 15:51 of the middle period, breaking a 3-3 tie. He seized the puck near the boards at centre ice and dashed toward the net to beat Merilainen with a snap shot from the left circle.

With Kingston’s Lucas Edmonds off for tripping, Jackson struck with the man advantage at 4:08 of the third period, converting from the right lip of the crease after Russell backhanded the puck from behind the net. Coe had the other assist on Jackson’s seventh goal of the postseason, which tied Justin Brazeau’s club record for goals in a playoff game.

With Merilainen gone for a sixth attacker, Russell slid the puck into the empty net for his team-leading ninth goal at 19:35. Russell is tied with Logan Morrison of the Hamilton Bulldogs for the league lead in goals.

The Battalion, which trailed 2-1 through 20 minutes, tied it on the power play 24 seconds into the second period when Jackson redirected a shot-pass from the left wing by Matvey Petrov, with Ty Nelson drawing the second assist.

Arcuri gave Kingston a 3-2 lead at 11:36, scooping the puck from a scrum after it bounced back into the goalmouth from the end boards, but Jackson tied it again at 15:07, going to the net off a Coe pass. The resulting goal set up Outwater’s winner 44 seconds later.

Chromiak opened the scoring at 5:10 of the first period when Alexander Lukin, retreating slowly as the teams changed, passed it directly to the Slovakian import driving alone up the slot for his fourth goal.

Ludwinski made it 2-0 at 12:08, going to the left side to convert the rebound of a Shane Wright shot off the right wing after the Battalion turned over the puck in the neutral zone. Arcuri also assisted on Ludwinski’s team-leading seventh goal.

Jackson replied at 18:54, depositing the puck behind Merilainen from the right lip of the crease after Coe fed it from the left corner. Russell had the other assist.

BATTALION BULLETS: The Battalion played on the latest date in franchise history, surpassing May 9, 2014, when the Troops lost 4-3 to the host Guelph Storm in Game 5 of the OHL Championship Series. The pandemic caused the start of the 2021-22 season to be pushed back two weeks, and the schedule then was extended two weeks, ending April 17 rather than in mid March … The previous Battalion playoff game at Kingston was a 6-5 loss in Game 5 of a first-round series March 31, 2018. The longest game in franchise history ended when Gabriel Vilardi scored at 14:05 of the third overtime period. Brazeau set the postseason record with four goals … The Battalion has a won-lost record of 15-20 in the third game of a playoff series, including 6-7 since relocation from Brampton in 2013. The Troops are 3-3 in third games on the road representing North Bay … Liam Arnsby, who was high-sticked to the face by Kingston’s Zayde Wisdom in a 5-4 overtime loss at home Sunday in Game 2, wore a cage … Coe has at least a point in seven playoff games, registering five goals and 12 assists for 17 points … The Battalion, which didn’t incur a penalty, went 2-for-3 on the power play … The Battalion scratched Cam Gauvreau and Nic Sima … Kingston scratches were Gage Heyes, Mitchell Brooks, Nathan Poole, Quinton Burns and Maddox Callens … Sean Reid and Anthony Tapper were the referees.