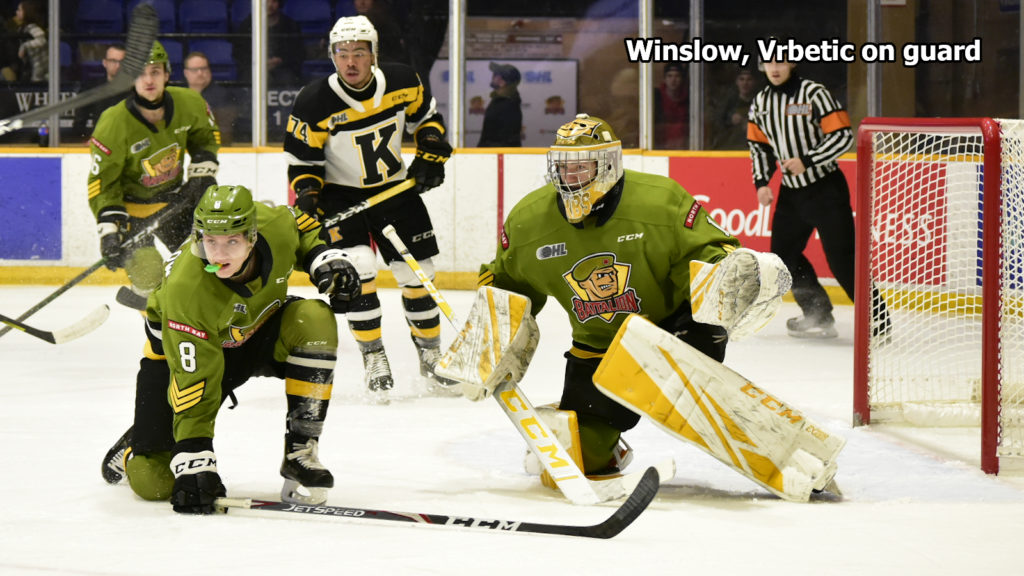 Zayde Wisdom, Nick King and Vitali Pinchuk each contributed one goal and one assist, and Lucas Rowe and Shane Wright also scored for Kingston, which moved its won-lost-extended record to 15-28-4 for 34 points, fifth and last in the East Division. Goaltender Ryan Dugas made 33 saves.

Luke Moncada had one goal and one assist for North Bay, which also got goals from David Campbell and Nick Grima. The Battalion, 11-35-2 for 24 points, fifth and last in the Central Division, saw goaltender Joe Vrbetic face 25 shots before a crowd of 2,140.

“I’m disappointed in the result,” said interim coach Ryan Oulahen. “We’re two teams trying to climb up into the playoff race, and they beat us in every area of the game.”

The outcome essentially was decided in the second half of the middle period, when the Battalion failed to capitalize on a two-man advantage lasting 1:09 and extended power-play time after that. King went off for high-sticking at 11:10, and Jake Murray drew a double minor for the same infraction at 12:01.

Dugas rose to the occasion, sliding to deny Shane Bulitka off the right wing and stopping an Avery Winslow drive from the left side and Mitchell Russell’s attempt at the rebound. The visitors killed the 2:51 left in Murray’s penalties as Dugas got the glove on a Russell drive and blocked a Grima shot from the left-wing circle.

“This was probably the turning point,” noted Oulahen. “We made some unbelievable plays and had some really good chances, and their goalie made a couple of good saves.”

The Frontenacs were barely back to full strength when Pinchuk made it 5-3 at 16:15, sliding a backhander past Vrbetic’s left pad.

Wright put his team-leading 28th goal of the season past Vrbetic’s blocker from the right circle on the power play at 6:02 of the third period to wrap up the scoring. Wright, who has 18 assists, leads OHL rookies in scoring with 46 points in 43 games.

Wright, who was awarded exceptional player status by Hockey Canada to play in the OHL at 15, made his first appearance at Memorial Gardens.

Campbell opened the scoring with his first OHL goal at 6:58 of the first period. Defender Jacob Brahaney’s pass deep in his own zone deflected off the left skate of Alex Christopoulos and slid to Campbell, who cruised across the goalmouth and ripped the puck high over Dugas’s glove.

Wisdom replied on the power play at 12:26. Vrbetic stopped Chromiak’s shot from the deep in the left circle, but the rebound went to Wisdom, who fired it home from the deep slot. Rowe then scored at 17:57, outmuscling Christian Stevens to deposit a wrister past Vrbetic’s blocker.

Moncada made a strong move to the net off the right wing and slid the puck between Dugas’s pads 29 seconds later. Brandon Coe and Winslow assisted on Moncada’s team-leading 27th goal.

Defenceman Grima put the Battalion back in front at 1:10 of the second period when his drive from the slot went off the left post. Coe and Moncada assisted on Grima’s third goal.

Chromiak struck on the power play at 4:19, converting a King feed at the lip of the crease, before King made it 4-3 at 9:12, drilling a screened shot from the top of the left circle. Defenceman King, traded to Kingston on Oct. 26, made his first return to North Bay.

The Battalion faces the Peterborough Petes at 7:05 p.m. Thursday to open a three-game road trip.

BATTALION BULLETS: Ontario Northland Customer Appreciation Day saw staff, families and guests attend the game in company scarves, with the Battalion team bus available for tours. A kiosk provided light-up sticks to young fans … It was the second of four games between the teams, after the Frontenacs won 4-3 at home Nov. 29. The next meeting is Friday night at Kingston … Moncada has a three-game points streak in which he has three goals and two assists for five points … Coe has a three-game assists streak in which he has five assists … The Battalion went 0-for-7 on the power play. Kingston was 3-for-5 … The Battalion again was without Simon Rose, Mason Primeau and Braden Henderson … Rose completed a two-game suspension assessed for a purported check from behind late in a 4-3 loss Thursday night to the visiting Guelph Storm. No penalty was called … Stan Butler, longtime Battalion coach who now is a senior adviser, turned 64 … Wright, a Burlington, Ont., resident who turned 16 on Jan. 5, was taken first overall in the OHL Priority Selection last April from the Don Mills Flyers minor midgets, with whom he was a teammate of the Battalion’s Liam Arnsby and the Christopoulos twins, Alex and Paul … Chromiak, a Slovakian who was the second overall pick in the Canadian Hockey League Import Draft last June, has six points, including two goals, in the last two games. He joined Kingston in January.