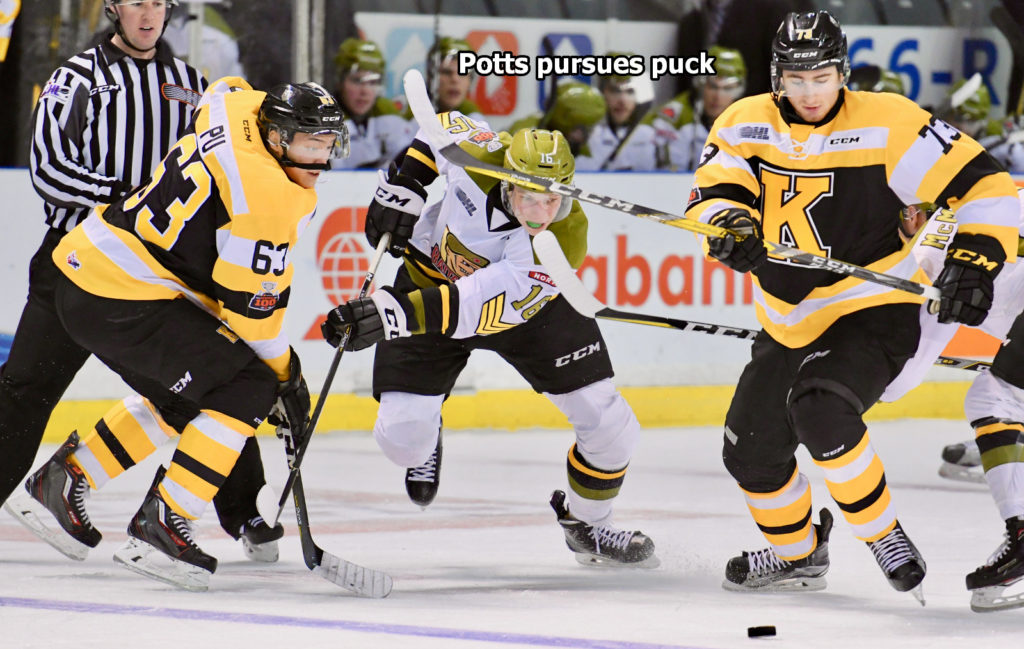 Linus Nyman scored two goals and Brett Neumann the other for third-place Kingston, which got three assists from Cliff Pu. Goaltender Jeremy Helvig made 26 saves before 2,370 at the Rogers K-Rock Centre.

The Battalion is the host team for the third game at 7 p.m. Tuesday at the Sudbury Community Arena, as Memorial Gardens is being reconfigured to a hockey venue after the World Women’s Curling Championship, which ended Sunday. Game 4 is scheduled at North Bay on Thursday night.

The Battalion trailed 3-2 after 40 minutes, but Chenier tied it on the power play at 7:07 of the third period, firing a pass from McMaster past Helvig from the right-wing circle. Riley Bruce had the second assist on Chenier’s first OHL playoff goal.

Defenceman Paquette found the winner 100 seconds later, drilling the puck from the top of the right circle past Propp, who was screened by Nyman. Pu made a back pass for the lone assist.

Propp went to the bench for a sixth attacker with 1:45 left, but the closest the Troops came to an equalizer saw Justin Brazeau and Adam Thilander each whack at a loose puck in the slot.

Nyman opened the scoring on the power play at 9:32 of the first period, taking a pass from Pu and wristing the rubber over Propp’s glove from the mid slot. Nyman struck again from almost the same spot for his second goal of the series at 17:52, again off a Pu feed.

Kingston seemed set to take a two-goal lead to the intermission, but Potts replied at 19:59, with two-10ths of a second on the clock. McMaster raced down the left wing and fired a shot that Helvig stopped, but a large rebound went to the trailing Potts, who put it home with the goaltender out of position from the save. Jake Henderson drew the second assist on Potts’s first career postseason goal.

Neumann restored Kingston’s two-goal lead at 9:28 of the second period, nine seconds into a power play after Luke Moncada went off for tripping, slipping the puck under Propp and a sliding Henderson while stationed at the left lip of the crease.

The Battalion again scored in the last minute of a period when Coe charged down the left wing and tucked the puck between Helvig’s pads at 19:08. Jesse Saban had the only assist on rookie Coe’s first OHL playoff goal.

Neither team was able to muster much offence over the first half of the period, but action picked up over the final 10 minutes. Propp, who faced 13 shots, came up with good stops on Eemeli Rasanen, Jason Robertson and Ryan Cranford. The Troops directed 11 shots at Helvig, who was challenged by Bruce, Chenier and Patrick Brown.

The game at Sudbury can be seen live in North Bay on YourTV Channels 12 and 700 and heard on Country 600 CKAT. Tickets can be purchased online at www.greatersudbury.ca/tickets, by phone at (705) 671-3000 and in person at the Sudbury arena’s box office.

BATTALION BULLETS: Battalion season ticket holders have been emailed a code providing them with reduced prices at Sudbury. Adult tickets are $21, while tickets for students, seniors and military veterans are $18.50 and children’s tickets are $15.50. The Battalion Booster Club, which has organized a fan bus that will provide a ticket and transportation to the game, is seeking to fill a second bus. Those interested should contact Nicholas Forsyth at battalionfanclub@gmail.com or (705) 840-6449 … The Battalion overnighted at Peterborough starting Thursday because of the unavailability of sufficient hotel rooms at Kingston. The team was to practise Monday at Pete Palangio Arena for the last time … Captain Bruce played his 43rd postseason game, surpassing Nick Paul for sole possession of 10th place on the franchise’s all-time list … The Battalion went 1-for-2 on the power play. Kingston was 2-for-4 … Opening lines included Matthew Struthers centring left winger Luke Burghardt and right winger Brazeau, Potts pivoting left winger McMaster and right winger Henderson and Moncada centring left winger Chenier and right winger Coe. Brown centred Andy Baker on left wing and Rhys Forhan on right wing … The Battalion again was without Simon Rose, Daniel Walker and Kurtis Evans … Kingston scratches were Emmett Gordon, Conor Ali, Paul Larabie and Max Jones.