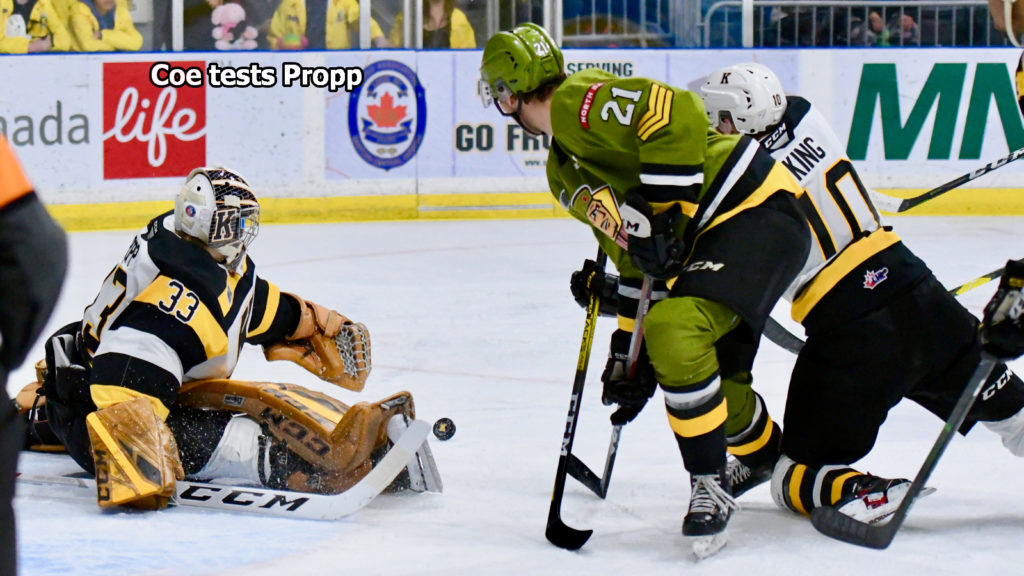 KINGSTON, Ont. — Some losses leave a worse taste than others. For the North Bay Battalion, this one was especially bitter.

“For me, that’s our worst loss of the season,” said a glum coach Stan Butler after the Kingston Frontenacs stormed back to a 4-3 Ontario Hockey League victory Friday night over the Battalion, which led 3-0 after 20 minutes.

Shane Wright, the underager who doesn’t turn 16 until January, got loose behind the defence and hoisted a backhander for the winning goal at 19:05 of the third period, in which the Frontenacs overcame a 3-1 deficit with three goals in a span of 9:37.

Zayde Wisdom provided one goal and one assist and Justin Pringle and Jordan Frasca added a goal apiece for Kingston, which has a won-lost-extended record of 6-15-4 for 16 points, fifth in the East Division. Goaltender Christian Propp, a former member of the Battalion, faced 25 shots before 2,765 at the Leon’s Centre.

Mitchell Russell, Luke Moncada and Brad Chenier each had a goal and an assist for North Bay, 5-21-0 for 10 points, fifth in the Central Division. Goaltender Joe Vrbetic made 35 saves as the Troops, playing the middle game of a three-game road trip that opened with a 6-1 loss Thursday night to the Peterborough Petes, went to 1-14-0 away from home.

Wisdom pulled Kingston within 3-2 with his team-leading 14th goal of the season at 9:28 of the final period, taking a pass from Nick Wong on the right-wing boards and advancing to beat Vrbetic from between the circles. Frasca tied it at 12:09, cashing the rebound of a left-point drive by Jake Murray.

Pringle got the home side on the board at 6:57 of the second period, staging a two-on-one rush with Kallaway Mercer after a long pass from Braden Hache, who earned his first OHL point. Pringle snapped the puck low to Vrbetic’s stick side, and the game was delayed six minutes for the cleanup of plush toys thrown from the stands on the occasion of the Frontenacs’ Teddy Bear Toss.

Russell struck first, at 12:19 of the opening period, for his seventh goal. Kyle Jackson intercepted a clearing attempt at the Kingston blue line and, after a touch by Moncada, Jackson cruised to the right, high in the zone, and snapped the puck past Propp.

Brandon Coe went off for roughing 17 seconds later, and Moncada capitalized for his league-leading fifth shorthanded goal and 12th overall. Chenier stole the puck in the North Bay zone and fed Moncada, the two of them racing away alone before Moncada beat Propp at 12:57.

Chenier got to the goalmouth and tipped home a Russell shot from the right circle on the power play at 17:03. Matthew Struthers had the other assist on Chenier’s 12th goal, which tied Moncada for the team lead.

The Frontenacs acquired Propp in a Nov. 12 trade with the Sault Ste. Marie Greyhounds. Overager Propp has appeared in five games with Kingston, posting a record of 3-1-1 with a 3.43 goals-against average and an .894 save percentage. The Troops sent him to the Greyhounds on June 12 for what became a third-round pick in 2023 once he played this season.

Wright, who was granted exceptional player status by Hockey Canada to permit him to play in the OHL a year early, has 11 goals and nine assists for 20 points in 21 games. A resident of Burlington, Ont., he played last season for the Don Mills Flyers minor midgets with Battalion rookies Liam Arnsby, Paul Christopoulos and Alex Christopoulos before being taken first overall in the OHL Priority Selection in April.

The Battalion completes its road trip at 2 p.m. Sunday against the Ottawa 67’s. The game can be seen live in North Bay on YourTV Channels 12 and 700 and heard on Country 600 CKAT.

BATTALION BULLETS: It was the first of four season meetings between the teams, with the next scheduled Feb. 2 at North Bay … The Battalion went 2-10-0 in November … In 230 games, captain Chenier has 66 goals and 71 assists for 137 points, one more than Ryan Oulahen and 22nd on the franchise’s all-time list … Moncada has seven career shorthanded goals, tied with Kamil Kreps, Cody Hodgson and Mathew Santos for fifth place in Battalion history … Propp opposed the Troops twice with Sault Ste. Marie, winning one game and losing one … Overager Nick King faced his former Battalion teammates for the first time since an Oct. 26 trade for a 12th-round pick in the 2021 OHL Priority Selection … Arnsby and Evan Brand scrapped at 8:08 of the third period, going to the ice together … North Bay went 1-for-4 on the power play. Kingston was 0-for-1 … Battalion assistant coach Adam Dennis missed a second straight game while on a scouting assignment … North Bay was without Mason Primeau and Paul Christopoulos, who completed a two-game suspension handed down for a slew-footing match penalty in a 4-3 win last Sunday over the visiting Niagara IceDogs … Dustin Hutton, who with Wisdom assisted on Wright’s goal, has a seven-game points streak in which he has one goal and seven assists for eight points … Wright has a six-game points streak during which he has six goals and three assists for nine points.