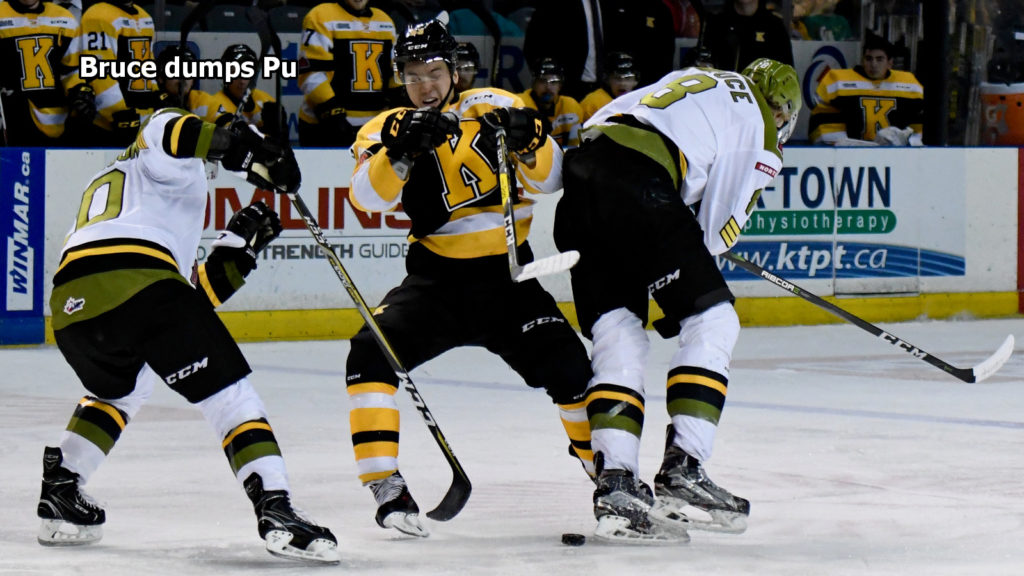 Linus Nyman and Gabriel Vilardi each had one goal and two assists and Justin Pringle also scored for Kingston, while goaltender Jeremy Helvig made 34 saves before 4,253 at the Rogers K-Rock Centre. The win clinched third place in the conference for the Frontenacs, second in the East Division with a won-lost-extended record of 36-22-9 for 81 points.

Jake Henderson, Brandon Coe and Matthew Struthers scored for North Bay, 30-27-10 for 70 points, third in the Central Division and sixth in the conference. Goaltender Julian Sime faced 29 shots for the Troops, who defeated the Peterborough Petes 5-1 Thursday night to open a three-game road trip.

The Battalion, which no longer can catch the Oshawa Generals, will finish either sixth or seventh in the conference after the Mississauga Steelheads defeated the visiting Ottawa 67’s 5-2. Both Mississauga, with two games left to play, and Ottawa, with one, have 67 points. A schedule-ending Battalion win at Ottawa at 2 p.m. Sunday would clinch sixth place over Mississauga, which visits the Niagara IceDogs on Saturday and hosts Kingston on Sunday.

If North Bay loses in regulation time, Mississauga can finish sixth with three more points. If the Troops garner a point, the Steelheads need two wins to take the first tiebreaker, which is total wins.

If the Battalion finishes sixth, it will face Kingston in the first playoff round. Otherwise, the Barrie Colts, second in the conference, will be the opponents.

Pu broke a 3-3 tie with a power-play goal at 9:07 of the third period, spinning deep in the right-wing circle to slide a Vilardi pass between Sime’s pads, with Sean Day drawing the other assist. Vilardi then banged home the rebound of Eemeli Rasanen’s right-point lob at 11:41.

The Battalion, which outshot Kingston 13-12 in the frame, had two good chances when the game still was deadlocked, but Helvig twice denied Henderson as he whacked at loose pucks in the crease.

Pringle opened the scoring at 7:10 of the first period. Ryan Cranford wheeled behind the net and tried to beat Sime at the right post, but the puck slid to Pringle, who directed it between the goaltender’s legs. Pu drove to the net off the left wing at 9:02 and slipped the puck under Sime, falling backwards, for a 2-0 lead.

Henderson, who scored for a third straight game, replied at 15:02, converting a loose puck in the goalmouth. Adam McMaster earned the lone assist on Henderson’s 13th goal of the season and his seventh since joining the Troops in a Jan. 9 trade from the Kitchener Rangers.

A Day turnover in the neutral zone led to the Battalion’s second goal, at 19:16. Brad Chenier sent the puck to Coe, who raced in on the right wing and snapped a wrister high over Helvig’s glove for a 10th goal.

Struthers was credited with giving the Troops a 3-2 lead at 13:40 of the second period as he took a pass from Chenier and rushed to the net where his shot glanced off the skate of defender Matt Hotchkiss in the crease. The goal was Struthers’s 23rd and his 14th since a Jan. 3 trade from the Owen Sound Attack.

Nyman tied it at 16:28, beating Sime high to the glove side off a faceoff to the goaltender’s right.

The game at Ottawa can be seen live in North Bay on YourTV Channels 12 and 700 and heard on Country 600 CKAT.

BATTALION BULLETS: The Battalion went 1-2-1 in the teams’ season series. The Troops have an all-time won-lost-tied record of 34-36-2 against Kingston … The Battalion went 0-for-2 on the power play. Kingston was 1-for-5 … Defenceman Jesse Saban played a 95th game with North Bay, matching his total with the Hamilton Bulldogs before a Jan. 9, 2017, trade … Opening lines featured Struthers centring left winger Luke Burghardt and right winger Justin Brazeau, Kyle Potts centring left winger McMaster and right winger Henderson and Luke Moncada pivoting left winger Chenier and right winger Coe. Rhys Forhan centred Andy Baker on left wing and right winger Patrick Brown … The Battalion was without Simon Rose, Daniel Walker and Kurtis Evans … Moncada returned to the lineup after sitting out at Peterborough with strep throat … With head coach Stan Butler scouting the OHL Cup minor midget tournament at Toronto, assistants Adam Dennis and Scott Wray ran the North Bay bench for a second straight game … Among the missing for Kingston were Liam Murray and Max Jones … Day has a seven-game assists streak in which he has 11 assists … In three games against North Bay, Vilardi had three goals and four assists for seven points … Nyman had two goals and four assists for six points in four games against the Troops … Kingston’s Sam Field returned after suffering a knee injury Oct. 21.