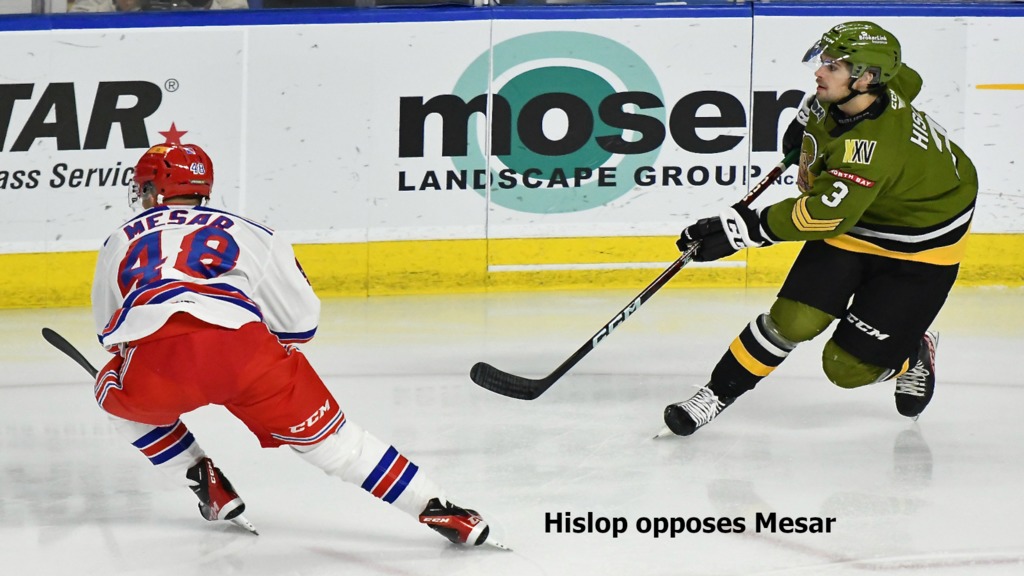 Francesco Pinelli also scored for Kitchener, while goaltender Marcus Vandenberg, making his third appearance and second start of the season, turned in a stellar performance with 39 saves for his first OHL win before a crowd of 6,167.

Kitchener has a won-lost-extended record of 8-9-0 for 16 points, fourth in the Midwest Division. In their previous game, the Rangers won 4-3 at North Bay last Sunday to end a seven-game winning streak by the Battalion, which rebounded with a 6-2 verdict Thursday night over the visiting Kingston Frontenacs.

Dalyn Wakely and Ty Nelson scored for the Battalion, 13-6-0 for 26 points in the Central Division, still two points ahead of the second-place Mississauga Steelheads, who fell 7-3 to the visiting Peterborough Petes. Goaltender Dom DiVincentiis faced 20 shots as the Troops opened a two-game road trip.

Trailing 3-0 in the second period, the Battalion got on the board when Wakely connected at 12:26 off a Reid Valade turnover, finding himself alone in the slot with the puck and rifling it past Vandenberg. It was Wakely’s 10th goal of the season, tying Kyle Jackson for the team lead.

Nelson got North Bay within a goal at 13:55 of the third period, charging up the middle as the trailer on a rush and drilling a pass from Liam Arnsby past Vandenberg. Owen Van Steensel also assisted on defenceman Nelson’s eighth goal.

The Battalion pulled DiVincentiis for a sixth attacker with 1:37 to play and lay siege to the Kitchener zone, with the Rangers icing the puck wide of the empty net several times. Off a right-wing faceoff with 3.6 seconds left, Nelson had a pointblank chance from the left side in the final second, but Vandenberg got his right pad on the effort.

The Troops outshot the hosts 11-1 in the final frame.

Serpa made it 2-0 at 1:46 of the middle period when he poked the puck under DiVincentiis from the right lip of the crease. Serpa then capitalized when the rubber squirted under and behind the seated goaltender, knocking it home for his eighth goal and the eventual winner at 4:50.

Pinelli struck for his team-leading 11th goal at 3:53 of the first period, breaking into the clear to the net and cashing a backhanded deke at the right post.

Josh Bloom threatened Vandenberg in the first minute off a lead pass from Justin Ertel, and DiVincentiis snagged a left-point blast by Roman Schmidt, who had two assists, at 1:22.

Arnsby went off for hooking at 9:15, but Pinelli was denied time on the power play when he drew a misconduct for a mouthguard violation before action resumed.

The Battalion visits the Owen Sound Attack at 7:30 p.m. Saturday. The game can be seen live in North Bay on YourTV Channels 12 and 700.

BATTALION BULLETS: The Battalion visited Kitchener for the first time since Jan. 17, 2020, when the Rangers skated to a 9-2 win. Covid erased the 2020-21 campaign and all but eliminated inter-conference play last season … The Battalion was to bus to Owen Sound immediately after the game … The Troops’ Matvey Petrov saw the end of a 15-game points streak, the OHL’s longest this season, during which he had seven goals and 13 assists for 20 points … The Battalion went 0-for-1 on the power play. Kitchener was 0-for-2 … North Bay was without Tnias Mathurin, Jacob Therrien, Avery Winslow and Kyle McDonald … Kitchener coach Chris Dennis is a first cousin of Battalion general manager Adam Dennis … Among the missing for Kitchener were Mitchell Martin and Marco Costantini … In Costantini’s absence because of illness, Nolan Chartrand was summoned on an emergency basis to back up Vandenberg. Chartrand, a seventh-round pick of the Barrie Colts in the 2020 OHL Priority Selection, was called up from the junior B Kitchener-Waterloo Siskins of the Greater Ontario Junior Hockey League. He played in four games with Barrie last season, including two starts at North Bay in which he suffered losses … Apart from six games with the Rangers, Vandenberg, a ninth-round pick in 2020 from the Elgin-Middlesex Chiefs minor midgets, played last season with the GOJHL’s Stratford Warriors.