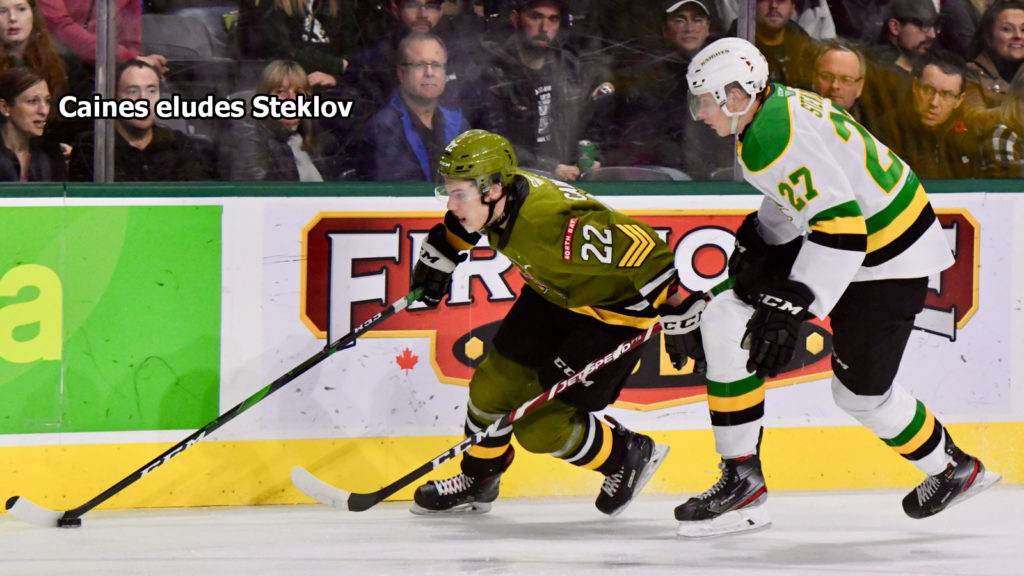 LONDON, Ont. — Connor McMichael’s goal at 18:55 of the third period allowed the London Knights to escape with a 4-3 victory Friday night over the North Bay Battalion, which suffered an eighth straight Ontario Hockey League loss.

McMichael, who assisted on the other three London goals, went deep into the right-wing circle to one-time a diagonal pass from Jonathan Gruden. Ryan Merkley had two goals, and Liam Foudy provided one goal and two assists for London, which moved its won-lost-extended record to 9-4-2 for 20 points, tied with the idle Owen Sound Attack atop the Midwest Division.

Overage goaltender Dylan Myskiw, playing his third OHL game, faced 17 shots, the fewest by the Troops this season, before 9,036 at Budweiser Gardens.

Matthew Struthers, who scored at 17:36 of the third period to tie it 3-3, had two assists, and Mitchell Russell and Brad Chenier contributed a goal apiece for North Bay. Goaltender Joe Vrbetic made 46 saves in a heroic performance for the Battalion, which opened a three-game road trip and is 3-14-0 for six points, fifth in the Central Division.

Struthers cut through the left-wing corner to the goalmouth to backhand the puck into the right side of the net for his team-leading 10th goal of the season, assisted by Braden Henderson and Nick Grima, before McMichael responded with the winner. He leads OHL scorers with 18 goals and 20 assists for 38 points in 15 games.

London trailed 2-1 through 40 minutes, but defenceman Merkley wired the puck high over Vrbetic’s glove 15 seconds into the third period, seven seconds after Struthers went off for slashing.

Foudy took a McMichael pass and cruised across the mid slot to snap home his fifth goal at 10:04, giving the Knights their first lead. Gerard Keane had the other assist, his first of two. Myskiw then denied Cameron Peters with a big stop in the 17th minute.

The teams swapped second-period goals, with Chenier connecting first for the Battalion, on the power play at 7:26. Struthers put a soft shot up the middle from the right point, and Chenier got his stick on it for the redirection and his fifth goal. Mason Primeau earned the second assist.

Merkley replied with the man advantage at 13:17, moving to the top of the right circle and putting the puck behind the kneeling Vrbetic.

The Battalion was outshot 19-6 in the first period, but Russell collected the only goal, at 19:36 off a Struthers rebound. Struthers raced down the right wing to the net, and the puck escaped Myskiw to the left side of the crease, where Russell arrived to slip it home for his sixth goal.

Chenier went off for slashing at 54 seconds, giving London the only full-length power play of the period, but Vrbetic made three saves to deny the Knights before getting the blocker on a screened right-point shot by Merkley in the fourth minute.

Vrbetic snagged a Foudy shot attempt at 13:17 that may have been wide right, and the Troops countered with a Niki Korpialho effort at 15:19 as he followed Luke Moncada up the slot to test Myskiw, who made a glove save.

Myskiw, claimed by the Sarnia Sting on OHL waivers on Oct. 18, was acquired by London on Oct. 29 with a conditional third-round OHL Priority Selection pick in 2024 for goaltender Jordan Kooy. Myskiw played the last three seasons in the Western Hockey League, including last year with the Edmonton Oil Kings, going 28-11-3 with a 2.53 goals-against average and a .914 save percentage.

The Battalion faces the Windsor Spitfires at 7:05 p.m. Saturday. The game can be seen live in North Bay on YourTV Channels 12 and 700 and heard on Country 600 CKAT.

BATTALION BULLETS: The crowd was the biggest to see the Battalion play this season, surpassing the 4,549 for an 8-2 victory Oct. 12 over the Niagara IceDogs at St. Catharines … North Bay went 1-for-4 on the power play. London was 2-for-7 … The previous Battalion low for shots in a game was 23, in a 9-1 road loss to the Saginaw Spirit on Oct. 18 … Opening lines featured Struthers centring Primeau on left wing and right winger Russell, Moncada pivoting left winger Chenier and Korpialho on right wing and Peters centring left winger Kyle Jackson and Harrison Caines on right wing. Josh Currie centred left winger David Campbell and right winger Alex Christopoulos … The Battalion was without Ryan Thompson, Liam Arnsby and Brandon Coe, who completed a two-game suspension for a supposed slew-foot against Liam Ross of the Sudbury Wolves in a 3-2 home-ice loss last Friday night … Arnsby is with Canada White at the World Under-17 Hockey Challenge at the WHL centres of Medicine Hat and Swift Current. Athletic therapist Andrew Sachkiw also is at the tournament … Campbell was called up from the Blind River Beavers of the Northern Ontario Junior Hockey League for the trip. He has played five games with the Battalion this season, earning one assist … McMichael has an eight-game points streak in which he has 10 goals and 14 assists for 24 points.