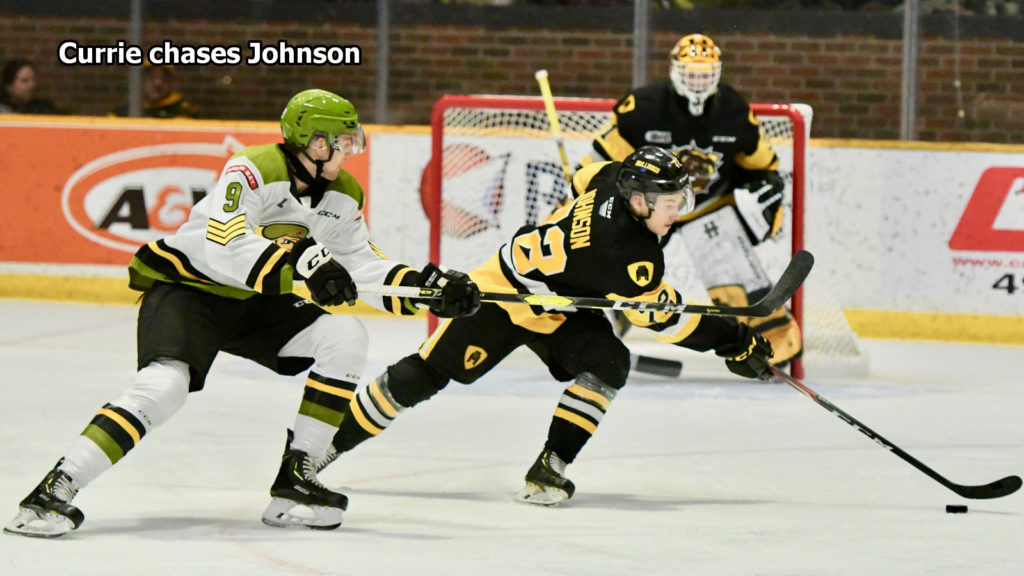 Arthur Kaliyev and Ryan Winterton also scored and goaltender Zachary Roy made 35 saves as Hamilton moved its won-lost-extended record to 9-11-1 for 19 points, fourth in the East Division.

The Battalion has lost 10 straight games twice previously, the first occasion coming in its expansion season, from Jan. 8-29, 1999. The second 10-game streak, also set when the club was based in Brampton, ran from Jan. 27 to Feb. 17, 2002. North Bay’s last win was a 7-5 verdict Oct. 14 over the visiting Sault Ste. Marie Greyhounds.

The Battalion had Liam Arnsby, the club’s first-round pick in the OHL Priority Selection in April, back in uniform after a stint with Canada White at the World Under-17 Challenge.

“When your team is fragile and hasn’t had a lot of success for a while, any little thing that goes wrong always seems to magnify and become a lot worse than it should be,” said coach Stan Butler. “We have to keep addressing the group that, when something doesn’t go our way, maybe a bad bounce or something like that, you have to react in a positive way and you can’t let it get you down.”

Hamilton erupted for three goals in a span of 1:32 late in the first period, sparked by Jenik, who used Kaliyev as a decoy as they broke in alone on Vrbetic. Jenik slid the puck around the goaltender’s right pad at 17:32.

Kaliyev converted on a backdoor play at the right post on the power play at 18:29 for his league-leading 22nd goal of the season, and Jenik connected at 19:04, burying a cross-crease pass from George Diaco while parked at the left post.

The Battalion was outshot 15-10 in the period but tested Roy several times. Chenier and Braden Henderson had good chances in the first half of the frame, and Roy blocked a Josh Currie drive off a rush to the net with James Mayotte pinching in for the rebound. Mitchell Russell hit the left post with the Troops on the power play in the 15th minute.

A delayed penalty was pending against the Battalion when Winterton scored at 15:55 of the second period, firing Jenik’s pass across the goalmouth past Vrbetic’s glove.

North Bay forged a 15-11 edge in shots in the frame. Roy made a good early glove save on Harrison Caines and in the 10th minute stopped a Cameron Peters drive as well as Kyle Jackson’s attempt at the rebound. Roy was down in the crease to deny Caines in the 14th minute and kicked away a Simon Rose blast from the blue line.

Vrbetic, who stopped two hard shots off the right wing by Kaliyev with the visitors on the power play, foiled a Kaliyev backhander in close with the Troops holding the man advantage in the 12th minute. Kaliyev had another good chance in the last minute.

Sustained pressure led to the Troops’ only goal, at 4:26 of the third period. Brandon Coe threaded a pass across the slot to Chenier, who slipped the puck inside the right post for his eighth goal. Luke Moncada had the second assist.

The Battalion continued to press, but Roy was strong on a drive off the right wing by Nick Grima in the seventh minute, with Russell missing on an effort to corral the rebound. Roy foiled Caines from the slot in the ninth minute and denied Chenier from the right-wing circle in the 12th. Peters fired wide on a drive to the net in the 14th minute.

Jenik struck on the power play at 15:12, drilling the puck off the post from the top of the right circle. Jenik has at least one point in all 18 games he has played, scoring 15 goals and earning 23 assists for 38 points.

The Battalion plays host to the Barrie Colts at 3 p.m. Sunday.

BATTALION BULLETS: It was OHL Onside Night, marking a partnership with the Ontario Coalition of Rape Crisis Centres to increase awareness of players’ responsibility to demonstrate respect for women and others. The Amelia Rising Sexual Assault Centre had a display in the main lobby … The attendance was the lowest ever for a Battalion home game at North Bay. The previous low was 1,922 for a 3-2 overtime win Sept. 26 over the Kitchener Rangers … Chenier has a five-game points streak in which he has five goals and two assists for seven points … The Battalion went 0-for-2 on the power play. Hamilton was 2-for-6 … Opening lines featured Matthew Struthers centring Mason Primeau on left wing and right winger Russell, Moncada centring left winger Chenier and right winger Coe and Peters pivoting left winger Jackson and Caines on right wing. Arnsby centred left winger Currie and right winger Alex Christopoulos … The Battalion scratched Ryan Thompson and Niki Korpialho … Arnsby’s team was fourth, the best finish of three Canadian entries, in the eight-team under-17 tournament that ended Saturday night at the Western Hockey League centres of Medicine Hat and Swift Current. Russia downed the United States 6-2 in the gold-medal game … The Troops have returned David Campbell, who played two of three games last weekend, to the Northern Ontario Junior Hockey League’s Blind River Beavers.