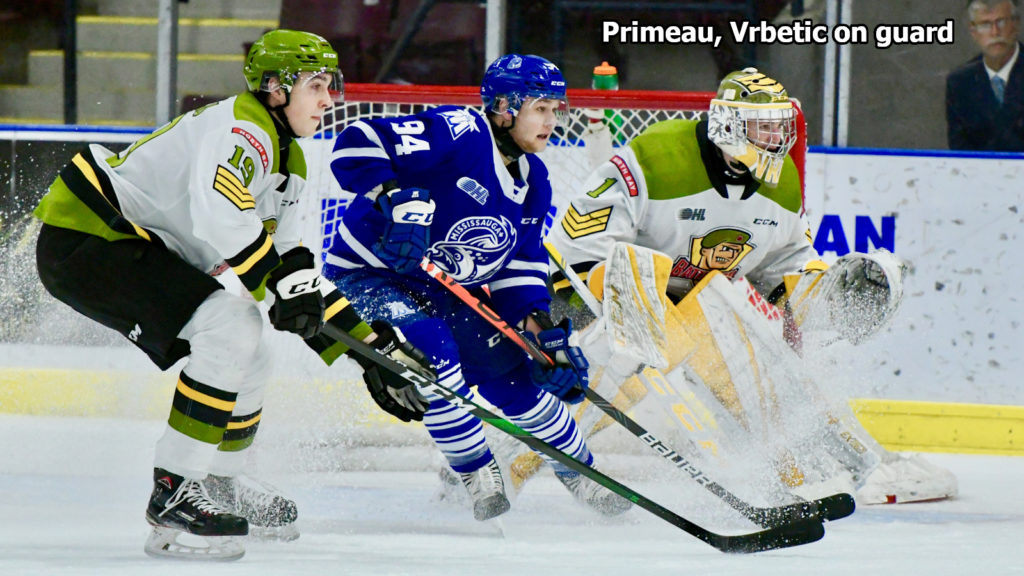 Ty Collins scored two goals, James Hardie had one goal and one assist and Nicholas Canade, Keean Washkurak and Max Dodig provided a goal apiece for Mississauga, which moved its won-lost-extended record to 27-28-5 for 59 points, third in the Central Division, and clinched an Eastern Conference playoff berth.

Goaltender Joe Ranger, seeing action in an 11th game and moving his record to 2-6-1, faced 25 shots. His previous start, from which he was pulled, came Jan. 23 in a 5-3 road loss to the Niagara IceDogs and followed 13 straight complete games by Kai Edmonds, who then made 14 consecutive starts from Jan. 24, with Ranger appearing twice in relief.

Brandon Coe scored two goals and Luke Moncada had one goal and one assist for North Bay, 17-40-4 for 38 points, fifth and last in the division and league. Alex Christopoulos and Christian Stevens, with his first OHL goal, also connected for the Battalion, which remained four points behind the Kingston Frontenacs and Niagara, who are tied for the eighth and final conference playoff spot.

Goaltender Joe Vrbetic made 31 saves before a crowd of 1,890 at the Paramount Fine Foods Centre as the Battalion saw the end of a three-game road winning run. The Troops are 7-25-0 in away games, while Mississauga is 15-15-0 at home.

The Steelheads, leading 5-3 after 40 minutes, got what proved to be the winner when defenceman Penman scored on a two-man advantage at 3:22 of the third period.

Coe, for his 25th goal of the season, backhanded home a backhand pass from Moncada at 8:05 before Washkurak raced away against Nick Grima and scored shorthanded at 12:34. Dodig chopped a rebound into the net at 15:29, and Stevens knocked home a rebound at 18:08 on assists by Josh Currie and David Campbell.

After the teams fought to a 1-1 tie through 20 minutes, Collins connected at 2:36 of the middle period, taking a pass back from a faceoff from Luca DelBelBelluz and wheeling through the right-wing corner before banking the puck off Vrbetic, who left space between himself and the post.

Coe replied at 5:43, combining with Harrison Caines to strip Ole Bjorgvik-Holm of the puck on the left boards and cutting to the net to snap the rubber past Ranger.

Collins collected his 13th goal on a bizarre play that saw the puck fired down the ice from in front of the Mississauga net for a neutral-zone tip that fooled Vrbetic at 6:53, and Penman struck on a three-on-one rush at 14:41.

Christopoulos crashed the net with Liam Arnsby to make it 4-3 just 1:34 later, sparking a melee that resulted in offsetting roughing calls against Arnsby and Richard Whittaker.

Hardie ripped the puck home from the right side on a backdoor play with the man advantage at 19:02. Cole Schwindt and Thomas Harley drew assists on Hardie’s team-leading 34th goal.

Moncada scored his team-high 34th goal at 5:37 of the first period after Shane Bulitka inherited the puck at the Mississauga blue line off a turnover. He fed Moncada, who eluded a defender and went in alone on Ranger, tucking the puck past him on a backhanded deke. Canade responded with his 17th goal at 18:11, dashing into the offensive zone and beating Vrbetic from the left circle.

The Battalion plays host to the Ottawa 67’s at 2 p.m. Sunday on Pepsi Minor Hockey Day.

BATTALION BULLETS: It was the fifth of six meetings, with the Battalion 1-4-0. Mississauga won 4-2 at home Dec. 13, 6-0 at Memorial Gardens on Jan. 9 and 6-2 at home Jan. 31 before the host Troops prevailed 3-2 in overtime Feb. 16. They play next Thursday night at North Bay … In 196 games with the Battalion, Moncada has 51 goals and 50 assists for 101 points. He was acquired with Luke Burghardt on June 27, 2017, from the Guelph Storm, with whom he had five assists in 37 games … Guelph defeated the visiting Oshawa Generals 4-3 via shootout, giving coach George Burnett credit for his 738th OHL win, eclipsing Stan Butler for sole possession of fourth place on the career list. Butler coached Oshawa and the Battalion from its inception in Brampton in 1998-99 until being reassigned in December … North Bay went 0-for-1 on the power play. Mississauga was 2-for-3 … The Battalion scratched Pacey Schlueting, Simon Rose, Avery Winslow and Mitchell Russell, who turned 19 … Grima marks his 21st birthday Saturday … Paul Christopoulos returned from a five-game rest, while Rose left a 1-0 home-ice win Thursday night over Kingston after taking a check … Washkurak has a five-game points streak in which he has five goals and three assists for eight points … In five games against the Troops, Hardie has five goals and four assists for nine points.