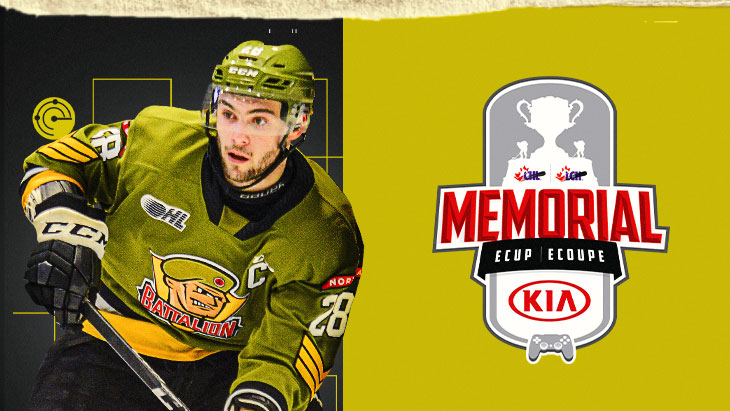 NORTH BAY, Ont. — Luke Moncada is proving to be the comeback king of the Memorial eCup presented by Kia.

Captain Moncada scored shorthanded at 19:28 of the third period to give the Ontario Hockey League’s North Bay Battalion a 2-1 victory over Colin Ratt and the Sherbrooke Phoenix in second-round Sorento Division action Sunday.

Moncada and the Quebec Major Junior Hockey League’s Phoenix battled through two scoreless periods before Sherbrooke struck at 4:28 of the final frame. Josh Currie replied at 15:36, and Moncada, with Ryan Thompson in the penalty box, netted the winner at 19:28.

The visiting Battalion, which was assessed all four minor penalties, killed a two-man disadvantage in the first period.

Moncada advances to a round of 16 meeting with Trevor Longo’s Vancouver Giants of the Western Hockey League, who defeated Allan McShane’s Oshawa Generals 4-2 Sunday. In a first-round game Nov. 30, Moncada rallied from a five-goal first-period deficit to oust Jeremy Michel of the QMJHL’s Val d’Or Foreurs 9-6 in the highest-scoring tournament game to date.

Ratt and Sherbrooke downed Mason Howard’s Niagara IceDogs 3-1 in the opening round.

The single-elimination tournament on the PS4 console featured representatives from all 60 Canadian Hockey League clubs and four guest players, who suffered first-round defeats by a combined score of 26-7.

All tournament games are streamed via Facebook Live and Twitch.

Moncada ousted from eCup
2 months ago