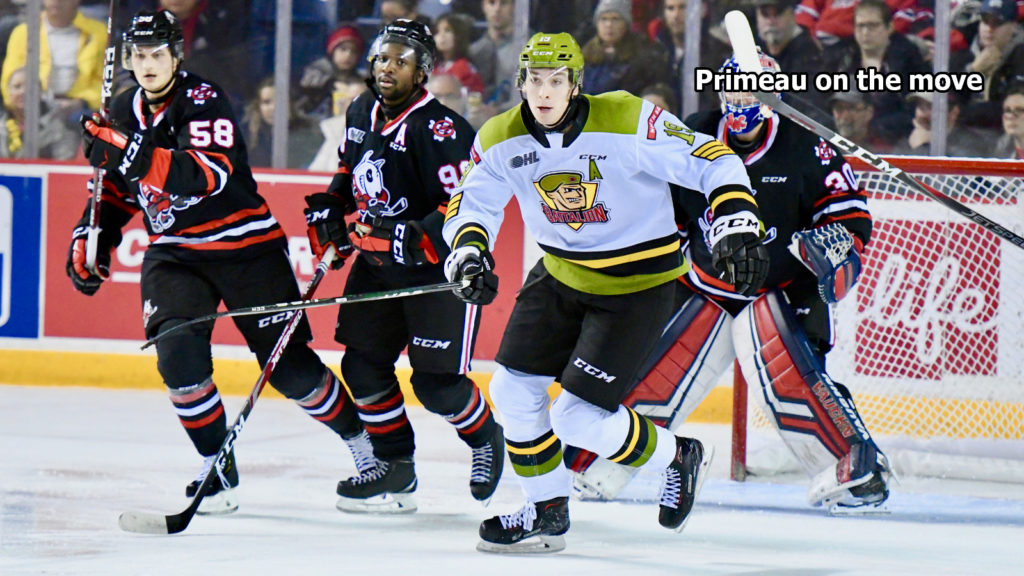 ST. CATHARINES, Ont. — The last time the North Bay Battalion and Niagara IceDogs met, the result was the highest-scoring game in Battalion franchise history. But goals were at a premium when the Ontario Hockey League clubs squared off Saturday night.

Luke Moncada scored the three North Bay goals in the third period, including two into an empty net, as the Battalion snapped a six-game losing streak with a 3-1 victory.

Goaltender Joe Vrbetic stopped 28 shots as the Battalion moved its won-lost-extended record to 10-30-2 for 22 points, fifth and last in the Central Division. The Troops completed a two-game road trip after a 9-2 loss Friday night to the Kitchener Rangers.

Anthony Agostinelli scored for Niagara, 16-20-5 for 37 points, third in the division. Goaltender Andrew MacLean faced 29 shots before a crowd of 5,300 in his third game since a Jan. 8 trade from the Oshawa Generals.

“We play Niagara six times, so we get familiar with their players, and tonight I was fortunate to get a couple of good bounces and get a hat trick,” said Moncada. “We didn’t get the result we wanted in Kitchener and we knew coming in here we had to step our game up, and I think we did that.”

It was a far cry from the IceDogs’ 9-8 overtime victory Jan. 2, ended by Mason Howard’s goal at Memorial Gardens.

After the teams battled to a 0-0 tie through 40 minutes, the Battalion tested MacLean several times early in the final period before Moncada broke the deadlock at 13:40 when his attempted backhand pass to Brandon Coe on the left side hit a sprawling Howard and slid between MacLean’s pads. Shane Bulitka and Braden Henderson had the assists, with Bulitka earning his first point since being acquired Jan. 9 from the Sudbury Wolves.

Niagara pressed for an equalizer, with Jackson Doherty missing the net in front of Vrbetic in the 16th minute and the goaltender making stops against Giancarlo Chanton and Cameron Snow.

MacLean left for a sixth skater with 1:44 to play before a concerted puck battle in the neutral zone ended with Moncada sending what proved to be the winner into the net at 18:57 with assists to Coe and Simon Rose.

Agostinelli answered at 19:17, wiring a wrister past a screened Vrbetic after getting the puck from Snow, who was denied in an effort to split the defence.

MacLean went back to the bench, and Moncada capitalized into the empty net at 19:24. Avery Winslow earned the lone assist on Moncada’s team-leading 24th goal of the season.

Niagara held a 9-6 edge in first-period shots, but there were few good scoring chances. Vrbetic produced saves on Howard and Cameron Peters, a former member of the Battalion, with the IceDogs on a power play late in the period after Mitchell Russell was assessed a kneeing major and a game misconduct. The Troops’ best chance came in the sixth minute when Coe made a strong move to the net off the right wing.

North Bay outshot Niagara 12-8 and enjoyed the best chances in the second period. MacLean twice foiled Alex Christopoulos as he broke in alone. The goaltender snared Christopoulos’s shot in the seventh minute and sprawled to get the right pad on a backhander in the 16th. MacLean, who made back-to-back saves on close-range chances for Mason Primeau, found Rose’s low drive from the blue line through a maze of bodies with the Troops on the power play in the 14th minute.

Vrbetic turned away Cameron Butler as he drove the net in the first minute and stopped Lucas Theriault’s backhander in close in the 15th. Andrew Bruder rolled the puck through the crease on a wraparound attempt at the right post in the fourth minute, and Peters hit the left post in the sixth.

BATTALION BULLETS: The game, the Battalion’s third straight on the road, was the fourth of six between the teams. The Troops won 8-2 at St. Catharines on Oct. 12 and 4-3 at home Nov. 24 before the IceDogs won Jan. 2. The next meeting is March 1 on Niagara ice … In four games against the IceDogs, Moncada has nine goals and one assist for 10 points. He had three goals and one assist Jan. 2 … Three of rookie Vrbetic’s eight wins have come against the IceDogs … Liam Arnsby fought Doherty late in the second period, delivering several punches before slipping and permitting Doherty to get the takedown, which didn’t stop Arnsby from throwing from the ice … The Battalion went 0-for-2 on the power play. Niagara was 0-for-3 … Opening lines included Moncada centring Bulitka on left wing and right winger Coe, Primeau centring left winger Harrison Caines and right winger Chad Denault and Arnsby pivoting left winger Kyle Jackson and right winger Russell. Christian Stevens centred left winger David Campbell and right winger Christopoulos … The Battalion was without Ryan Thompson, Josh Currie and Nick Grima … Among the missing for Niagara was Jake Uberti … Peters, traded to Niagara on Jan. 10, faced his former teammates for the first time. Stevens, who joined the Troops in the deal, never played for the IceDogs … The referees were Quincy Evans and Jesse Wilmot.

Troops, Wolves square off
12 hours ago