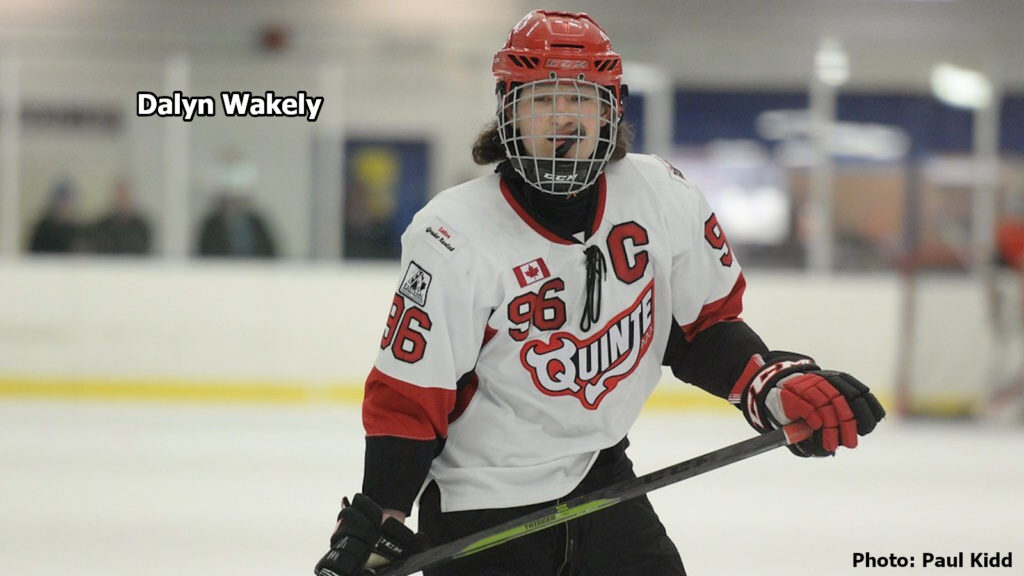 Nelson was introduced via teleconference Friday as the first overall selection. A right shot, the five-foot-eight, 174-pound Toronto resident scored 18 goals and added 47 assists for 65 points in 61 games. He turned 16 on Monday.

Nelson was one of three Jr. Canadiens taken in the first round. Centre Pano Fimis went second to the Niagara IceDogs, marking the third consecutive year in which teammates were named with the first two picks. The Troops held the first selection after finishing last in the league in the truncated season, which saw the final two weeks of the schedule and the playoffs cancelled.

North Bay selected 10 forwards, comprising five centres, three left wingers and two right wingers, four defencemen and one goaltender in the 15-round process conducted via the Internet, with the Battalion’s headquarters set up at a hotel with only five persons in the command room because of restrictions precipitated by the coronavirus pandemic.

“We knew this draft was a deep one, and with that No. 30 pick we were going in with eyes wide open,” said general manager Adam Dennis. “There’s a long wait between pick No. 1 and pick No. 30, but we felt somebody special was going to be there. Wakely was a player we hoped would be there, and we were happy to get him.

“The consensus was that the two best minor midget teams in Ontario were the Jr. Canadiens and Red Devils, and we feel like we got the best player from both of those teams.”

The Troops used their third-rounder, 41st overall, on defenceman Tnias Mathurin from the Ajax-Pickering Raiders minor midgets. Mathurin, six-foot-two and 190 pounds, had seven goals and 12 assists for 19 points in 35 games. A resident of Ajax, Ont., he turned 16 on Jan. 15.

“Mathurin is a really big, physical defensive defenceman who has some offensive ability too,” noted Dennis. “He skates the game really well. He takes care of his defensive end and is a guy who can step in right away.”

The Battalion had two selections in the fourth round and used the first, 63rd overall, on left winger Owen Van Steensel of the Elgin-Middlesex Chiefs minor midgets. A five-foot-nine 175-pounder from Ilderton, Ont., who turns 16 on Aug. 4, Van Steensel produced 23 goals and 39 assists for 62 points in 33 games.

The club’s second choice in the round, 70th overall, was left-shot centre Michael Podolioukh of the Jr. Canadiens, who had 16 goals and 26 assists for 42 points in 59 games. A six-foot 163-pounder from Toronto, Podolioukh turns 16 on Nov. 28.

Without a fifth-round pick, the Troops took goaltender Domenic DiVincentiis of the Vaughan Kings minor midgets in the sixth round at No. 116. A six-foot, 156-pound resident of Bolton, Ont., DiVincentiis turned 16 on March 4.

The club, which didn’t have a seventh-round choice, returned in the eighth to the Jr. Canadiens, choosing right-shot centre Kyan Haldenby with the 141st overall pick. A five-foot-11, 146-pound Toronto resident who turns 16 on April 13, Haldenby had 17 goals and 38 assists for 55 points in 62 games.

North Bay had two picks in the 10th round. With the first, 181st overall, the club chose left-shot defenceman Gus Hinckley of the Detroit Honeybaked 15s. A six-foot-three, 185-pound resident of Sewickley, Pa., a community 12 miles northwest of Pittsburgh, who turns 16 on June 27, Hinckley had six goals and 18 assists for 24 points in 56 games.

In the 11th round, the Battalion chose left winger Max Seguin of the Toronto Nationals minor midgets at No. 201. A five-foot-10, 171-pound Toronto resident who turns 16 on July 11, Seguin scored 12 goals and added 13 assists for 25 points in 32 games.

The club pegged a hometown product in the 12th round, choosing left winger Brett Richardson of the North Bay Trappers minor midgets with the 221st selection. Richardson, who turned 16 on Feb. 5, had 16 goals and 12 assists for 28 points in 26 games.

The Battalion’s 14th-round choice, 261st overall, was right-shot centre Sett Ursomarzo, a teammate of Seguin with the Nationals. Ursomarzo, five-foot-seven and 160 pounds, turned 16 on Jan. 3. The Alliston, Ont., resident recorded 31 points, including 17 goals, in 35 games.

Right winger Vince Baiocchi of the Toronto Marlboros minor midgets was the club’s final pick, in the 15th round, 281st overall. Baiocchi, five-foot-11 and 188 pounds, contributed eight goals and as many assists for 16 points in 33 games. He turned 16 on Feb. 9.

The OHL Priority Selection saw 300 players chosen, all but 10 born in 2004, with nine born in 2003 and one in 2002. The 20 clubs selected in the inverse order of the overall standings, with what would have been the four non-playoff teams, two in each conference, holding the top four picks in each round.

The players selected, from 87 teams across Ontario and parts of the United States, numbered 176 forwards, 94 defencemen and 30 goaltenders. In addition to 2004 births, also eligible were non-overage players not carded with an Ontario-based midget AAA team from protected OHL territories.