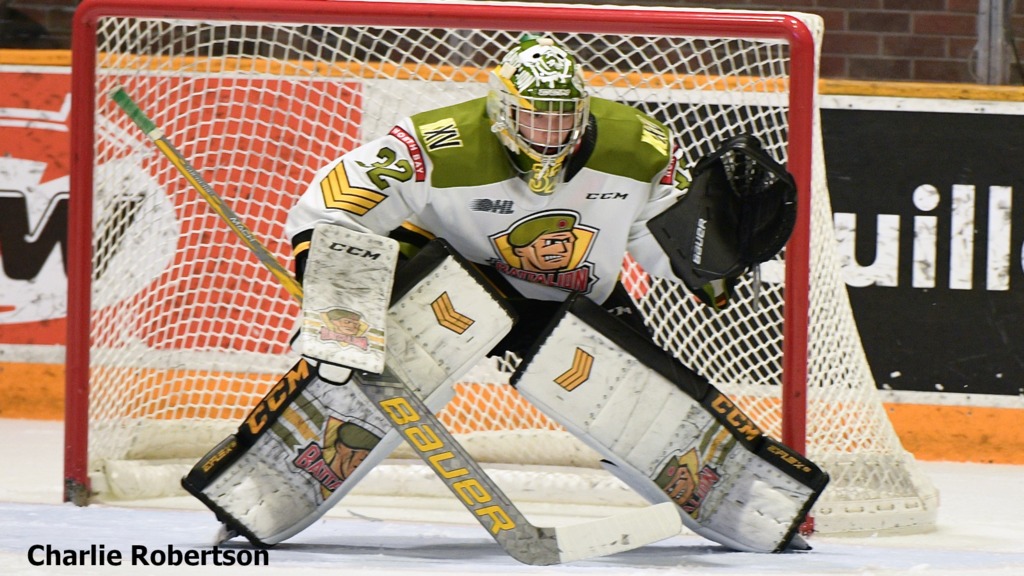 At No. 12, Robertson is the top-rated among four OHLers on a list of 32 North American-based goaltenders in advance of the NHL Draft to be held June 28-29 at Nashville. Romani, a centre and right winger, is 170th of 224 North American-based skaters, and Kennedy is 216th.

“While these lists can often be a distraction, we’re happy that our players have received some recognition for their hard work,” said general manager Adam Dennis. “We look forward to watching them continue to grow and improve as players on a daily basis.”

Robertson, a six-foot-three, 167-pound London native who turns 18 on April 2, was a seventh-round choice in the 2021 OHL Priority Selection from the London Jr. Knights U16s.

He has been named to Team Red for the Kubota CHL-NHL Top Prospects Game at Langley, B.C., on Jan. 25. The game will showcase the top 40 Canadian Hockey League skaters and goaltenders eligible for the NHL draft.

Romani, who turns 18 on July 12, is a Pickering, Ont., resident who was a third-round choice in 2021 from the Toronto Jr. Canadiens. He stands six feet and weighs 178 pounds.

Kennedy was selected nine picks after Romani from the Rockland Nationals U18s. The Ottawa native, who measures six-foot-five and weighs 186 pounds, turns 18 on May 27.

Connor Bedard of the Western Hockey League’s Regina Pats is rated No. 1 among North American skaters, while fellow centre Adam Fantilli of the University of Michigan Wolverines, whose OHL rights are held by the Battalion, is No. 2.

Centre Leo Carlsson of Orebro of the Swedish Hockey League, the top professional league in Sweden, is ranked first among 130 international skaters. There are 12 international goaltenders rated.

Carson Bjarnason of the WHL’s Brandon Wheat Kings is the top-ranked North American goaltender. He will split Team Red crease duties with Robertson at the Top Prospects Game.