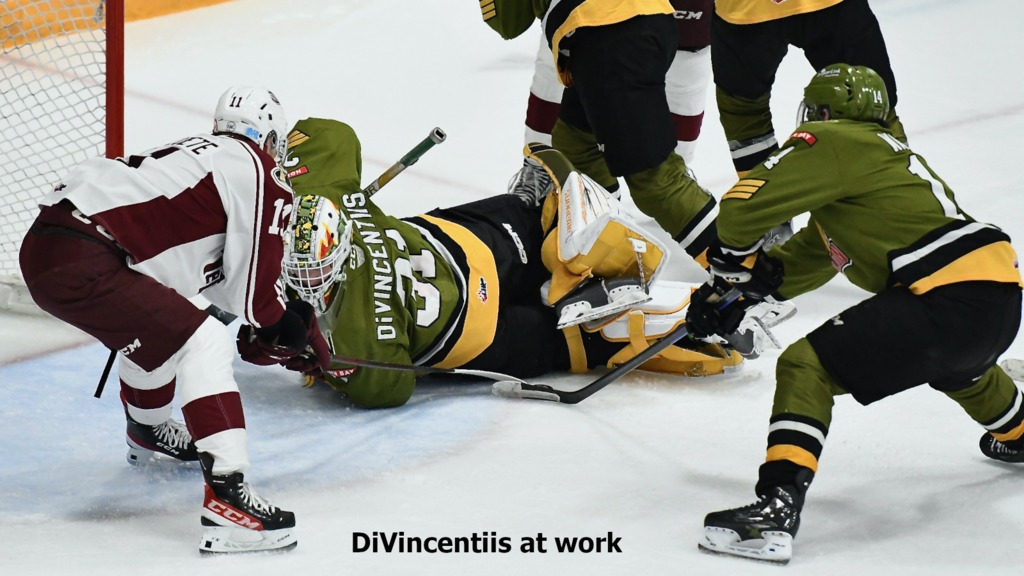 NORTH BAY, Ont. — Dom DiVincentiis of the North Bay Battalion has been named Goaltender of the Week for the period ended Sunday, the Ontario Hockey League announced Monday.

DiVincentiis made 38 saves Saturday night for his first OHL shutout in a 3-0 win over the Peterborough Petes, one night after a 20-save performance in a 4-2 decision over the Kingston Frontenacs as the Battalion swept a two-game road trip.

“Dom was exceptional this weekend and instrumental in the team’s success,” said general manager Adam Dennis. “We’re proud of his accomplishment.”

North Bay has a won-lost-extended record of 18-8-0 for 36 points, nine ahead of the second-place Mississauga Steelheads, who hold a game in hand, in the Central Division. The Battalion is coming off a run of five straight road games in which it went 3-2-0.

DiVincentiis boasts a record of 13-4-0, a league-leading goals-against average of 2.49 and a save percentage of .906, which ranks fourth in the OHL. His 13 wins are one behind the league-leading total of 14 by Max Donoso of the Ottawa 67’s.

The 18-year-old Bolton, Ont., resident was a seventh-round choice of the Winnipeg Jets in the National Hockey League Draft in July. The Battalion took him in the sixth round of the 2020 OHL Priority Selection from the Vaughan Kings minor midgets.

The six-foot-two, 190-pound DiVincentiis was the only OHL-affiliated goaltender to attend Hockey Canada’s under-18 summer development camp in Alberta last year.

The previous Battalion goaltender to receive the honour was Joe Vrbetic, DiVincentiis’s partner last season, who was named for the period ended Nov. 14, 2021.

Two other candidates were considered for the award, in Brett Brochu of the London Knights and Mathias Onuska of the Windsor Spitfires.