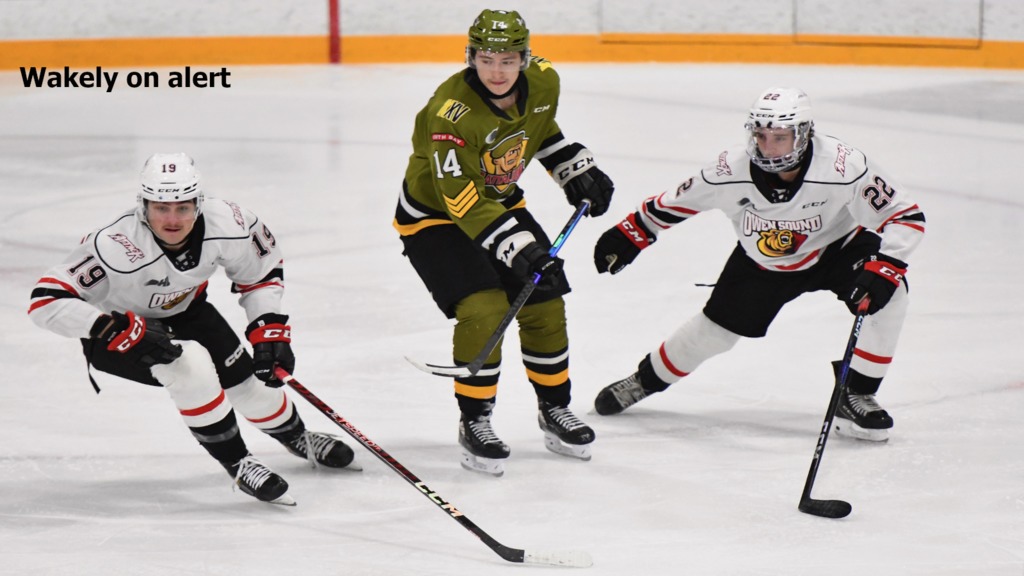 NORTH BAY, Ont. — The North Bay Battalion plays its only home game in the next six when the Ottawa 67’s, sporting the Ontario Hockey League’s best record, provide the opposition at 7 p.m. Thursday.

North Bay has a won-lost-extended mark of 14-6-0 for 28 points atop the Central Division. After two weeks at No. 10, the Battalion has landed at ninth this week in the Canadian Hockey League’s Top-10 rankings, in which Ottawa is third.

Ottawa, 18-2-0 for 36 points in the East Division, saw the end of a second nine-game winning streak in a 6-4 road loss Monday night to the Erie Otters. The game was rescheduled from Saturday night because of a snowstorm that made the New York State Thruway impassable.

The Battalion visits the Hamilton Bulldogs on Friday night and the Niagara IceDogs on Saturday night, making for the fourth of five sets of three games in as many days this season. The last such run is scheduled Feb. 24-26.

“We look back, and we were the team that got to play them in the playoffs and really understood how good that hockey team was,” Battalion coach Ryan Oulahen said Wednesday of the 67’s, whom the Troops swept in four games in a first-round playoff series last spring.

“It’s a very similar lineup, a lot of returning players, so there’s no surprise. They’re structured; they’re detailed. We have a lot of respect for that organization as a whole and aren’t surprised that they’re off to a good start.”

Goaltender Dom DiVincentiis was bumped in practice Tuesday and has experienced concussion-like symptoms which put him into the protocol and will keep him out of action for a week.

Rookie Charlie Robertson, who made 31 saves in a 6-3 road win last Saturday night over the Owen Sound Attack in North Bay’s most recent outing, is to start against Ottawa, with Mike McIvor the backup.

McIvor was called up from the North Bay Trappers under-18 team. A six-foot-one, 154-pound product of Warkworth, Ont., who turned 16 on March 22, he was a fourth-round pick in the OHL Priority Selection last April from the Quinte Red Devils under-16s.

Right winger Kyle McDonald and defencemen Tnias Mathurin and Avery Winslow remain sidelined, while left winger Matvey Petrov, who left the Owen Sound game with what was described as a sore wrist, is questionable.

All that makes the acquisitions of winger Josh Bloom and rearguard Brayden Hislop via a trade last week from the Saginaw Spirit even timelier.

“We love what he brings in terms of our lineup and what he can add,” Oulahen said of Bloom, who has one goal and two assists in three games with the Battalion. “He plays with speed, intensity. He’s an unbelievable leader, a character kid, a really, really smart hockey player.”

Hislop also came in for plaudits after registering one assist in three games.

“We really liked what we saw out of him last weekend. I think he’s just kind of scratching the surface in terms of getting used to the way we play and things that we’re going to do and I think he’s going to be a real valued addition to us back there.”

Dalyn Wakely has been especially productive recently, with 10 goals and six assists for 16 points in the last 10 games, going without a point only once in that stretch. For most of that time, he has centred a line with Petrov and right winger Nikita Tarasevich, but the Peterborough native also has played right wing with centre Liam Arnsby and left winger Owen Van Steensel.

Petrov paces Battalion points production with nine goals and a team-leading 16 assists for 25 points in 19 games, while defenceman Ty Nelson has eight goals and 14 assists for 22 points in 20 games.

Wakely has a team-high 12 goals and nine assists for 21 points, tied with centre Kyle Jackson’s 10 goals and 11 assists, each having played 20 games. Winger Justin Ertel, who switched to right wing from left for the last three games, has seven goals and 12 assists for 19 points in 20 games.

Thursday is Special Olympics Night in partnership with the North Bay Police Service, with two athletes to take part in the ceremonial faceoff.