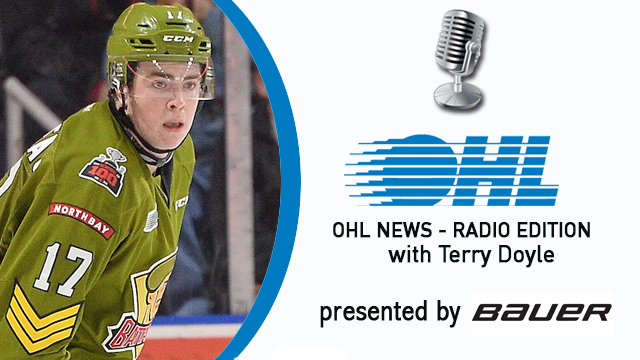 OHL News – Radio Edition with host Terry Doyle and presented by Bauer continues for the 2017-18 regular season bringing fans insight from feature guests as well as news and notes from around the league each and every week over the airwaves.

This week’s segment features North Bay Battalion top scorer Justin Brazeau who enters weekend play with 67 points in 58 games including 36 goals and 31 assists.  The Battalion have been playing well since the new year and hold a record of 27-22-7-2 in a tight battle for playoff home-ice advantage with the Niagara IceDogs who they face Saturday in St. Catharines.

Brazeau is a 20-year-old from New Liskeard, Ont., playing in his third season with the Battalion who chose him in the 13th round of the 2014 OHL Priority Selection.  Despite being overlooked in his first two years of NHL Draft eligibility, the 6’5” 221 lb winger is listed 141st by NHL Central Scouting in their 2018 Midterm Rankings.  Brazeau attended training camp with the Columbus Blue Jackets in the fall.

The power forward chats with Doyle about the Battalion’s strong play of late and how their mindset changed following the league’s trade deadline.  He talks about how his own game has improved, what he has learned from coach Stan Butler, and what it’s like being a Northern Ontario born player competing so close to home.