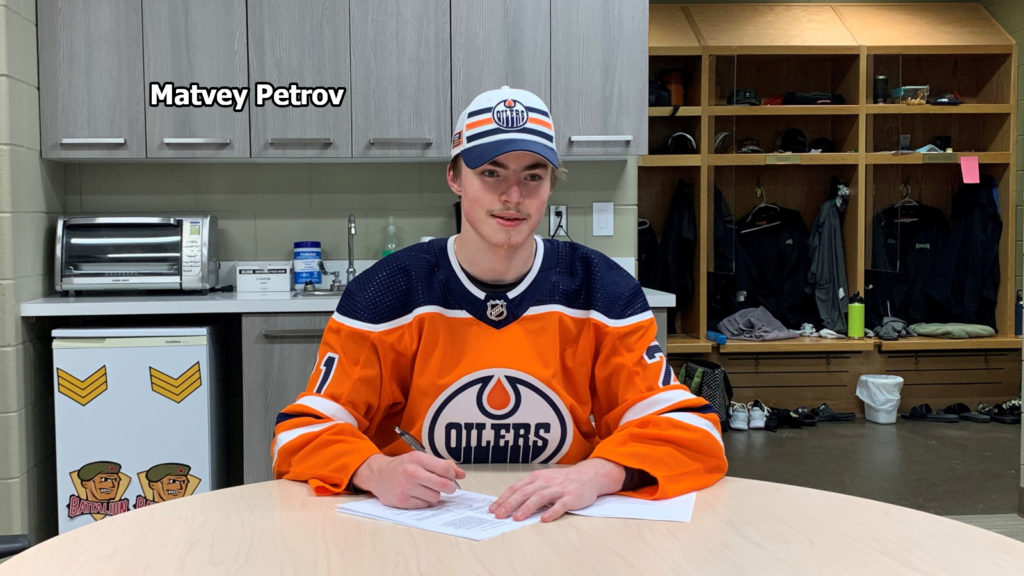 NORTH BAY, Ont. — Left winger Matvey Petrov of the North Bay Battalion has signed a three-year, entry-level contract with the Edmonton Oilers of the National Hockey League, it was announced Wednesday.

Russian import Petrov, who turned 18 on March 12, was selected in the sixth round of the 2021 NHL Draft on July 24 and attended the Oilers’ main camp in September.

“I feel so good,” said Petrov. “I’m so happy to be part of the Edmonton Oilers organization. I’m looking forward to working hard in North Bay, and I’m honoured to be able to sign my first contract with the Oilers.”

A six-foot-two, 181-pound Moscow resident, Petrov was selected by the Battalion with the No. 1 choice in the 2020 Canadian Hockey League Import Draft.

When the Ontario Hockey League campaign was lost to the coronavirus pandemic, he played last season with the top-level junior Moscow Krylya Sovetov, or Soviet Wings, scoring a team-leading 22 goals and earning 20 assists for 42 points in 58 games.

Petrov, a right shot, has scored 10 goals and earned eight assists for 18 points in 14 games with the Troops, including a pair of three-goal games. He is tied for 10th in points and for fifth in goals among OHL leaders.

“Since the day Matvey arrived in North Bay, he’s been nothing but a breath of fresh air,” said general manager Adam Dennis.

“He approaches every day with great enthusiasm and has made an obvious impact in such a short amount of time. We’re thrilled for his accomplishment and look forward to helping him crack the Oilers’ roster in the not-too-distant future.”

In recent games, Petrov has skated on a line with centre Kyle Jackson and right winger Brandon Coe, a trio that has spurred the Battalion to a won-lost-extended record of 8-6-0 for 16 points, first in the Central Division.