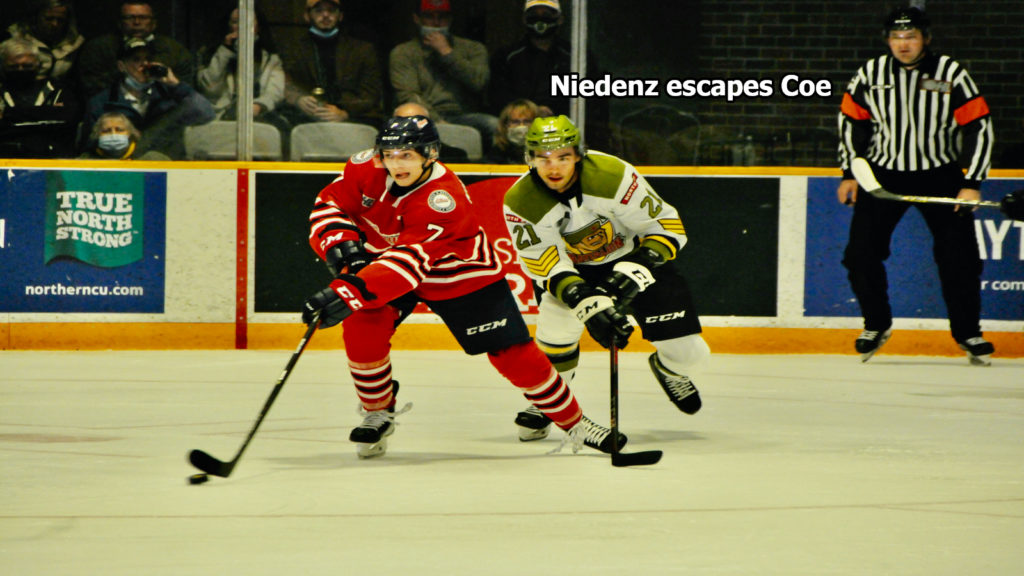 NORTH BAY, Ont. — Rookie Calum Ritchie scored on the power play at 19:17 of the third period to lift the Oshawa Generals to a 3-2 Ontario Hockey League victory Thursday night over the North Bay Battalion, which rallied from a 2-0 deficit in the final frame.

Ritchie also provided an assist, while Ryan Stepien had one goal and two assists and Brett Harrison contributed one goal and one assist.

Goaltender Patrick Leaver made 44 saves in an outstanding performance for Oshawa, which moved its won-lost-extended record to 4-3-2 for 10 points, in a three-way tie for first place in the East Division with the Hamilton Bulldogs and Ottawa 67’s.

Dalyn Wakely and Mitchell Russell scored for North Bay, 5-4-0 for 10 points atop the Central Division. Goaltender Joe Vrbetic faced 22 shots before a Memorial Gardens crowd of 1,955.

“This one stings,” said Battalion coach Ryan Oulahen. “Quite frankly, I thought our guys deserved at least to push it to extras there, but that penalty at the end really was the turning point, and they were able to find the extra goal.”

The Troops had plenty of opportunities but failed to score on six power plays.

“Guys just have to bear down. There’s empty nets, there’s pucks in creases, there’s pucks just off the tips of blades. We need a couple of those to go in and it’s a completely different hockey game.”

The Battalion, which trailed 2-0 entering the third period, saw Wakely cut the deficit to a goal at 6:58 when he charged down the right wing, eluded Blake Smith and ripped the puck past Leaver’s glove. Simon Rose earned the lone assist on Wakely’s second goal of the season.

Russell tied it at 11:33, collecting the puck off the end boards behind the net and stuffing it inside the left post. Paul Christopoulos and Josh Currie assisted on Russell’s team-leading seventh goal.

Rose was off for tripping when Ritchie, the second overall pick in the OHL Priority Selection in June, struck for the winner, sweeping a pass from Harrison past Vrbetic’s left pad from the deep slot. It was Ritchie’s seventh goal, tied with Stepien for the team lead.

The Battalion had two good chances in the final seconds, but Leaver turned aside Russell’s threat off the left wing and denied Brandon Coe from the left circle.

Oshawa grabbed a 1-0 lead in a fast-paced first period with a goal by Stepien at 19:32 as he took a pass from Ritchie off a turnover at the blue line and beat Vrbetic with a forehand deke.

Oshawa had an 8-7 edge in shots in the period, which featured a span of 9:04 without a whistle. Vrbetic faced the tougher chances, most notably early in the frame with the Generals on the power play, making good saves on Ty Tullio, David Jesus and Ryan Gagnier. Vrbetic foiled Harrison from the lip of the crease in the ninth minute, while Leaver parried a drive from Avery Winslow in the sixth minute and Coe just missed the net from the right circle in the 11th.

The visitors didn’t record a second-period shot until the halfway mark but took a 2-0 lead with the man advantage at 11:30. Vrbetic stopped a Tullio shot from the left circle, but the rebound fell to Harrison, who swept the puck into an open net.

The Troops, who outshot Oshawa 23-5 in the period, started testing Leaver early, when he turned away Coe steaming to the net off the left wing. Wakely had two good chances at the left post, and Leaver blocked a Russell backhander from the deep slot in the last minute while Coe crashed the crease for the rebound. Liam Arnsby just missed getting his stick on a rolling shot from Russell while parked on the doorstep in the seventh minute.

The Battalion plays the first of six consecutive road games when it visits the Barrie Colts at 7:30 p.m. Saturday. The game can be seen live in North Bay on YourTV Channels 12 and 700.

BATTALION BULLETS: The Battalion has played its first nine games in only two arenas. Apart from six home dates, the Troops’ three road games have been played at GFL Memorial Gardens against the Sault Ste. Marie Greyhounds, with the visitors going 1-2-0 … Overager Coe saw the end of a career-high eight-game points streak during which he had six goals and seven assists for 13 points … Oshawa went 2-for-3 on the power play … The 46 shots constituted a Battalion high this season, as did the 23 in the middle period. The previous game high was 38 in the season opener, a 7-4 win Oct. 7 over the visiting Peterborough Petes … Russell fired a game-high 10 shots, while teammate Ty Nelson had eight and Coe five … Dom DiVincentiis backed up Vrbetic … North Bay scratched Alexander Lukin and Nic Sima … Oshawa dressed 11 forwards and seven defencemen … Tullio has a nine-game points streak in which he has three goals and 12 assists for 15 points … Leaver, an 18-year-old Perth, Ont., resident in his first season with Oshawa, was an eighth-round pick in the 2019 Priority Selection from the Smiths Falls Bears midgets. He played in 2019-20 with the Westport Rideaus of the Eastern Ontario Junior Hockey League, a second tier of the junior A Central Canada Hockey League, posting a 16-6-1 record with a 2.75 goals-against average and a .920 save percentage … Mike Hamilton and Morgan MacPhee were the referees.