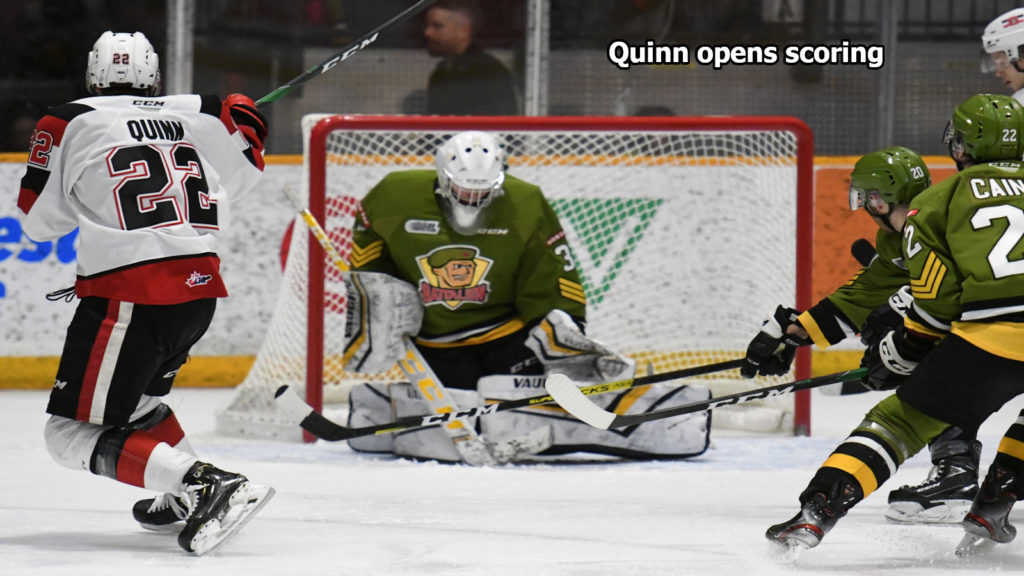 Marco Rossi scored one goal and added three assists, Mitchell Hoelscher and Teddy Sawyer each had one goal and one assist and Daylon Groulx also scored for the 67’s, who boast a won-lost-extended record of 49-11-1 for 99 points atop the East Division, Eastern Conference and league. Goaltender Will Cranley made 19 saves for his fourth shutout of the season.

Goaltender Cameron Lamour faced 46 shots before a Memorial Gardens crowd of 1,999 for North Bay, which shocked the 67’s with a 6-2 upset in their previous visit Feb. 20. The Battalion, 17-41-4 for 38 points, is fifth and last in the Central Division and league.

With all three teams having six games to play, North Bay trails the Kingston Frontenacs and Niagara IceDogs by four points for the eighth and final conference playoff berth. The Sudbury Wolves blanked visiting Kingston 8-0, while the Peterborough Petes pounded host Niagara 12-1.

“It was a really tough day,” said interim coach Ryan Oulahen of the Battalion. “The best part is we can just forget about this as quickly as possible. We had a hard time generating a lot today. We got in trouble going to the penalty box way too often. We’re not going to dwell on it. I know the score got out of hand, but we didn’t quit. We kept fighting right to the end.”

Quinn struck first at 5:02 of the opening period, cutting across the slot and slipping a backhander between Lamour’s pads. Quinn, with his 51st goal of the season, made it 2-0 on the power play at 16:40, ripping a shot from the right-wing circle over Lamour’s glove.

The Troops, who killed a five-minute manpower disadvantage after Christian Stevens was banished for a head check on Groulx at 6:04, were outshot 12-5 in the frame but tested Cranley twice. Braden Henderson fired a drive off the left wing in the 12th minute, and Cranley took a Liam Arnsby shot off the mask in the 18th.

Groulx scored at 2:03 of the second period, driving to the net to bury an Austen Keating feed, and Hoefenmayer drifted into the left circle to wire the puck high over Lamour’s blocker at 6:12. Defenceman Hoefenmayer then whipped home a one-timer from the right circle on the power play at 8:55. Penalty killer Hoelscher staged a two-on-one rush with Quinn and slipped the puck under Lamour’s right pad at 13:29 to make it 6-0.

North Bay was shorthanded for much of the third period, and Ottawa capitalized twice with the man advantage. Rossi, who paces OHL scoring with 38 goals and a league-high 78 assists for 116 points in 55 games, tipped a Kevin Bahl shot at 4:31, and rearguard Sawyer converted the last of three rapid-fire chances from the lip of the crease at 11:17.

The game, played on edge, came perilously close to mayhem in the final period as referees Aaron Neely and Matt Scott reaped the results of their bad and non-calls. Bahl even managed to maul linesman Brendan Kane, without penalty, while pursuing Alex Christopoulos late in the second frame after he objected to Groulx’s head check on Paul Christopoulos. Groulx, who should have been banned with Stevens, was assessed a major and game misconduct.

The Battalion plays host to the Mississauga Steelheads at 7 p.m. Thursday on Smiles for Life Night presented by Callander Bay Dental in support of Rotary4Kids.

BATTALION BULLETS: On Pepsi Minor Hockey Day, fans filled out ballots for a chance to win a mini-fridge, and Dr Pepper samples and other soft drinks were awarded at the end of the game while supplies lasted … The teams completed their season series, with the Battalion posting a record of 1-3-0 … The Troops, two of whose manpower advantages came in the final 3:25, the second lasting 41 seconds, went 0-for-5 on the power play. Ottawa’s league-leading power play was 4-for-8 … Opening lines featured Luke Moncada centring Shane Bulitka on left wing and right winger Brandon Coe, Mason Primeau pivoting left winger Harrison Caines and right winger Chad Denault and Arnsby centring left winger Kyle Jackson and right winger Alex Christopoulos. Josh Currie centred left winger David Campbell and Stevens on right wing … The Battalion scratched Pacey Schlueting, Simon Rose, Avery Winslow and Mitchell Russell … Rossi has a six-game points streak in which he has four goals and nine assists for 13 points. In four games against the Troops, he had three goals and eight assists for 11 points … Quinn has a six-game points streak during which he has six goals and as many assists for 12 points. In four games against North Bay, Quinn had four goals and six assists for 10 points … Hoelscher has a six-game points streak in which he has three goals and six assists for nine points.