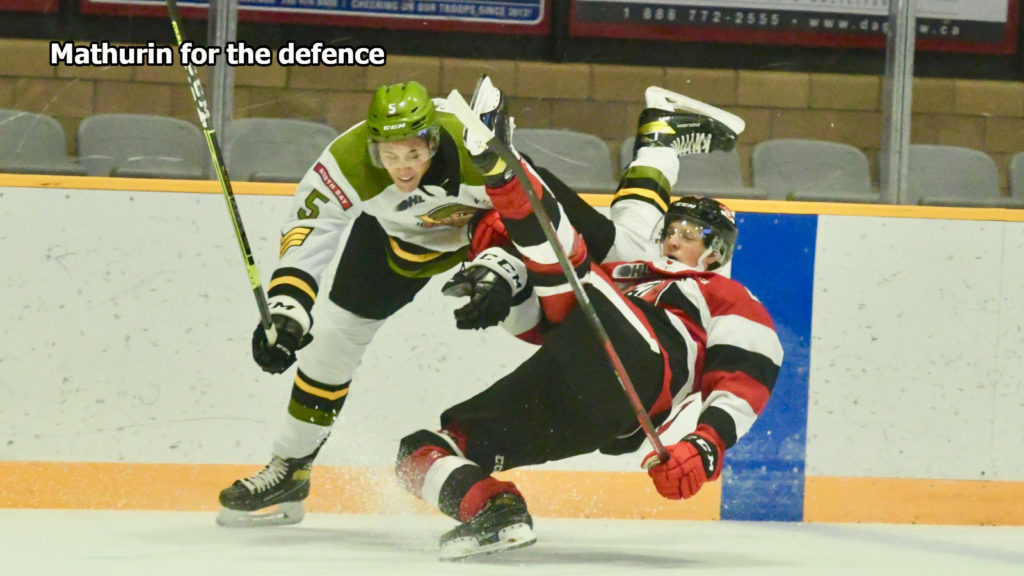 NORTH BAY, Ont. — Vsevolod Gaidamak scored one goal and assisted on another as the Ottawa 67’s downed the North Bay Battalion 4-1 Saturday to grab a split of their preseason home-and-home series.

The Battalion dressed 17 skaters, one below the limit, with 11 forwards and six defencemen in uniform, as was the case at Ottawa, where the Troops prevailed 3-2 Friday night. The 67’s had a full contingent of 18 skaters.

Sirizzotti opened the scoring at 1:32 of the second period, but the Battalion answered 40 seconds later when Owen Outwater and Wakely staged a two-on-one rush, with Outwater sending a pass to Wakely on the left side for a conversion that gave MacKenzie no chance.

Stonehouse struck 33 seconds after that for what proved to be the winning goal, using a decoy on a two-on-one sortie and firing the puck past a collapsing defender.

Gaidamak connected on the power play at 18:43, taking a pass at the right post on the back door and seeing the puck trickle past Proulx.

After trailing 3-1 entering the third period, the Battalion outshot Ottawa 12-7 in the final frame, but Robinson collected the only goal, redirecting a right-point shot by Thomas Sirman through traffic at 11:02.

The teams battled through a scoreless opening period in which North Bay had a 9-8 edge in shots. Ottawa’s Will Gerrior tipped the puck off the right post in the third minute, and Proulx snagged a drive by Gaidamak at 18:25 after he was sent alone up the middle.

The Battalion served three minor penalties in the period to Ottawa’s one, but the Troops dominated while shorthanded the first time, with Kyle Jackson and Owen Van Steensel among those who gave the 67’s as much as they could handle.

The Battalion was short two men for eight seconds in the 14th minute after a delay-of-game call against Cam Gauvreau for putting the puck into the stands and a slashing minor to Wakely, but the penalty killers dispensed with the problem.

Referees Drew Jackson and Matt Scott made slashing the penalty of the day, as the infraction accounted for five of 10 minors issued. It almost was a majority of calls, as Outwater was assessed a high-sticking penalty at 19:57 of the third period.

The Battalion completes its preseason schedule with a visit to the Owen Sound Attack at 2 p.m. next Saturday.