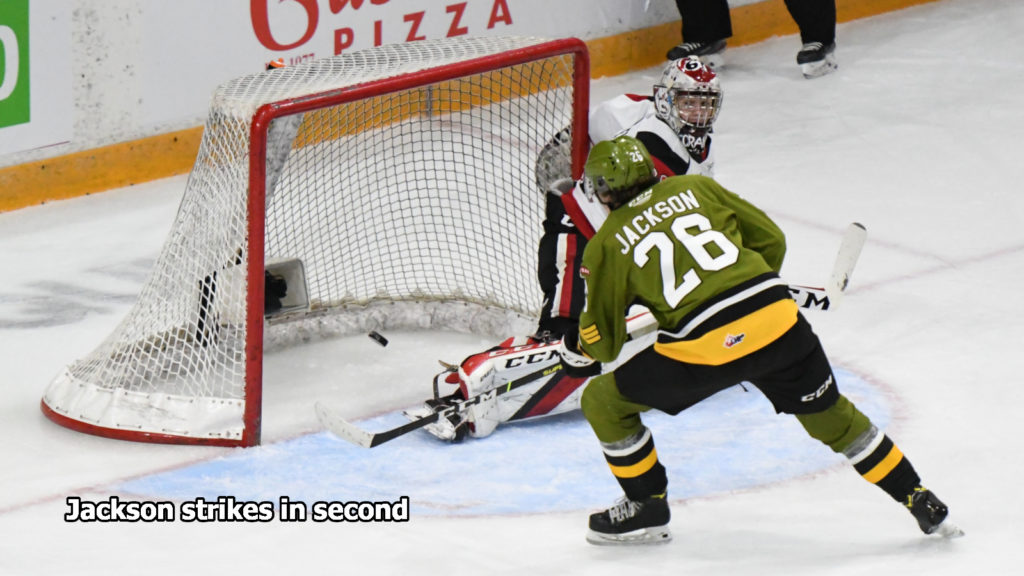 OTTAWA — Vsevolod Gaidamak scored at 2:11 of overtime to lift the Ottawa 67’s to a 3-2 victory over the North Bay Battalion in Ontario Hockey League action Saturday as the Troops completed a three-game eastern swing.

Brady Stonehouse and Cameron Tolnai also scored for Ottawa, and Gaidamak had an assist to accompany his team-leading 12th goal of the season.

Goaltender Will Cranley faced 22 shots for Ottawa, which snapped a four-game losing streak and moved its won-lost-extended record to 11-8-2 for 24 points and second place in the East Division.

Kyle Jackson had one goal and one assist and Ty Nelson the other goal for North Bay, 13-7-2 for 28 points atop the Central Division and Eastern Conference. Goaltender Joe Vrbetic made 29 saves before 2,840 at the TD Centre.

The game, which ended a series of three games in as many days for the Battalion, came after a 5-3 loss Thursday night to the Peterborough Petes and a 5-2 victory Friday night over the Kingston Frontenacs.

Brandon Coe assisted on Jackson’s goal and leads the OHL scoring race with 39 points, on 11 goals and a league-high 28 assists.

Assistants Scott Wray and Bill Houlder again ran the Battalion bench in the absence of coach Ryan Oulahen, who dealt with a personal matter.

Gaidamak netted the winner when he drove deep on the left wing to convert a weird rebound off the end glass of a missed shot by Teddy Sawyer. The puck went to the left side rather than straight back or to the nearer right wing. Vinzenz Rohrer had the second assist on the rush.

Tolnai tied it 2-2 at 11:00 of the third period when he went to the goalmouth, took a pass Cooper Foster and put a subtle deke on Vrbetic, with Sawyer drawing the other assist.

Liam Arnsby and Ottawa’s Derek Smyth fought at 6:44 of the period, with Arnsby landing a solid right that ended Smyth’s efforts and earned the takedown. Each player was assessed a fighting major, with Smyth handed an instigating minor and misconduct.

After the teams tied 1-1 through 20 minutes, Jackson scored at 17:09 of the second period off a nifty passing play with Matvey Petrov and Coe, who found Jackson open on the left side for his 14th goal.

The Battalion’s Josh Currie, initially signaled for a holding call, was assessed a match penalty for slew-footing at 3:12 after a video review. The last 1:22 of the five-minute manpower discrepancy was offset when Jack Matier went off for interference.

The Battalion broke out strong in the first period, hemming the 67’s in their own zone on several occasions, but Ottawa scored first when, after a zone entry that appeared offside, Stonehouse connected at 13:34, knocking home a puck that leaked into open ice in the crease.

Nelson replied at 19:37, driving up the middle to convert a quick pass from Jackson behind the goal line. It was the fifth goal for rookie defenceman Nelson, the first overall pick in the 2020 OHL Priority Selection.

Paul Christopoulos and Ottawa’s Thomas Sirman received fighting majors for a bout at 10:27 after Christopoulos objected to Sirman riding Alexander Lukin into the boards and, after he fell, spearing the Russian import.

The Battalion visits the Hamilton Bulldogs at 7 p.m. Friday. The game can be seen live in North Bay on YourTV Channels 12 and 700.

BATTALION BULLETS: It was the teams’ third meeting, after the host 67’s won 2-1 on a last-minute penalty shot by Dylan Robinson on Nov. 7 and the Battalion prevailed 3-0 at home Nov. 18. The fourth of six meetings is scheduled Jan. 30 at North Bay … Robinson has been suspended eight games after receiving a head-checking major and game misconduct in a 4-2 road loss Nov. 19 to the Sudbury Wolves. He is eligible to return Dec. 10 … The Battalion went 7-2-2 in November … Overager Coe has an 11-game points streak in which he has five goals and 18 assists for 23 points. His 11-game assists streak is the longest in the OHL this season … Petrov has an eight-game points streak in which he has six goals and nine assists for 15 points … Avery Winslow topped the Troops with five shots on goal, while Lukin had four … North Bay’s Michael Podolioukh turns 17 Sunday … Each team went 0-for-2 on the power play … The Troops bused to Ottawa immediately after the Kingston game … The Battalion again was without Tnias Mathurin, injured at Peterborough, and Owen Outwater, who’s at the Capital City Challenge, which features three Canadian under-17 teams and the national women’s team, at Ottawa … Among the missing for Ottawa were Ranvir Shane-Gill, Jack Beck and Chris Barlas, who is at the under-17 tournament … Danny Emerson and Anthony Tapper were the referees.