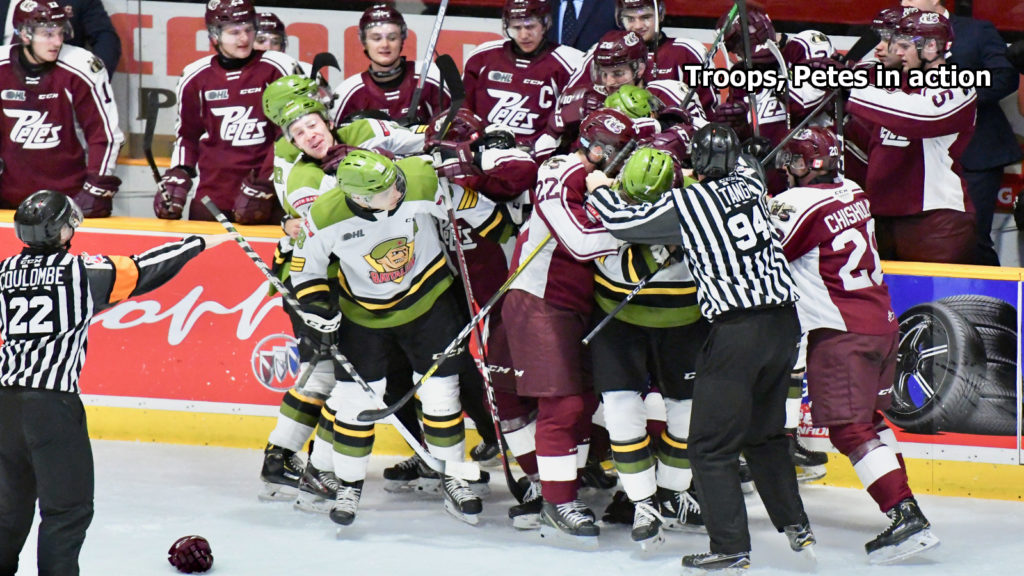 Nick Robertson and Semyon Der-Arguchintsev each contributed one goal and one assist and J.R. Avon also scored as the Petes continued a run of nine road games during renovations to the Peterborough Memorial Centre.

Goaltender Hunter Jones made 29 saves for the Petes, who have a won-lost-extended record of 3-1-0.

“I felt bad for him on the third and fourth goals. On the fourth goal, he makes the initial save, and we have three guys standing beside McTavish and he just outworks them and puts the puck in the net.”

The game was tied 2-2 late in the third period when the Petes struck for two goals 13 seconds apart. Robertson netted the winner at 15:07, sweeping the rebound of Declan Chisholm’s shot from the blue line around Vrbetic’s left pad on the backhand, and McTavish followed, jamming a loose puck home from the lip of the crease.

The visitors scored first at 9:03 of the opening period. Vrbetic stopped Matt McNamara’s shot off the right wing but kicked the rebound to Avon, who was unguarded in the slot.

Primeau’s second goal of the season tied it at 17:09 as he redirected Braden Henderson’s right-point lob past Jones from deep in the right circle. Pacey Schlueting earned the second assist, his first point of the campaign.

Rookie McTavish made it 2-1 at 7:40 of the second period, one second after a crosschecking penalty to Henderson expired. McTavish, who has four goals, moved into the left circle and beat Vrbetic between the legs.

Penalty killer Moncada replied at 19:16 as he took a feed from Brad Chenier, eluded Chisholm and put a wrister over Jones’s glove.

Vrbetic, who faced 20 shots in the period, turned away good chances by McTavish, Robertson, Der-Arguchintsev and Zach Gallant. The Battalion had 13 shots, testing Jones often late in the period. Cameron Peters drove to the net in the 16th minute and was followed quickly by Niki Korpialho, who made a strong move off the right wing.

The Battalion visits the Oshawa Generals at 7:35 p.m. Friday.

Guskov landed from London
11 hours ago

Nelson signs with Battalion
2 months ago