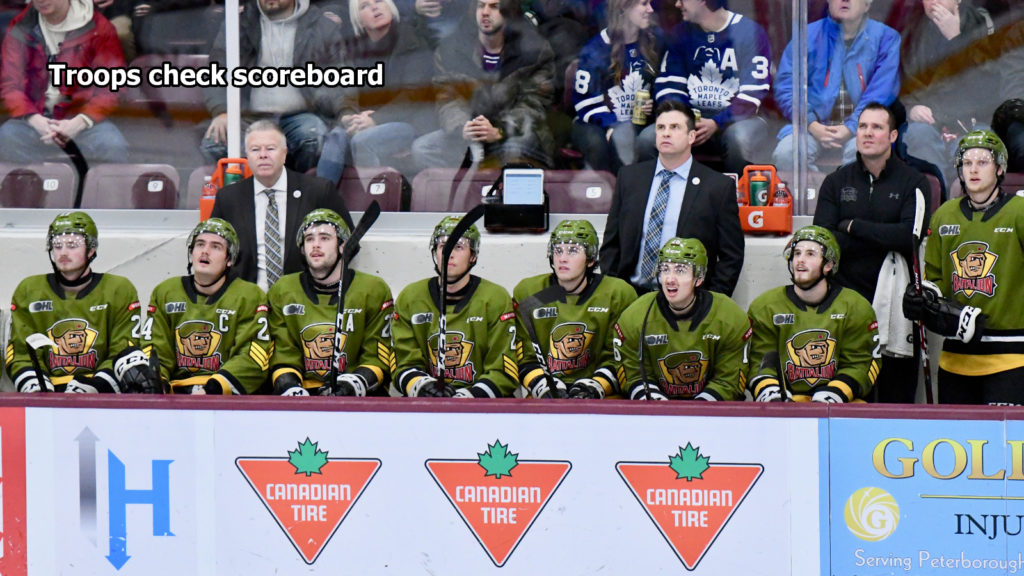 PETERBOROUGH, Ont. — Mason McTavish scored two goals to lead the Peterborough Petes to a 6-1 victory over the North Bay Battalion in an Ontario Hockey League game Thursday night as the Troops opened a three-game road trip.

Cameron Butler contributed one goal and two assists and Zach Gallant, Max Grondin and John Parker-Jones also scored for Peterborough, which has a won-lost-extended record of 17-6-2 for 36 points, tied atop the East Division, Eastern Conference and league with the Ottawa 67’s. Goaltender Tye Austin, who lost a shutout bid in the final minute, made 25 saves.

Peterborough outshot the Troops 20-10 in the first period on the way to seizing a 4-0 lead, with rookie McTavish opening the scoring at 5:47 when he beat Cicigoi from the left-wing circle.

Gallant connected on the power play at 13:08, eight seconds after Pacey Schlueting went off for slashing. Gallant got behind Grima in the goalmouth and redirected Declan Chisholm’s shot from the blue line.

Grondin hammered a cross-ice pass from Hudson Wilson past a sliding Cicigoi from the right circle at 16:36, and the Petes took advantage of a Schlueting turnover when Parker-Jones converted from the lip of the crease at 17:37.

Austin was sharp on the Battalion’s first shot, kicking away a Brad Chenier effort in the sixth minute. Matthew Struthers, who had a close-range chance in the 10th minute, tested Austin off the right wing in the 15th.

Butler struck on the power play at 19:27 of the second period. Cicigoi stopped Butler’s initial shot from the left circle, but he converted his own rebound from the lip of the crease.

The Battalion, outshot 11-7 in the period, had some good chances early, but Austin denied Struthers, Brandon Coe and Harrison Caines.

McTavish made it 6-0 at 4:47 of the third period, whipping a wrister high over Cicigoi’s stick from the edge of the right circle, before Grima took a Chenier pass from the end boards and beat Austin at 19:46. It was defenceman Grima’s second goal of the season, both coming in the last two games.

The Battalion continues the road trip at 7 p.m. Friday against the Kingston Frontenacs. The game can be seen live in North Bay on YourTV Channels 12 and 700 and heard on Country 600 CKAT.

BATTALION BULLETS: It was the third of four games between the teams, after the Petes won twice at North Bay, 5-2 on Oct. 3 and 8-3 on Nov. 3. The season series is to wrap up Feb. 6 at Peterborough … Cicigoi, who backed up Joe Vrbetic in the previous six games, saw his first action since a 6-4 road loss Nov. 9 to the Windsor Spitfires … Adam Dennis, a Battalion assistant coach and assistant general manager, was away scouting … North Bay went 1-for-2 on the power play. Peterborough was 2-for-3 … Opening lines included Luke Moncada centring left winger Chenier and right winger Coe, Struthers pivoting left winger Kyle Jackson and right winger Mitchell Russell and Cameron Peters centring left winger Caines and Liam Arnsby on right wing. Josh Currie centred left winger Niki Korpialho and right winger Alex Christopoulos … The Battalion was without Mason Primeau and Paul Christopoulos, who served the first game of a two-game suspension after he incurred a match penalty for a slew-foot in a 4-3 home-ice win Sunday over the Niagara IceDogs … The Troops bused to Kingston after the game … Peterborough was without Nick Robertson and Chad Denault … Gallant has four goals and one assist for five points in the last four games … In three games against North Bay, Butler has three goals and as many assists for six points … The referees were Joe Celestin and Carter Sandlak.