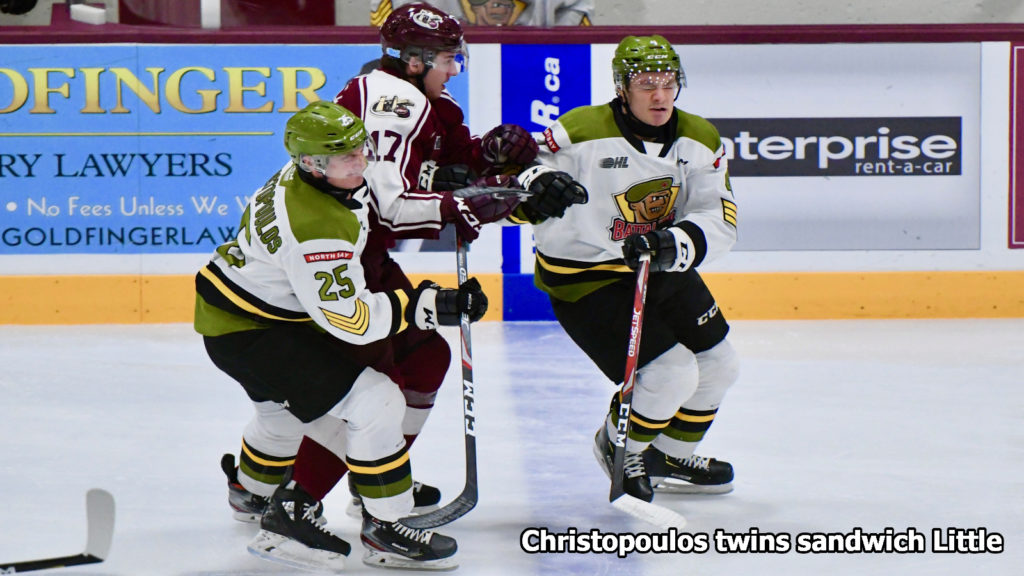 Mason McTavish contributed two goals and one assist, Declan Chisholm and Akil Thomas each had one goal and two assists and Brady Hinz and Tucker Robertson also scored for Peterborough, which has a won-lost-extended record of 30-19-3 for 63 points, second in the East Division.

Goaltender Hunter Jones made 30 saves before 3,156 at the Peterborough Memorial Centre.

Alex Christopoulos had one goal and one assist for North Bay, which also got goals from Paul Christopoulos and Brandon Coe in opening a three-game road trip. It marked the first time the rookie Christopoulos twins have scored in the same game.

Goaltender Cameron Lamour faced 37 shots for the Battalion, 11-36-2 for 24 points, fifth and last in the Central Division.

Defenceman Chisholm opened the scoring at 9:29 of the first period when he fired the puck home from the top of the right-wing circle five seconds after Coe went off for tripping.

Peterborough, which had four power plays in the period, outshot the Troops, who had one, 12-8. The Battalion’s best chance came in the fourth minute when Coe made a strong move to the net off the left wing only to be denied by Jones. The goaltender blocked a Pacey Schlueting effort in the 11th minute, with Mitchell Russell sweeping the rebound wide.

Alex Christopoulos tied it at 6:33 of the second period, stripping Jones of the puck behind the net and wheeling around it to slide the disc inside the left post for a seventh goal on the season.

The Petes responded with four goals in a span of 5:29, including two 44 seconds apart. Hinz sparked the flurry by lifting a Jacob Paquette rebound over Lamour at 9:44, and rookie McTavish put the puck over the goaltender’s glove from the right circle at 10:28.

Nick Robertson scored two goals 1:58 apart. He eluded Liam Arnsby in the slot and ripped the rubber over Lamour’s blocker at 13:15 for what proved to be the winner, then struck shorthanded at 15:13, taking the puck off Simon Rose before driving to the net and beating Lamour.

It was Robertson’s team-leading 41st goal. Robertson, on an OHL season-high 13-game goals streak, has a 14-game points run in which he has 18 goals and 10 assists for 28 points.

The Christopoulos brothers combined on North Bay’s second goal, on the power play at 17:14. Alex drove to the net, with Jones kicking away the shot, and defenceman Paul darted deep to convert the rebound for his third goal. James Mayotte had the second assist.

Tucker Robertson wired home a wrister from deep in the right circle at 3:48 of the third period, and the teams were skating four-on-four when Thomas broke in on Lamour and lifted a backhander over the goaltender’s right pad at 10:16. In 12 straight games with at least one point since a trade from the Niagara IceDogs, Thomas has four goals and 20 assists for 24 points.

Coe beat Jones to the stick side from deep in the left circle at 14:42. Rose and Luke Moncada assisted on Coe’s 17th goal before McTavish finished the scoring at 16:23 with his 29th tally.

The Battalion visits the Kingston Frontenacs at 7 p.m. Friday. The game can be seen live in North Bay on YourTV Channels 12 and 700 and heard on Country 600 CKAT.

BATTALION BULLETS: The teams’ fourth and last meeting of the season completed a Peterborough sweep. The Petes posted wins of 5-2 on Oct. 3 and 8-3 on Nov. 3, both at North Bay, and 6-1 at home Nov. 28 … Moncada has a four-game points streak during which he has three goals and three assists for six points … Coe has a four-game points streak in which he has one goal and five assists for six points … The Battalion went 1-for-4 on the power play. Peterborough was 1-for-6 … Opening lines included Moncada centring left winger Harrison Caines and right winger Coe, Shane Bulitka pivoting left winger David Campbell and right winger Russell and Arnsby centring left winger Kyle Jackson and right winger Alex Christopoulos. Christian Stevens centred left winger Josh Currie and right winger Chad Denault … The Battalion was without Avery Winslow, Mason Primeau and Braden Henderson … Rose returned from a two-game suspension assessed for an alleged check from behind late in a 4-3 loss Jan. 30 to the visiting Guelph Storm … Denault faced his former Petes teammates for the first time since a Dec. 4 trade … Among the missing for Peterborough, which dressed 16 skaters, two below the limit, were Liam Kirk and Semyon Der-Arguchintsev … In three games against the Battalion, McTavish had six goals and one assist for seven points … The referees were Dave Lewis and Pat Myers.