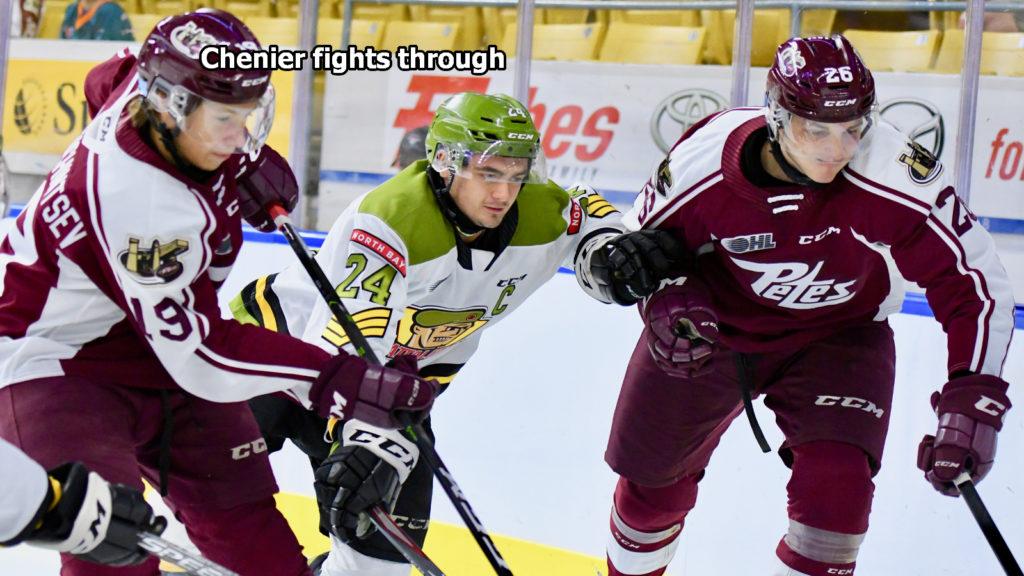 Simon Rose had one goal and one assist and Brad Chenier the other goal for North Bay, which saw goaltender Christian Purboo face 41 shots.

Kavanagh tied it 2-2 at 2:15 of the final frame after Dustin Hutton produced a turnover for his second assist of the game. Defenceman Kavanagh wheeled in from the right point and wired the puck past Purboo high to the glove side.

Butler netted the winner with the teams skating four-on-four at 7:57, tipping a David Maier drive from high in the zone between Purboo’s legs.

The Battalion pulled Purboo for an extra attacker with a minute to play but couldn’t find the equalizer despite applying good pressure, including a last-ditch shot from deep on the right wing in the final second.

Defenceman Rose gave the Troops a 1-0 lead on the power play at 2:12 of the second period with a shot from the left point, and Chenier doubled the advantage at 13:51 when he one-timed home a pass from David Campbell off a two-on-one rush. Rose had the other assist.

Kirk replied on the power play at 19:38, putting his own rebound over Purboo from the left side. The initial shot hit the goaltender in the neck, stunning him. Athletic trainer Andrew Sachkiw tended to Purboo briefly before play resumed, and the goalie was bent at the waist as he left the ice for the intermission.

The Battalion plays the Saginaw Spirit at 11 a.m. Sunday to wrap up its showcase play with the third of a total of five preseason games. North Bay visits the Owen Sound Attack at 2 p.m. Saturday, Sept. 14, and entertains Owen Sound the next day.