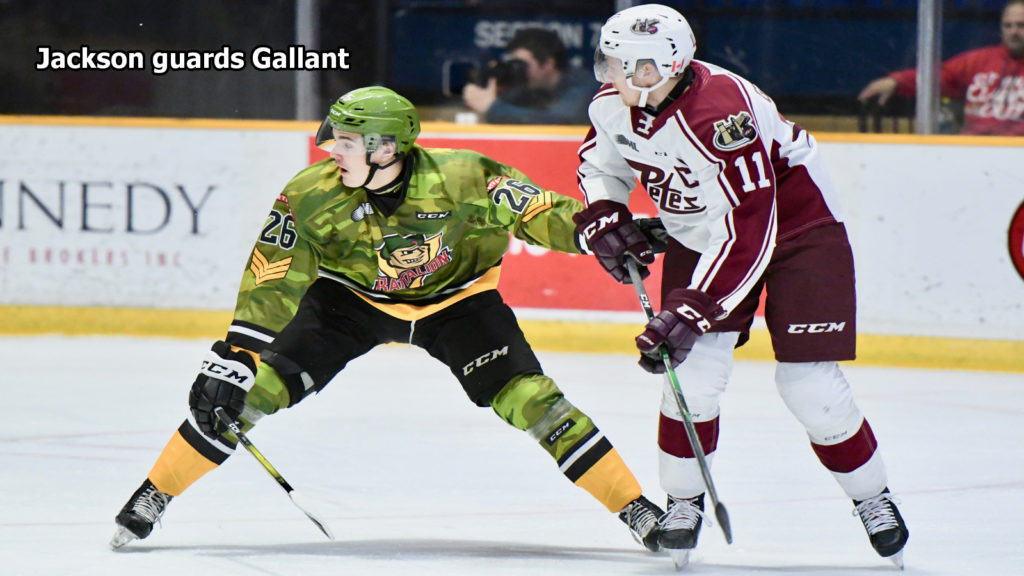 Nick Robertson scored two goals, Liam Kirk and Brady Hinz each had one goal and two assists, Zach Gallant recorded one goal and one assist and Keegan McMullen also scored for Peterborough, which moved its won-lost-extended record to 11-5-0 for 22 points, third in the East Division. Goaltender Hunter Jones faced 30 shots.

Alex Christopoulos, Brad Chenier and Niki Korpialho scored for North Bay, while goaltender Joe Vrbetic made 44 saves before 2,120 at Memorial Gardens. The Battalion is 3-13-0 for 12 points, fifth in the Central Division.

The Troops, who wore camouflage sweaters and socks on Military Appreciation Day, were without Brandon Coe, who began a two-game suspension for a purported slew-foot on Liam Ross in a 3-2 loss Friday night to the visiting Sudbury Wolves.

“I really liked our game on Friday,” said Battalion coach Stan Butler. “We played hard and we were competitive, and in the first seven or eight minutes today we didn’t compete at all. Once we made it 3-1, I thought, the last 10 minutes of the period were pretty good. We score a shorthanded goal in the second period and they scored right after that to make it 4-2, and our guys just seemed to give up. We had a five-minute power play and a five-on-three for a significant amount of time, and we didn’t take advantage of them.”

Kirk opened the scoring with his 10th goal of the season at 8:37 of the first period before Robertson connected on the power play at 11:46 when his drive from the right-wing circle trickled between Vrbetic’s pads. Robertson struck again at 13:09 for his team-leading 19th goal, ripping a back pass from Semyon Der-Arguchintsev from the left circle.

Christopoulos replied nine seconds later as he took a pass from Harrison Caines, moved around Josh Kavanagh and tucked a backhander between Jones’s legs. Braden Henderson had the other assist on Christopoulos’s second goal.

Penalty killer Chenier cut the deficit to one goal at 8:53 of the second period. Chenier seized the puck from David Maier at the Battalion blue line and raced in on Jones, beating him to the stick side. It was the Troops’ fourth shorthanded goal and the first by someone other than Luke Moncada.

The Petes answered 25 seconds later, four seconds after their power play expired, as McMullen deflected Shawn Spearing’s drive for what proved to be the winner, and Hinz made it 5-2 at 13:15. Gallant stole the puck behind the net, and Michael Little sent the disc across the crease, with Hinz flicking it home.

The Petes were credited with 25 shots in the period, surpassing the season high of 20 allowed by the Battalion, in the second period of a 5-2 home-ice loss to Peterborough on Oct. 3. The 52 shots the Troops surrendered surpassed the previous season high of 46 in the same game.

The Battalion, which had six shots, started the period with a two-man advantage for 1:27 but failed to capitalize, despite Nick Grima and Mitchell Russell each enjoying a good chance.

North Bay went on the power play for five minutes at 4:02 of the third period after Little drew a match penalty for slew-footing, which referees Nick Gill and Mike Hamilton at first wrongly issued to the Battalion’s Cameron Peters. The Troops had four shots with the man advantage, their best chance coming when Jones’s clearing attempt hit Matthew Struthers in the deep slot and Russell was unable to convert the rebound.

Butler scored on the power play at 11:18, swinging across the goalmouth and steering the puck around Vrbetic.

Korpialho shoveled a Pacey Schlueting rebound behind Jones at 15:46, with Mat Hardwick also assisting on Korpialho’s second goal. Gallant finished a three-way passing play with Hinz and Kirk just 10 seconds later, and Butler scored with the teams skating four-on-four at 18:53.

The Battalion opens a three-game road trip against the London Knights at 7:30 p.m. Friday. The game can be seen live on YourTV Channels 12 and 700 and heard on Country 600 CKAT.

BATTALION BULLETS: Pregame ceremonies featured military personnel, including veteran Dave Innes, who won a silver medal in indoor rowing, one of three sports in which he competed, at the 2018 Invictus Games at Sydney, Australia. The Military Wives Choir sang O Canada, and more than 200 fans from the Military Family Resource Centre attended the game … The Battalion went 0-for-4 on the power play. Peterborough was 2-for-5 … Opening lines featured Moncada centring left winger Chenier and Struthers on right wing, Mason Primeau centring left winger Kyle Jackson and right winger Russell and Peters pivoting left winger Caines and right winger Christopoulos. Josh Currie centred left winger Korpialho and right winger Hardwick … Apart from Coe, the Battalion was without Ryan Thompson and Liam Arnsby, who’s with Canada White at the World Under-17 Hockey Challenge … The Battalion called up Hardwick from the Powassan Voodoos of the Northern Ontario Junior Hockey League to fill in for Coe. Hardwick, a 12th-round pick in the 2017 OHL Priority Selection from the North Bay Trappers midgets, has four goals and eight assists for 12 points in 18 games with junior A Powassan … Rookie McMullen’s goal was his first in the OHL. He was a 15th-round pick, the 300th and last overall, in the 2018 OHL Priority Selection from the Cambridge Hawks minor midgets.