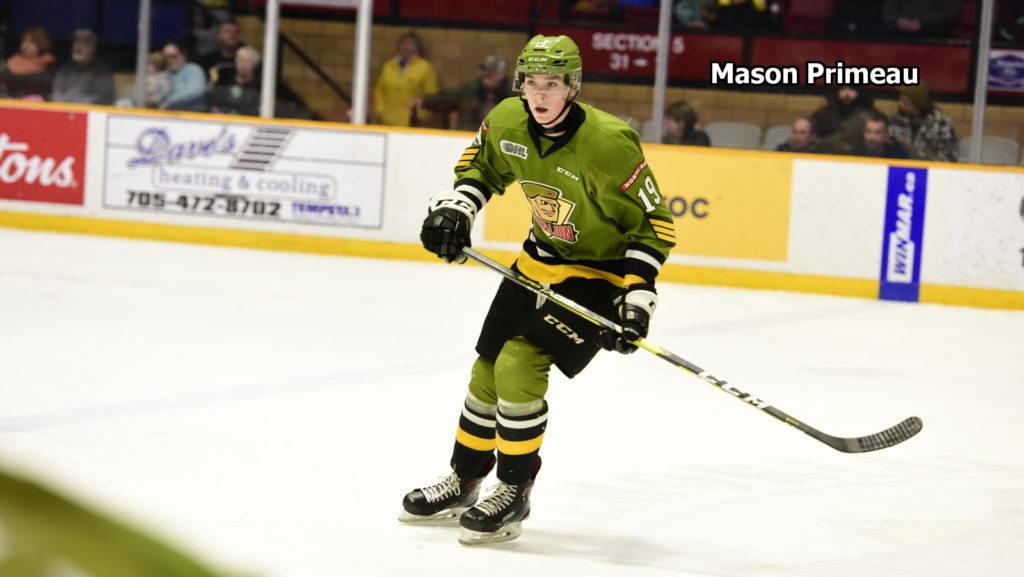 NORTH BAY, Ont. — With news that Mason Primeau has signed a National Hockey League contract, the North Bay Battalion has turned again to its own future, trading three picks in the Ontario Hockey League Priority Selection this weekend to the Saginaw Spirit for a total of four choices from 2022 to 2024.

Saginaw receives North Bay’s second-round selection, the Oshawa Generals’ sixth-rounder and the Battalion’s 10th-rounder this year, leaving the Troops with 17 selections in the 15-round process, which is to start at 7 p.m. Friday with the first three rounds, followed by the fourth through 15th rounds beginning at 9 a.m. Saturday.

In the trade announced Tuesday, North Bay gets Saginaw’s 10th-round pick in 2022, the Windsor Spitfires’ fifth-round selection in 2023, the Kingston Frontenacs’ 2024 second-rounder and Saginaw’s 2024 sixth-rounder.

The Battalion retains its own first-round pick this year, the Sarnia Sting’s second-rounder and Oshawa’s and North Bay’s picks in each of the third and fourth rounds. Without a fifth-rounder, the Troops have at least one pick in each of the sixth through 15th rounds, including Kitchener’s in the 10th round. In addition to their own, they hold Kingston’s choice in the 12th round.

“Our feeling is that, with the large number of players coming in from last year’s Priority Selection and the strength of our returning players, it was best to put a few picks away for future years and give us a more manageable number at training camp,” said general manager Adam Dennis.

“Our staff has continued to work hard on the 2005 age group, and we look forward to adding to an already strong group of young players.”

North Bay selected defenceman Ty Nelson of the Toronto Jr. Canadiens with the No. 1 pick in April last year after finishing last overall in the 2019-20 season, which was cut short by the coronavirus pandemic. With the cancellation of the 2020-21 campaign, Nelson, who turned 17 on March 30, has yet to make his Battalion debut.

The OHL Priority Selection, to be conducted over the internet, primarily will see the top-ranked 2005-born players within the OHL’s selection area chosen.

The NHL’s Vegas Golden Knights announced the signing of centre Primeau to a three-year entry-level contract.

Vegas selected Primeau, who turns 20 on July 28, in the fifth round of the 2019 NHL Draft. He played 10 games in 2020-21 with the affiliated Henderson Silver Knights of the American Hockey League, earning three assists. He also had one goal and two assists for three points in four games with the ECHL’s Fort Wayne Komets.

The Battalion acquired Primeau, a second-round pick by the Guelph Storm in the 2017 OHL Priority Selection, in a trade Nov. 15, 2018. The six-foot-six, 210-pound Toronto resident scored 21 goals and added 24 assists for 45 points in 94 games with North Bay over one and a half seasons.

“We as a staff have all witnessed the work that’s been put in to earn this contract,” said Dennis. “Mason’s work ethic has been infectious since he came to North Bay, and it certainly didn’t go unnoticed during his time in Henderson.

“We’re very proud of Mason’s accomplishments and thank him for his contributions.”