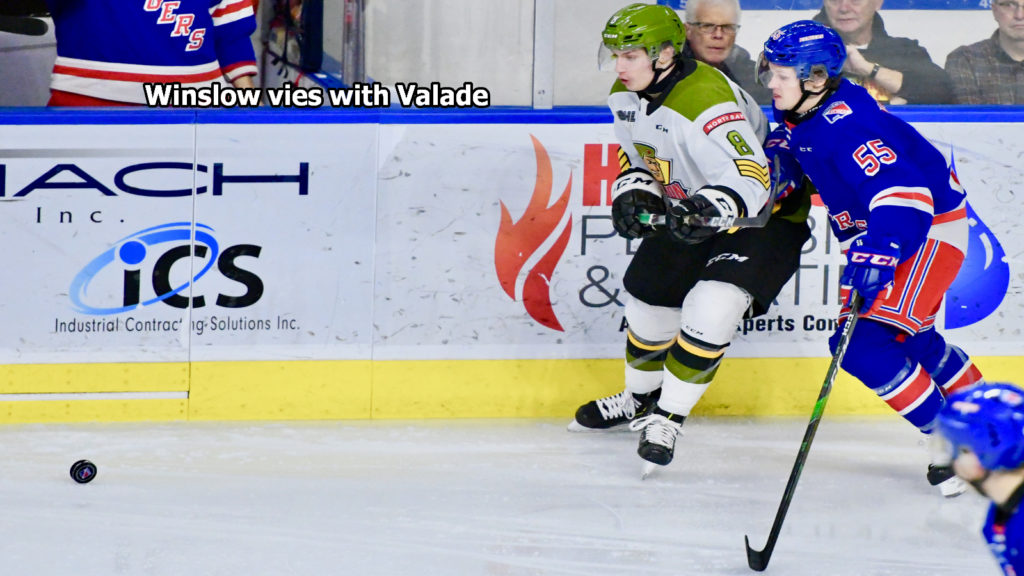 KITCHENER, Ont. — Declan McDonnell scored two goals and added an assist to pace the surging Kitchener Rangers to a 9-2 victory over the North Bay Battalion in an Ontario Hockey League game Friday night.

Greg Meireles and Riley Damiani each scored two goals, Axel Bergkvist had one goal and two assists, Liam Hawel contributed one goal and one assist and Francesco Pinelli also scored for Kitchener, which moved its won-lost-extended record to 25-11-6 for 56 points atop the Midwest Division. Goaltender Lucas Pfeil made 21 saves before a crowd of 7,011.

The Rangers are 18-1-2 in their last 21 games, the only regulation loss a 6-3 setback Dec. 20 to the visiting Sault Ste. Marie Greyhounds.

Luke Moncada and Josh Currie scored for North Bay, which lost a sixth consecutive game and is 9-30-2 for 20 points, fifth and last in the Central Division.

Starting goaltender Joe Vrbetic allowed seven goals on 32 shots through two periods before being relieved by Cameron Lamour, who gave up two goals on 10 shots in the final frame as the Troops opened a two-game road trip.

Christian Stevens and Avery Winslow, both 17, made their Battalion debuts after being acquired via trades last Friday.

Kitchener raced out to a 3-0 first-period lead, with Pinelli striking first at 7:04, driving to the net off the right wing and putting home his own rebound. Hawel scored at 9:06, blasting the puck over Vrbetic’s glove, and penalty killer Meireles connected at 14:24, eight seconds into a Battalion power play. Meireles eluded Shane Bulitka at the Kitchener blue line and moved in on Vrbetic to snap the puck over the goaltender’s glove.

North Bay, outshot 19-4, tested Pfeil late in the period on a close-in chance by Currie and drives from the right-wing circle by Brandon Coe and Kyle Jackson.

The Rangers scored on their first two shots of the middle period, as Meireles made it 4-0 at 6:01, driving to the net to convert a Hawel feed, and Damiani ripped a drive over Vrbetic’s glove at 7:08.

Moncada replied at 13:19, taking a pass from Coe and beating Pfeil with a wrister to the stick side. Nick Grima also assisted on Moncada’s team-leading 21st goal of the season.

Reid Valade broke past Grima and centred the puck to Damiani, who scored his 19th goal at 17:20, and McDonnell redirected Justin MacPherson’s shot past Vrbetic at 18:30.

McDonnell hoisted a backhander behind Lamour 57 seconds into the third period before defenceman Bergkvist scored on the short side from deep on the left wing at 12:51.

Currie scored his third goal at 19:48, beating Pfeil high to the glove side from the left front of the net. Chad Denault and Winslow earned assists.

The Battalion visits the Niagara IecDogs at 7 p.m. Saturday to complete the trip. The game can be seen live in North Bay on YourTV Channels 12 and 700 and heard on Country 600 CKAT.

BATTALION BULLETS: The teams wrapped up their season series, after the Battalion won 3-2 in overtime at home Sept. 26 … In a trade with Niagara, North Bay acquired Stevens and two OHL Priority Selection picks, an eighth-rounder in 2022 and a third-rounder in 2023, for Cameron Peters and a sixth-round choice in 2022. The Battalion sent the London Knights two OHL Priority Selection picks, a third-round choice in 2023 and a fifth-rounder in 2024, for Winslow … North Bay went 0-for-2 on the power play. Kitchener was 0-for-3 … Opening lines featured Moncada centring Bulitka on left wing and right winger Coe, Mason Primeau pivoting left winger Harrison Caines and right winger Alex Christopoulos and Liam Arnsby centring left winger Jackson and right winger Mitchell Russell. Currie centred Denault on left wing and Stevens on right wing … Defence pairings saw Winslow with Simon Rose, Braden Henderson with Grima and Pacey Schlueting alongside Paul Christopoulos … The Battalion was without James Mayotte, Ryan Thompson and David Campbell… Among the missing for Kitchener was Donovan Sebrango … Coe and Sebrango played Thursday night with other Canadian Hockey League stars selected by the National Hockey League’s central scouting department in the CHL-NHL Top Prospects Game at Hamilton. Coe had an assist for Team White in a 5-3 win over Team Red … The Troops overnighted at Kitchener.