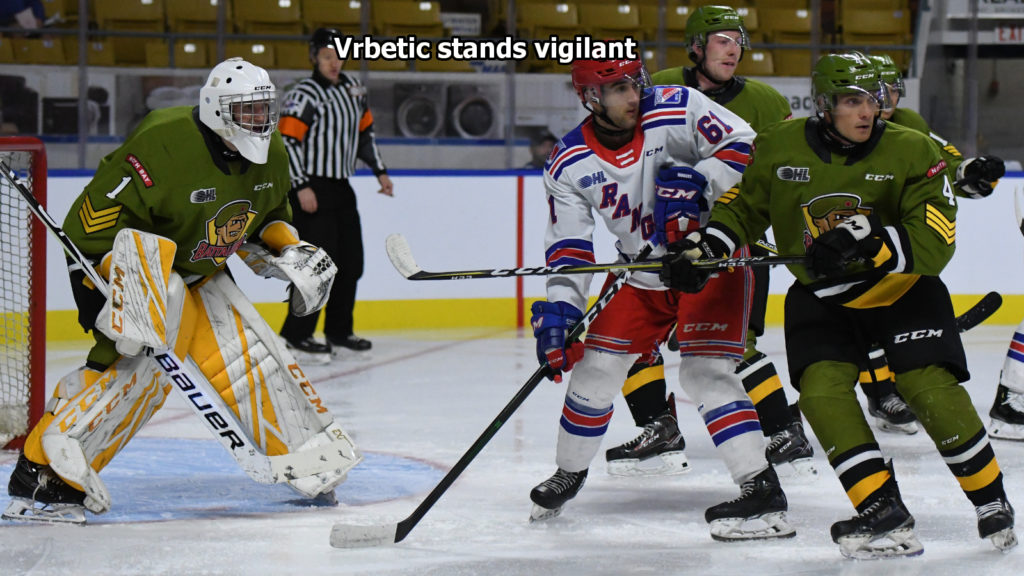 Joseph Serpa and Riley Damiani each scored one goal and added an assist for Kitchener, which got its other goals from Ryan Stepien, Jonathan Yantsis, Greg Meireles and Reid Valade. Goaltender Luke Richardson made 15 saves on the first day of the four-team Preseason Showcase.

The Battalion meets the Peterborough Petes at 2 p.m. Saturday before playing the Saginaw Spirit at 11 a.m. Sunday.

Hardwick scored on the power play at 5:14 of the final period to post the Troops to a 5-2 lead before the Rangers rallied.

Yantsis sparked the comeback with the redirection of a Damiani shot with the man advantage at 8:57, and Meireles tipped a screened left-point drive from Ville Ottavainan just 14 seconds later to make it 5-4.

Damiani struck shorthanded at 12:40, racing down the left wing to beat Vrbetic from the circle before Valade collected the winner at 14:38 on a three-on-two attack as Isaac Langdon and Justin MacPherson drew assists.

Coe connected on the power play at 1:43 of the second period to give the Battalion a 2-1 lead, snapping the puck past Richardson from the left-wing circle.

Serpa scored unassisted at 3:05, poking the rubber home from a scrum in front of Vrbetic after an initial left-point drive, but Chenier put North Bay back in front 10 seconds later on a snap shot off a rush from Arnsby and Christopoulos. Arnsby was the Battalion’s first-round pick in the OHL Priority Selection last June from the Don Mills Flyers minor midgets, where he was a teammate of Christopoulos, a third-round choice.

With the teams skating four a side, Caines connected unassisted at 12:50, ripping a shot from the top of the right circle.

Stepien opened the scoring at 7:17 of the first period off a two-on-one rush against Ty Hollett. Stepien one-timed a cross-ice pass from Serpa on the right wing, with Simon Motew drawing the other assist.

Christopoulos replied at 12:20, chipping home an Arnsby feed off a two-on-one rush from the lip of the crease. Vrbetic was credited with the second assist.

Defencemen Ryan Thompson and Hollett signed standard player’s agreements including education packages with the Battalion to participate in play this weekend, although Thompson has a wrist injury incurred in training camp.

Thompson, who turns 17 on Oct. 10, was a first-round pick in the OHL Under-18 Priority Selection in June from the Toronto Marlboros midgets. Hollett, 16 since Tuesday, was a fourth-rounder in the 2019 OHL Priority Selection from the Navan Grads under-18s.