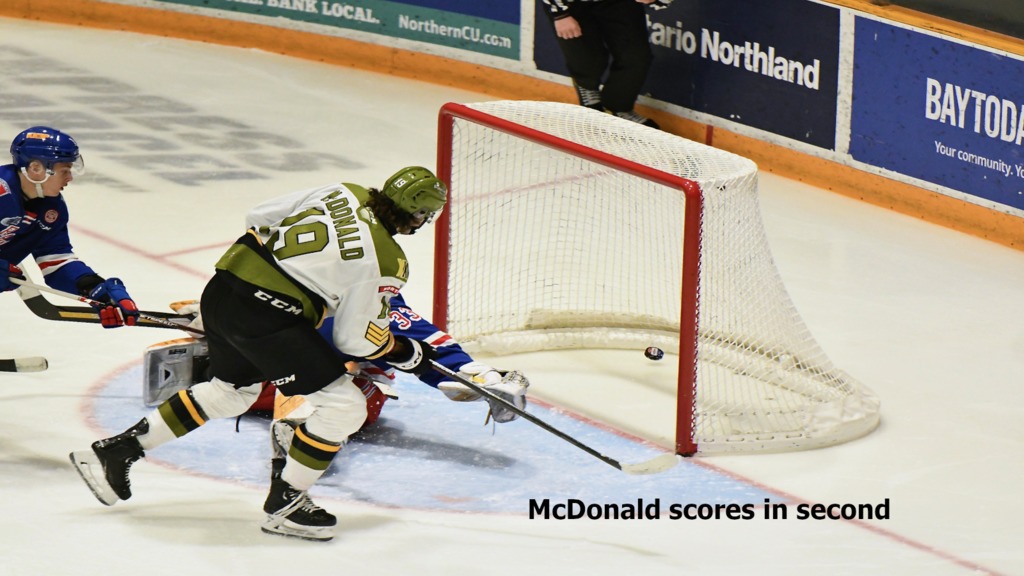 Filip Mesar and Francesco Pinelli each had one goal and one assist and Joseph Serpa also scored for Kitchener, which moved its won-lost-extended record to 7-9-0 for 14 points, fourth in the Midwest Division.

Goaltender Marco Costantini provided 29 saves before a Memorial Gardens crowd of 2,523 who saw the Battalion stage a two-goal third-period rally only to lose for the first time since a 6-3 road defeat Oct. 27 to the host Windsor Spitfires.

Kyle Jackson had one goal and one assist and Kyle McDonald and Dalyn Wakely each contributed one goal, while goaltender Charlie Robertson faced 17 shots for North Bay, 12-5-0 for 24 points, tied for first place in the Central Division with the Mississauga Steelheads, who downed the visiting Kingston Frontenacs 4-3 in overtime.

The Battalion, which trailed 4-1 through 40 minutes, cut into the deficit at 5:50 of the final period when Jackson took a pass from the right-wing corner from Justin Ertel and hoisted a backhander behind Costantini. Matvey Petrov also assisted on Jackson’s seventh goal of the season.

Wakely executed a backhanded redirection of a drive by Paul Christopoulos at 11:41 for a ninth goal, tying him with Petrov and McDonald for the team lead.

After killing a boarding penalty issued to Ertel at 12:23, the Troops stormed the Kitchener zone, skating six against four after Roman Schmidt went off for tripping Wakely at 19:01, but the Rangers, aided by timely stick deflections and the ability to ice the puck, held the lead.

Mesar opened the scoring at 10:06 of the first period off a right-wing faceoff. The puck went to the end boards, and Matthew Sop fed it to Mesar for his sixth goal in nine games since being assigned to Kitchener by the National Hockey League’s Montreal Canadiens, who made him a first-round pick, 26th overall, in the NHL Draft in July.

Ty Nelson blasted a power-play shot from the top of the right circle past Costantini at 11:19, but the play went to video review with first-year referee Jack Hennigan. The apparent goal was disallowed without public explanation, although Ertel, outside the crease, was deemed to have interfered with Costantini.

Seconds later, at 11:55, Serpa got open on the right side for a shorthanded goal, assisted by Reid Valade and Matthew Andonovski.

McDonald replied at 6:12 of the middle period, taking a pass from Owen Van Steensel and going to the forehand to tuck the puck around Costantini. Jackson also assisted.

Pinelli snapped the puck home from the right circle at 10:51, and Swick scored at 18:48, charging into the slot to convert Pinelli’s pass from behind the net. Mesar had the other assist.

BATTALION BULLETS: Tim Hortons Timbits Hockey Day saw North Bay and East Nipissing minor hockey figures conduct the ceremonial faceoff. Hockey and gift cards were awarded, and longtime season ticket holder Dale Ayotte was randomly selected to receive $800 in gift cards and coffee for a year … It was Kitchener’s first visit to North Bay since Sept. 26, 2019, when Brad Chenier’s second goal of the game at 1:35 of overtime gave the Battalion a 3-2 win … Petrov has a 14-game points streak, the OHL’s longest this season, in which he has seven goals and 11 assists for 18 points … Wakely has a seven-game points streak during which he has seven goals and six assists for 13 points … The Battalion’s Liam Arnsby saw the end of a six-game points streak in which he had two goals and seven assists for nine points … Each team went 0-for-4 on the power play … The Battalion was without Tnias Mathurin, Avery Winslow, Michael Podolioukh, Tyson Rismond and Ethan Procyszyn … Ty Hollett played against his former team for the first time. Hollett, a fourth-round pick in the 2019 OHL Priority Selection from the Navan Grads midgets, was traded to Kitchener on Sept. 16, 2021, for a fifth-rounder in 2025. He played six games with the Troops in 2019-20 … Costantini was acquired Oct. 13 from the Hamilton Bulldogs for two Priority Selection picks in 2025, one of them conditional … Sean Reid was the other referee.