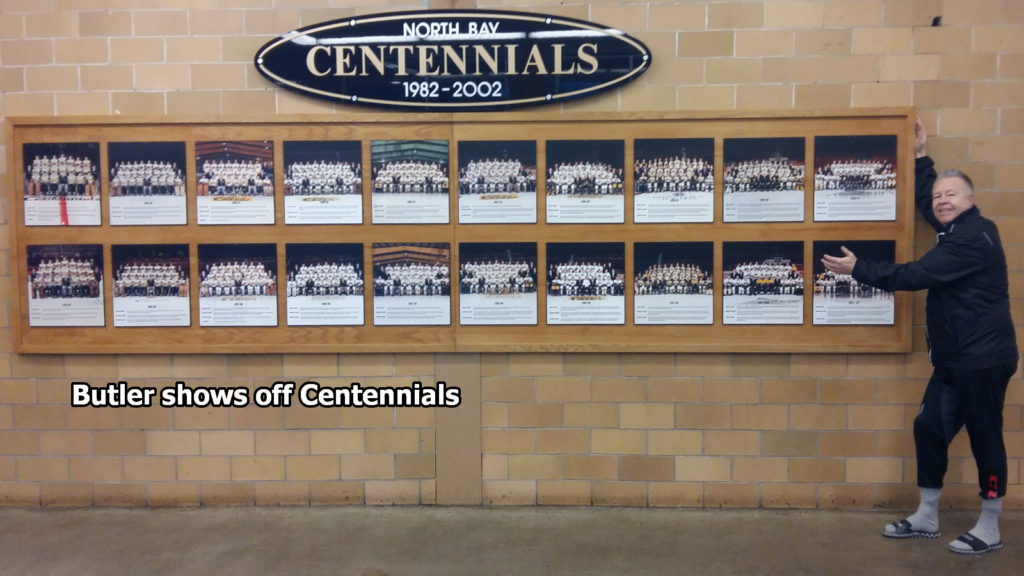 NORTH BAY, Ont. — Memorial Gardens boasts a fresh testament to its history as the hockey epicentre of the Gateway of the North.

The City of North Bay and the Ontario Hockey League’s North Bay Battalion have collaborated to present a renewed Centennials Wall in the northern end of the arena’s Chippewa Street concourse.

It displays team photographs from the first Centennials squad in 1982-83 to the last in 2001-02, after which the franchise was sold and relocated to become the Saginaw Spirit.

“It’s something I thought was important to keep the memory of the Centennials alive and to keep in front of the people as we play OHL hockey here in North Bay,” Battalion coach Stan Butler said of the exhibit.

Fans got their first real chance to see the renewed array, boasting revitalized photos, before the Battalion’s 3-2 overtime victory Sunday night over the Erie Otters who, even after the loss to the Troops, boast the best record in the OHL.

Photographs of Centennials teams adorned the concourse walls before arena renovations and the relocation of the Battalion from Brampton in 2013.

“We’ve always acknowledged and respected the history of the Centennials as representatives of North Bay,” said Battalion owner Scott Abbott. “They’re a proud part of the city’s and region’s hockey history that deserves to be maintained.

“We honour that in the game every season when we wear Centennials uniforms and host graduates of the club’s proud tradition.”

Said Melinda Fry, city manager of sports and events: “After the investment we’ve made in the facility, we wanted to ensure that we also honoured the history of the building.

“One of the initiatives we undertook was to revitalize 20 years of team pictures from the North Bay Centennials, who called Memorial Gardens home from 1982 to 2002.  We also enhanced the wall in the concourse to celebrate local achievements.  It’s our plan to include other historical items for display within the arena in the future.”

It’s expected that photographs of both Centennials and Battalion players who have advanced to the National Hockey League will be displayed.