In light of the coronavirus pandemic, the Ontario Hockey League has cancelled the rest of the 2019-20 regular season, while still holding out the possibility of conducting some form of playoffs. In all, 56 league games were abandoned.

The Battalion played 62 of 68 scheduled games, posting a won-lost-extended record of 17-41-4 for 38 points, last in the Central Division, Eastern Conference and league, and will exercise the first choice in the OHL Priority Selection, to be conducted via the Internet on April 4.

“In the interest of the safety of our players, officials, staff, fans and the general public, it’s been agreed that the cancellation of the remainder of the 2019-20 regular season is the proper course of action to take at this time,” OHL commissioner David Branch said in a statement Wednesday.

“We are continuing to monitor ongoing public health developments regarding COVID-19. When it is safe and we may resume play, we will advise on the status of the 2020 OHL Playoffs. We thank OHL players and their families, fans and partners for their continued patience and understanding throughout this challenging situation.”

Battalion owner Scott Abbott said he was disappointed that the season had come to a premature end after the team staged a second-half run at a playoff berth. The Troops, 5-23-0 on Dec. 10 when Ryan Oulahen was named interim coach, were 12-18-4 after that date.

“It’s unfortunate that we won’t get to see how far this team could have gone, but we understand the need for the health of all to rank first in our considerations and we support all actions in that respect,” said Abbott.

“Our focus now will turn to the OHL Priority Selection and the acquisition of new talent to the roster for the future.”

For the purpose of the order of picks, teams’ records will stand as through 61 games apiece, with the four teams outside playoff positions, namely ninth and 10th in each of the two conferences, holding the top four selections and the rest following in inverse order. After North Bay, the next three picks belong to the Niagara IceDogs, Sarnia Sting and Sault Ste. Marie Greyhounds.

Three ties were broken in accordance with the first tie-breaking procedure, which is more regulation and overtime wins, excluding wins via shootout. Included was the Kingston Frontenacs finishing eighth in the Eastern Conference ahead of Niagara. In normal circumstances, a tie for a postseason berth is broken in a tiebreaker playoff game.

The Battalion lost what proved to be its final game 8-0 on March 8 to the visiting Ottawa 67’s, who finished first overall.

The Western Hockey League also announced the cancellation of the rest of its regular season Wednesday, an action the Quebec Major Junior Hockey League took Tuesday.

The OHL announced last Thursday that play was suspended, and players returned to their respective communities for what was termed an Easter break.

The Battalion said it will offer its subscribers either a four-game credit on 2020-21 season tickets or a refund. 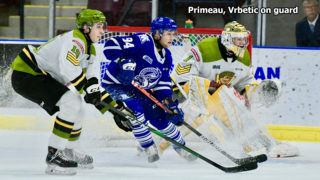