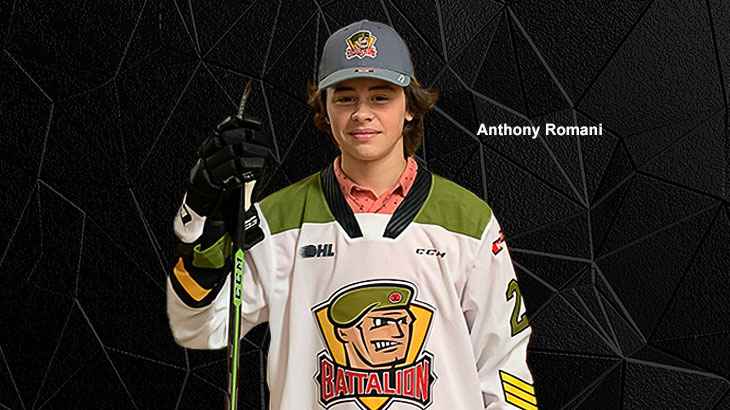 Romani, a right shot from Pickering, Ont., who stands five-foot-10 and weighs 160 pounds, scored 28 goals and earned 13 assists for 41 points in 32 games with the Toronto Jr. Canadiens U16 in 2019-20 before the coronavirus pandemic upended hockey.

“I’m ready to come in and do whatever I can to help the team win,” said Romani, who a paid a recent visit to the Gateway of the North.

“The city of North Bay was amazing, and I can’t wait to play in front of the fans. I’m very excited to be a part of the Troops and can’t wait to see what the future holds for us.”

Romani noted he considers himself to be “a hard-working player who will do whatever it takes for the team to win.”

“I’m offensive-minded, and my strength’s going to be in the offensive zone.”

General manager Adam Dennis said the Battalion had eyes on Romani for some time.

“Anthony is a player whom we coveted very early on this season. He’s been one of the leading scorers at his age group his entire life, and we don’t see that stopping now. Anthony is committed to developing his skills and getting stronger to make an impact with our club sooner rather than later.”

With two cohorts of rookies arriving at training camp, scheduled to open Sept. 4, Dennis said, the battle for roster spots will be intense.

“It’s more guys. It’s more competition. I think that’s what we strive for as a management team: to create a competitive environment.

“Ultimately, it’s for the players to rise to the top. That’s why they work hard in the summer.”