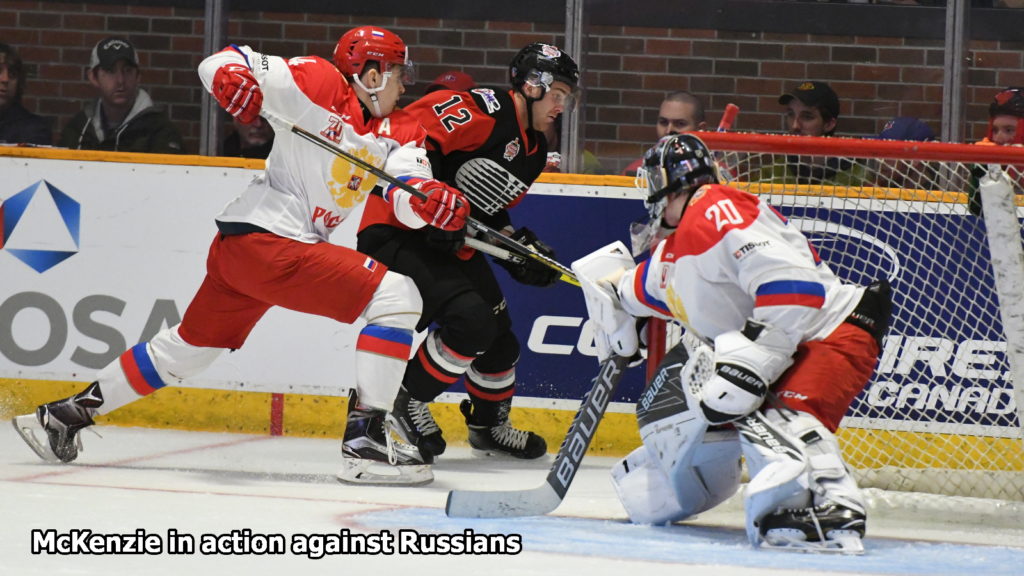 NORTH BAY, Ont. — Kirill Urakov scored at 14:34 of the third period to lift the Russian national junior team to a 4-3 victory Thursday night over the Ontario Hockey League in the third game of the CIBC Canada Russia Series.

The regulation-time win gave Russia three points and a 5-4 points lead going into Game 4 of the six-game series, at Hamilton on Monday night. The series, which features two games involving each of the Western Hockey League, OHL and Quebec Major Junior Hockey League, is part of the selection process for the Canadian team that will play in the World Junior Championship starting Dec. 26 at Toronto.

German Rubtsov, a National Hockey League Draft pick of the Philadelphia Flyers, scored two goals for Russia and Dmitry Sokolov provided the other, while goaltender Vladislav Sukhachev was steady, turning aside 29 shots before a sellout crowd of 4,221.

The OHL, which got goals from Michael McLeod, Andrew Mascherin and Anthony Cirelli, who tied it 3-3 in the third period, outshot Russia 32-25 but saw the visitors hang on for the win. Brett McKenzie was the lone North Bay Battalion player in the OHL lineup.

“The first five or 10 minutes of the first period were pretty good, and probably the last 10 minutes of the third period we stepped it up,” said Team OHL head coach Kris Knoblauch of the Erie Otters. “In between those times, we were slow to get to pucks, didn’t support it too well, and those little things are very important. I don’t think we had it on our sticks enough tonight.”

“They were really aggressive, more so than I thought they were against the WHL,” said Knoblauch. “We got in a little bit of trouble with miscommunication tonight. I think, with a little better puck management and better passes on Monday, we should be able to escape their pressure.”

Team OHL applied early pressure of its own, registering the first three shots, but Russia scored first, on an odd bounce at 5:25 of the opening period. Rubtsov took a low shot from the high slot that glanced off a defender’s skate and beat OHL goaltender Evan Cormier of the Saginaw Spirit.

Team OHL responded on the power play as Jordan Kyrou of the Sarnia Sting dished the puck to Owen Tippett of the Mississauga Steelheads, who quickly found Mississauga teammate McLeod in the slot to chip the puck over Sukhachev’s shoulder at 6:22.

With the Russians picking up the pace in the second half of the period, Rubtsov was left alone in the slot to take a feed from Pavel Karnaukhov before waiting out a sprawling Cormier to score at 15:54.

Team OHL came out of the gate firing in the second frame as Sukhachev was forced to make three big saves, denying Mascherin of the Kitchener Rangers, Gabriel Vilardi of the Windsor Spitfires and Kyrou.

Cormier was solid in the latter half of the period, denying Artur Tyanulin on the doorstep. Nikita Li was foiled twice in the final three minutes.

Russia grabbed a 3-1 lead at 6:02 of the third period as Sokolov scored off a strong play behind the goal line by Kirill Belyaev, who won a puck battle before dishing the disc to the slot.

Mascherin brought the crowd to its feet with a power-play goal at 7:48, converting the rebound off the end boards of a wrister by Tippett, and Cirelli of the Oshawa Generals buried the rebound of a low blast by the Sudbury Wolves’ Kyle Capobianco to tie it at 14:10.

Urakov struck for the winner 24 seconds later, as Danila Kvartalnov and Urakov teamed for rapid-fire chances in the goalmouth, with the latter burying a rebound.

The fourth game, at FirstOntario Centre, is to be televised live on Sportsnet and TVA Sports at 7 p.m. Monday.