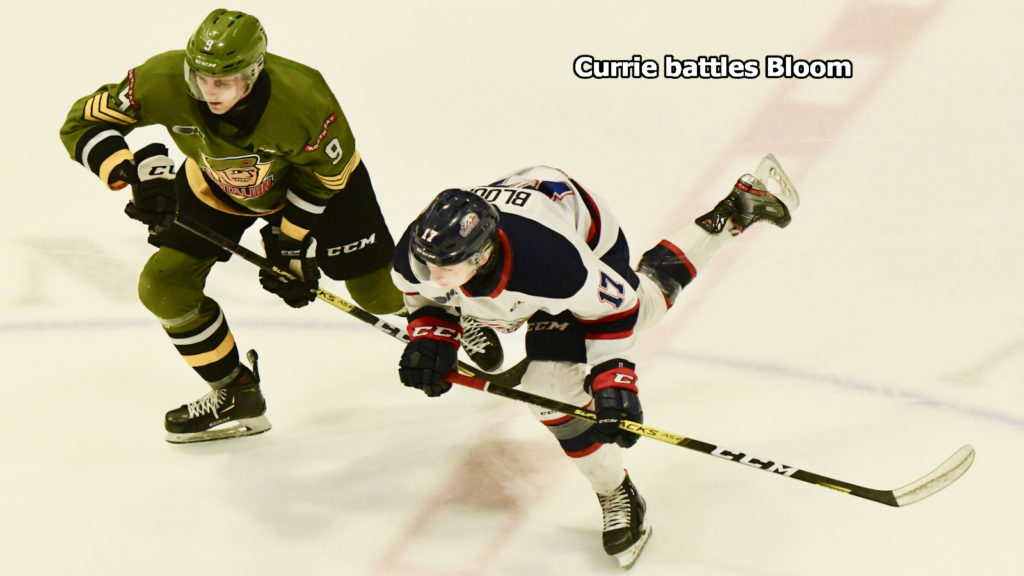 D.J. Busdeker produced one goal and three assists, Blade Jenkins and Cole Perfetti each had one goal and one assist and Josh Bloom also scored for Saginaw, which improved its won-lost-extended record to 36-16-5 for 77 points, vaulting past the idle Flint Firebirds into first place in the Ontario Hockey League’s West Division. Goaltender Tristan Lennox made 24 saves.

“We really struggled with our defensive zone early in the game,” said Battalion interim coach Ryan Oulahen. “They’re a unique team the way they structure things. They have a lot of motion. We got caught in our end a little bit. They’re an elite team; they have some elite guys. They made some high-end plays. We were down 6-0, but we didn’t quit. We played physically, and for the most part our compete and effort was pretty good. I’m happy with that.”

Saginaw, the onetime North Bay Centennials franchise before moving to Michigan in 2002, scored on the first shot as Busdeker beat Lamour, who appeared to be screened, low to the glove side from the top of the left-wing circle at 2:10 of the opening period.

Jenkins struck at 5:00, converting Busdeker’s cross-ice pass at the left post, and Perfetti, for his 35th goal of the season, ripped the rubber high over Lamour’s blocker from the slot at 6:43, giving the visitors three goals in a span of 4:33.

The Battalion outshot Saginaw 11-8, testing Lennox a number of times over the second half of the frame. Kyle Jackson had the best opportunity, alone in front in the 11th minute, while Avery Winslow, Simon Rose and Pacey Schlueting also had good chances.

Sustained pressure led to Saginaw’s fourth goal, as Giroux parked himself at the left post and tapped in a pass from Busdeker at 4:11 of the second period. Giroux scored again at 12:59, sliding home a Jenkins feed for a team-leading 39th goal. Bloom connected at 17:55, beating Lamour from the deep slot.

Denault fired a Harrison Caines pass past Lennox from close range at 19:22. Rose also assisted on Denault’s fifth goal of the campaign and his third since a trade from the Peterborough Petes.

North Bay had a 10-9 edge in shots in the period, with Lennox making good stops on Caines, Bulitka, Christopoulos and Liam Arnsby.

The Battalion capitalized on a two-man advantage scheduled for a full two minutes when Bulitka stuffed the puck past a fallen Lennox at the right post at 7:04 of the final frame. Winslow and Brandon Coe assisted on Bulitka’s 22nd goal, his sixth since joining the Troops from the Sudbury Wolves.

Christopoulos drove to the net and buried a Jackson pass at 18:31. It was rookie Christopoulos’s ninth goal.

North Bay outshot Saginaw 6-4 in the period. Lennox made a good stop against Winslow from the right wing in the seventh minute and scrambled to foil Denault in the 11th. Caines missed the net on a close-in chance in the 14th minute.

The Battalion plays host to Sudbury at 7 p.m. Wednesday on Subway Night.

BATTALION BULLETS: It was I Stop, You Stop School Bus Safety Day, marking 20 years since five-year-old Adam Ranger was killed Feb. 11, 2000, when struck by a transport truck that failed to stop in Mattawa. Representatives from law enforcement, school bus companies and the Nipissing-Parry Sound Student Transportation Service were in attendance, and fans visited a table in the concourse for a chance to win a Battalion replica game sweater. In addition, there were 300 rally towels for children … The teams completed their season series, after Saginaw won 9-1 at home Oct. 18 … Luke Moncada saw the end of a 10-game points streak, longest by the Troops this season, in which he had eight goals and eight assists for 16 points … The Battalion went 1-for-4 on the power play. Saginaw was 0-for-2 … The Battalion, which dressed 11 forwards and seven defencemen, was without Ty Hollett, Mason Primeau, Braden Henderson and Mitchell Russell, who left a 6-2 home-ice win Thursday night over the Ottawa 67’s after a check from behind by Merrick Rippon. Rippon, who drew a major for that infraction, a fighting major and two game misconducts, has been suspended indefinitely … Paul Christopoulos returned to the Battalion blue line from a two-game suspension after taking a slew-footing match penalty in a 4-0 road win Feb. 15 over the Barrie Colts … Also back was Winslow, who lost seven games to injury.