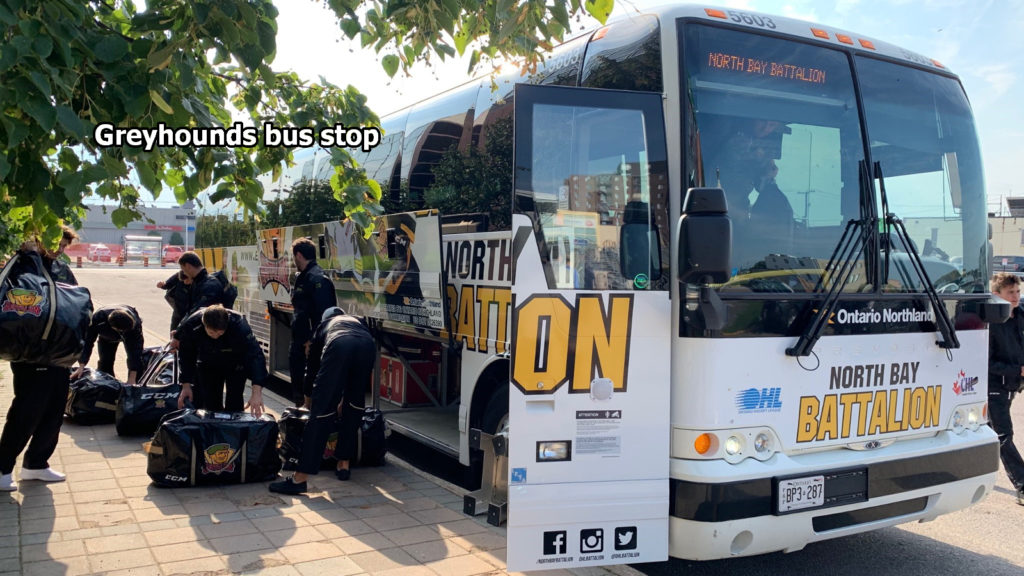 SAULT STE. MARIE, Ont. — Jaromir Pytlik was credited with the last two goals, the second into an empty net, and an assist to pace the Sault Ste. Marie Greyhounds to a 6-4 victory over the North Bay Battalion in Ontario Hockey League action Saturday night.

Zack Trott and Ryan Roth each had one goal and two assists, and Rory Kerins and Cole MacKay provided a goal apiece for the winners, who got 20 saves from goaltender Christian Propp, whom the Battalion traded to the Greyhounds on June 12.

The Battalion dropped its season opener 3-0 Friday night to the visiting Barrie Colts, while the Greyhounds played their second home game in two nights after opening the campaign with a 6-3 win over the Flint Firebirds in which Propp made 28 saves.

“We made some young mistakes tonight, and they cost us,” said assistant coach Adam Dennis of the Battalion. “They’re things we can correct and get a better result in the future.”

Pytlik got the winner at 11:45 of the third period, darting up the middle on a quick-developing odd-man rush to beat Cicigoi with a snap shot. With Cicigoi on the bench for an extra skater, Brad Chenier slid the puck back from the neutral zone into his own vacant net at 19:08, with Pytlik accorded his second goal of the season.

North Bay rallied from a 4-2 deficit to tie it early in the frame, sparked by Christopoulos, who drove up the slot for his first OHL goal at 3:18. Fellow rookie David Campbell, who kept the puck in at the blue line, earned his first point with the lone assist, as the play survived video review.

Arnsby, the Battalion’s first-round pick in the OHL Priority Selection last April, struck at 4:52 for his first goal. Chenier shot the puck off a left-wing rush, and Arnsby went to the crease to pop the rubber over Propp. Braden Henderson had the other assist, his second.

Sault Ste. Marie, which trailed 2-1 after 20 minutes, got even at 1:09 of the second period when Kerins struck from the right dot off a feed from the end boards by Jaden Peca. It was reminiscent of the Barrie game, when the Troops surrendered first-minute goals in both the second and third periods.

Roth gave the Greyhounds the lead at 3:33 as the wide trailer on a four-on-two rush. Pytlik passed the puck to the right side for the scoring shot. With the teams skating four-on-four 1:12 later, Cicigoi left his net to play the puck and whiffed on it, handing MacKay a gift goal.

A run of penalties followed, as North Bay’s Luke Moncada drew a double minor for high-sticking at 5:03 before Trott was banished for holding at 7:14 and teammate Ryan O’Rourke for crosschecking at 16:41.

Primeau collected the Troops’ first goal of the season on the power play at 14:49 of the opening period. Henderson fired a shot through traffic that Primeau redirected at the right side of the crease. Russell had the other assist.

Trott replied with the man advantage 1:01 later, swinging to the slot from the right circle and wiring the puck past Cicigoi.

Russell connected on a two-on-one rush at 19:18, faking a pass to the left side and beating Propp between the legs with a relatively weak-looking shot.

Chenier, who just missed on the tip of a Nick King shot 12 seconds into the period, fired wide right on a shorthanded breakaway after Josh Currie went off for high-sticking at 2:38.

Cicigoi went to his left to deny Trott on a wraparound attempt in the 11th minute and had the puck trickle past the left post after Drew Wawrow blasted it through traffic from high on the right wing seconds later. Peca slid to break up a play by Arnsby on an odd-man rush in the 13th minute.

The Battalion plays host to the Kitchener Rangers at 7 p.m. Thursday.

BATTALION BULLETS: Dennis and fellow assistant Scott Wray ran the Battalion bench as head coach Stan Butler, who worked the Barrie game, skipped the trip … With Propp playing as an overager, the conditional 15th-round OHL Priority Selection pick in 2022 that the Battalion acquired for him becomes a third-rounder in 2023. The selection originally belonged to the Erie Otters. Propp played one and a half seasons with North Bay after a trade from the Owen Sound Attack. He went 24-24-2 with a 3.98 goals-against average, an .893 save percentage and two shutouts last season … Opening lines included Arnsby centring left winger Chenier and right winger Brandon Coe, Primeau centring left winger Kyle Jackson and right winger Russell and Moncada pivoting Cameron Peters on left wing and Harrison Caines on right wing. Currie centred left winger Campbell and right winger Christopoulos … Apart from Cicigoi, who was backed up by Joe Vrbetic, Campbell made his OHL debut … North Bay was without Ryan Thompson, Niki Korpialho, Patrick Brown and Matthew Struthers … Each team went 1-for-5 on the power play … Among the missing for the Greyhounds were Joe Carroll and Barrett Hayton, the latter of whom still was at the training camp of the National Hockey League’s Arizona Coyotes … The referees were Jason Goldenberg and Anthony Tapper.