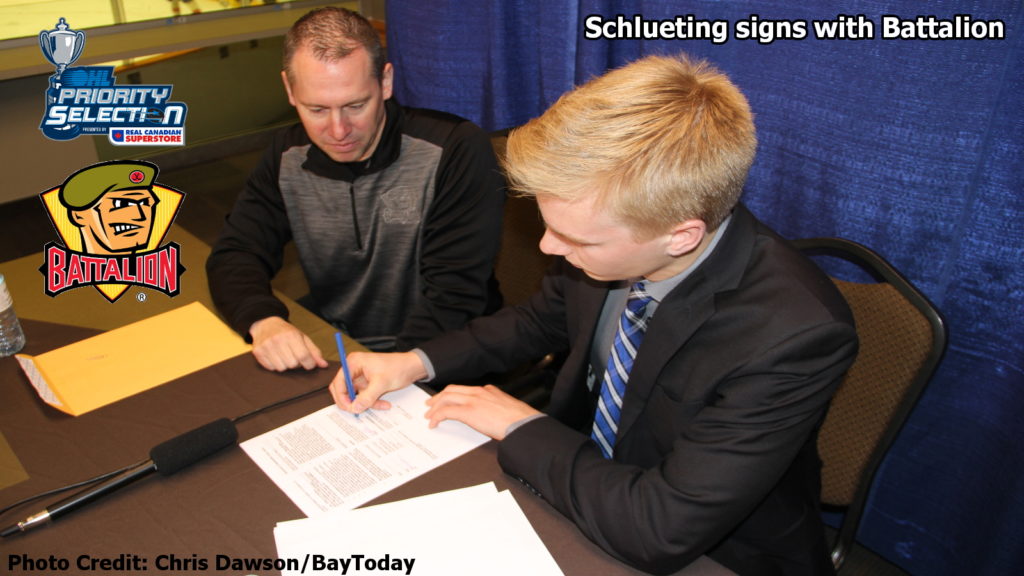 “This has been an incredible moment,” said Schlueting.

“I’ve waited so long for this. I’ve waited all year, and I’m just really excited to get started and I can’t wait to go to camp next week. That’s going to be great to meet everyone and see all the guys. It’s one of the most thrilling days of my life.”

Schlueting, a left shot who turned 16 on Jan. 2, scored 13 goals and added 21 assists for 34 points in 24 games and had four points, including two goals, in four games with Team Northern Ontario Hockey Association at the OHL Cup at Toronto in March. He had one assist in four games at the OHL Gold Cup at Kitchener in early May as Team NOHA posted a won-lost-tied record of 2-2-0, marking the first time in the six-year history of the event that it won a game.

Matt Rabideau, an assistant general manager with the Battalion who served as general manager of Team NOHA, pointed to Schlueting’s “commitment to winning and the things he does away from the rink” as among the keys to his success.

Calling Schlueting “an effortless skater,” Rabideau said: “He’s a big body. He can outmuscle opponents. He can join the rush. He’s creative in the offensive zone. He’s good in the defensive zone. He played a lot of minutes. He was our captain for Team NOHA.

“Pacey’s played in a lot of high-calibre games, whether it be the OHL Cup, whether it be tournament play, big games. I think they won the Waterloo Gold Puck this year with the minor midget Trappers. (At) the OHL Gold Cup and being on that stage with a lot of those other elite players, Pacey showed that he definitely belongs there.”

With the Battalion set to hold its orientation camp May 26-27, Schlueting said he’s not concerned about being a target because of his first-rounder status.

“I’m just going to go out there and do my thing and do my best and give my full effort.”

But playing in his home town figures to provide benefits.

“I won’t have to worry that much about moving into a new home and billeting and all that. I can just focus on my hockey and my training, and I think that’s going to help me in the long run. And it’s going to be nice to introduce new teammates to North Bay.”

Schlueting is the first 2018 OHL Priority Selection pick to sign with the Battalion.