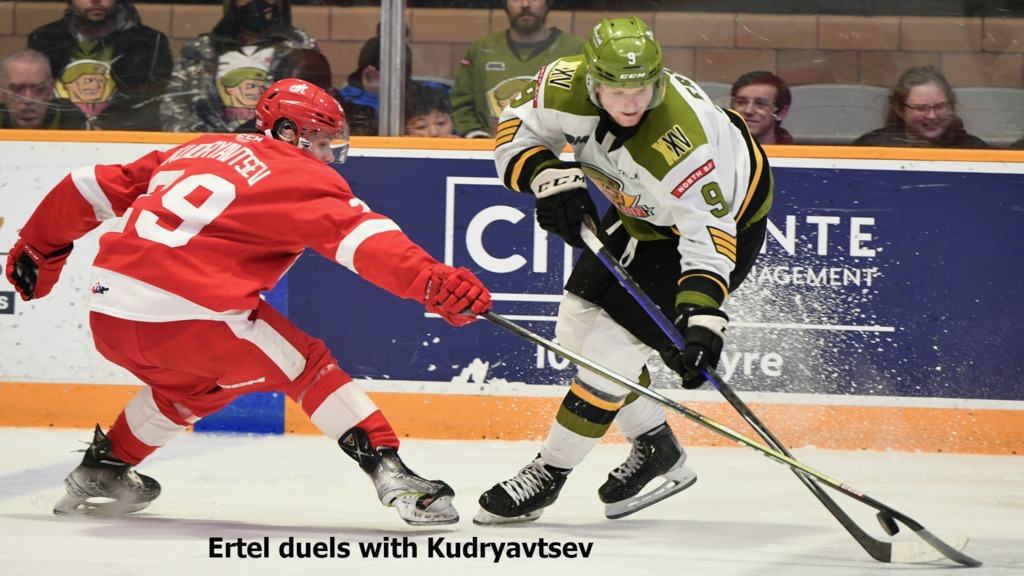 NORTH BAY, Ont. — Bryce McConnell-Barker and Mark Duarte scored in a four-round shootout to give the Soo Greyhounds a 4-3 Ontario Hockey League victory Thursday night over the North Bay Battalion.

Kalvyn Watson had one goal and one assist and McConnell-Barker and Duarte provided a goal apiece for Soo, which posted a season-high third straight win to move its won-lost-extended record to 9-10-8 for 26 points, fifth and last in the West Division. Goaltender Samuel Ivanov made 35 saves through overtime.

Anthony Romani, with the Teddy Bear Toss goal 12 seconds into the game, Justin Ertel and Matvey Petrov scored for North Bay, which got its only shootout goal from Kyle Jackson. Goaltender Charlie Robertson contributed 32 saves through overtime before a crowd of 2,454.

The Battalion, which saw a three-game winning streak ended, is 18-8-1 for 37 points, first in the Central Division.

Luc Brzustowski made his debut on the Battalion blue line after being acquired from Soo in a trade Wednesday for two fourth-round OHL Priority Selection picks.

In the shootout, in which the Battalion went first, Petrov was foiled before Jackson scored and Josh Bloom and Ty Nelson were denied. McConnell-Barker connected for Soo, Kirill Kudryavtsev and Watson failed to score and Duarte struck with the deciding shot.

With Robertson gone for a sixth skater, Petrov precipitated overtime when he hammered the puck past Ivanov from the top of the left circle at 18:23 of the third period on assists by Nelson and Jackson. Petrov’s 11th goal of the season led to the extra frame, in which the Greyhounds outshot the Troops 6-3 and Bloom and Nelson couldn’t score on a two-man breakaway.

Soo rallied from a 2-0 deficit, sparked by McConnell-Barker’s team-leading 16th goal at 18:58 of the second period. Paul Christopoulos failed to corral the puck, and Watson had the lone assist.

Watson tied it on the power play 55 seconds into the third period, beating Robertson to the stick side from between the hash marks on assists by Kudryavtsev and Tyler Savard. Watson has six goals in the last three games.

Duarte gave the visitors a 3-2 lead at 7:56, putting the puck under Robertson off a backhander while driving to the goalmouth. Justin Cloutier and Savard assisted.

Romani took a pass from the left-wing corner from Liam Arnsby and, stationed in the left circle, beat Ivanov over his glove to the far side before all the fans were seated. Alexander Lukin had the other assist on Romani’s seventh goal, which brought the Teddy Bears out of the stands. The cleanup of 897 bears took six minutes.

The franchise record for the fastest goal from the start of a game is nine seconds, by Lukas Havel in a 5-3 win Nov. 21, 1999, over the London Knights at Brampton, the Troops’ home for their first 15 seasons until 2013.

Ertel completed a three-way rush with Bloom and Jackson, who drew assists, at 5:15 of the second period, converting from the right side for a ninth goal on the season.

The Battalion visits the Mississauga Steelheads, second in the division, at 7 p.m. Friday. The game can be seen live in North Bay on YourTV Channels 12 and 700.

BATTALION BULLETS: The Brick North Bay Teddy Bear Toss game, supported by Moose FM Radio and Country 90.5, saw fans bring plush toys or buy Brickley The Teddy Bear toys at the arena for $20, with proceeds going to the Children’s Miracle Network. In addition, a donation of $10 per bear was made to the North Bay Santa Fund, and an autographed Battalion stick was auctioned … The Troops will assist One Kids Place North Bay in making and serving breakfast at 400 McKeown Avenue at 9:30 a.m. Saturday. Tickets at $2.50 can be purchased there. Battalion players will be available for photos and autographs … The teams met for the third of four games after splitting two dates at Sault Ste. Marie to open the season. The Battalion won 4-1 on Sept. 30 before the hosts prevailed 6-4 on Oct. 1. The final game is scheduled Jan. 12 at North Bay … Jackson has a seven-game points streak during which he has six goals and as many assists for 12 points … Bloom has a five-game points streak in which he has five goals and four assists for nine points. He has scored six goals and earned eight assists for 14 points in 10 games since a Nov. 16 trade from the Saginaw Spirit … The Battalion went 0-for-2 on the power play. The Greyhounds were 1-for-5 … The Battalion, which dressed 11 forwards and seven defencemen, scratched Tnias Mathurin, Jacob Therrien, Avery Winslow, Kyle McDonald and Brett Bouchard.