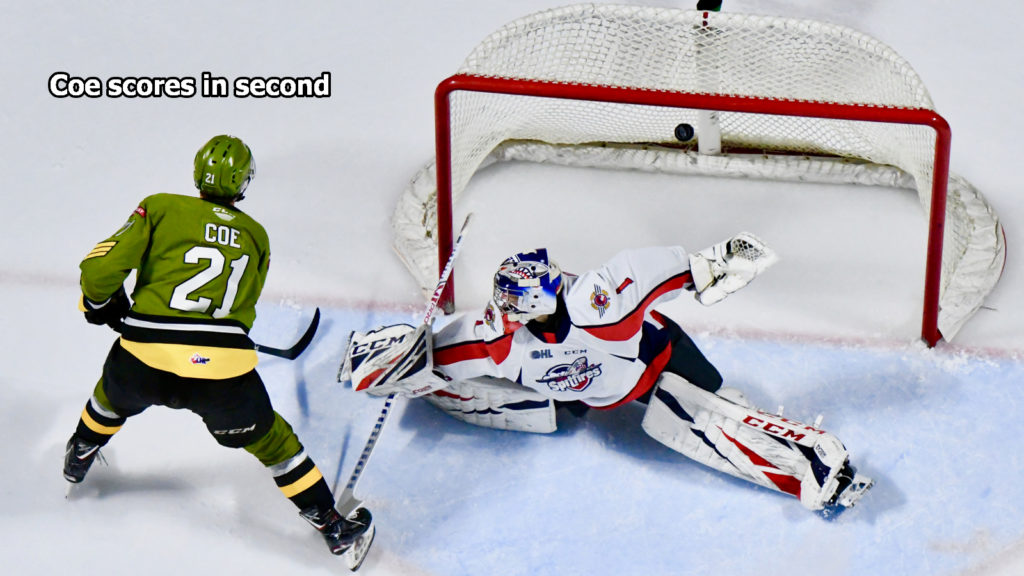 WINDSOR, Ont. — Will Cuylle’s second goal of the game, at 16:03 of the third period, was the winner as the Windsor Spitfires rallied with five straight goals to defeat the North Bay Battalion 6-4 in an Ontario Hockey League game Saturday night.

Curtis Douglas scored two goals, Jean-Luc Foudy had an empty-netter and two assists and Cole Purboo provided the other goal as Windsor erased a 4-1 third-period deficit to win a seventh straight game and move its won-lost-extended record to 11-3-1 for 23 points, second in the West Division.

Starting goaltender Xavier Medina allowed three goals on seven shots before being replaced by Kari Piiroinen, who gave up one goal on 11 shots before an announced crowd of 4,220 at the WFCU Centre. The Spitfires, who hadn’t played since a 10-2 road romp Nov. 2 over the Sault Ste. Marie Greyhounds, are 8-0-1 at home.

Brad Chenier had two goals and one assist and Luke Moncada and Brandon Coe each contributed one goal and one assist as North Bay lost a ninth consecutive game. Goaltender Christian Cicigoi made 35 saves for the Battalion, 3-15-0 for six points, fifth in the Central Division.

The Troops, who played the middle game of a three-game weekend road trip after a 4-3 setback Friday night to the London Knights, saw Coe return to action from a two-game suspension for a purported slew-foot against Liam Ross of the visiting Sudbury Wolves in a 3-2 loss Nov. 1.

Windsor’s comeback started at 2:50 of the final period when Douglas beat Cicigoi low to the stick side from the left circle. Cuylle pulled the Spitfires within a goal at 8:12, firing a wrister from the slot past Cicigoi’s blocker, and Douglas tied it 4-4 on the power play at 10:46 as he converted a Foudy pass to the lip of the crease.

Before Cuylle struck for the winning goal on a close-range backhander, the Troops, outshot 23-4 in the period, had two good chances to regain the lead in the 13th minute, but Piiroinen denied Chenier off the left wing and turned away Harrison Caines near the right post. Foudy finished the scoring into an empty net at 18:45.

The Battalion, which trailed 1-0 through 20 minutes, erupted for four goals in a span of 8:51 in the second period, sparked by penalty killer Moncada. He took a pass from Chenier and broke in alone on Medina to beat him with a backhander under the crossbar at 7:06. Moncada has nine goals this season, including a league-leading four shorthanded scores.

Chenier, who rushed to the net to convert a feed from Coe at 9:42, chased Medina from the game at 12:09, intercepting a Thomas Stevenson clearing attempt at the Windsor blue line and ripping the puck high over the goaltender’s glove from the left-wing circle. The goal was Chenier’s seventh.

Coe made it 4-1 at 15:56, finishing a three-on-one rush by beating Piiroinen with a backhand deke. Moncada and Simon Rose assisted on Coe’s fourth goal.

Purboo opened the scoring at 8:11 of the first period, cruising across the goalmouth and redirecting Grayson Ladd’s shot from the right circle.

The Troops, outshot 10-3 in the period, had two good chances during the only power play, when Chenier and Moncada drilled pucks off the post. The three shots set a season low for the Troops in a period this season.

The Battalion visits the Sarnia Sting at 4:05 p.m. Sunday. The game can be seen live in North Bay on YourTV Channels 12 and 700 and heard on Country 600 CKAT.

BATTALION BULLETS: The Battalion has split two games against Windsor in each of the last two seasons. The Troops have a winning record against the Spitfires in only two of 21 completed seasons, in 2000-01 and 2004-05, both when based in Brampton. Windsor visits North Bay on Jan. 5 … Cicigoi last saw action Oct. 19 in a 6-3 road loss to the Flint Firebirds, when he made 36 saves … The Battalion went 0-for-2 on the power play, including a meaningless man advantage with eight seconds to play. Windsor was 1-for-3 … Chenier has four goals in the last three games … Opening lines included Matthew Struthers centring Mason Primeau on left wing and right winger Mitchell Russell, Moncada centring left winger Chenier and right winger Coe and Cameron Peters pivoting left winger Kyle Jackson and Caines on right wing. Josh Currie centred left winger Niki Korpialho and right winger Alex Christopoulos … The Battalion was without Pacey Schlueting, Liam Arnsby and David Campbell … Arnsby has been with Canada White at the World Under-17 Hockey Challenge at the Western Hockey League centres of Medicine Hat and Swift Current. The Czech Republic defeated his Canada White team 3-2 in overtime Saturday at Medicine Hat in the bronze-medal game … Foudy has an eight-game points streak in which he has five goals and eight assists for 13 points … The referees were Drew Jackson and Anthony Tapper.