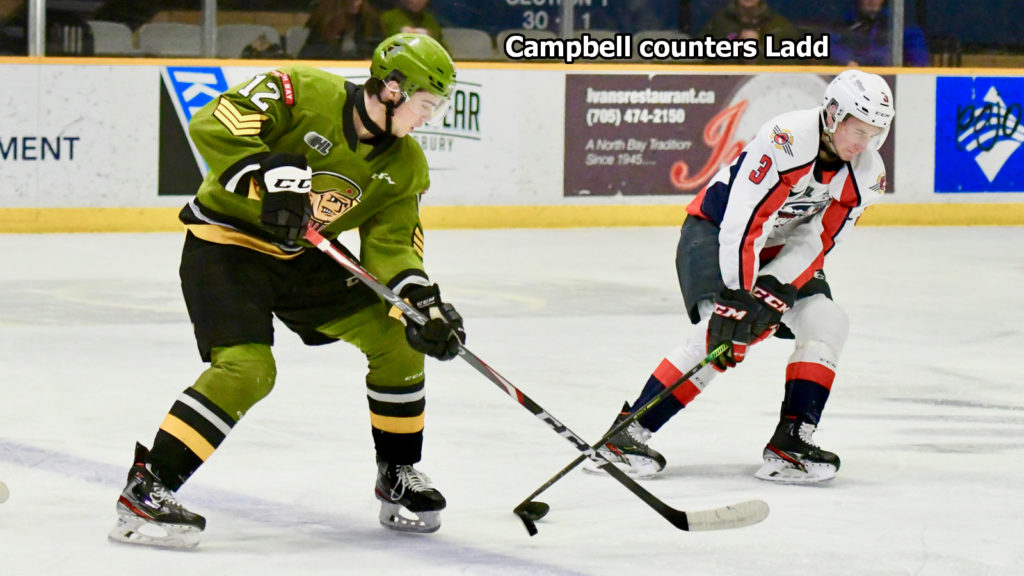 Luke Boka and Grayson Ladd each had a goal, and goaltender Xavier Medina, playing an 11th consecutive game, made 15 saves for Windsor, which boasts a won-lost-extended record of 24-8-4 for 52 points atop the West Division and Western Conference. The Spitfires, who played a third game in three days on a Northern Ontario swing, haven’t lost since a 4-1 road setback Dec. 28 to the Saginaw Spirit.

Luke Moncada and Mitchell Russell, on a penalty shot, scored for North Bay, 9-27-2 for 20 points, fifth and last in the Central Division. Goaltender Cameron Lamour faced 46 shots before a Memorial Gardens crowd of 2,099.

The Battalion was without Brad Chenier, suspended for the game with a review pending after he received a major and misconduct for checking from behind in a 6-1 road loss Saturday night to the Barrie Colts. With Cameron Peters also sidelined after a sucker punch from Barrie’s Christopher Cameron, the Troops dressed 11 forwards and seven defencemen.

“We really struggled today,” said interim coach Ryan Oulahen. “We were slow pretty much from start to finish, and Lamour played really well and found a way to get a big point for us. When we got to overtime, we outchanced them two to one but they scored on their chance. It could have been a lot worse. We stole a big point today.”

After the teams battled to a 1-1 tie through 40 minutes, defenceman Ladd struck at 4:15 of the third period, blasting a pass from Egor Afanasyev over Lamour’s blocker from the top of the left-wing circle.

The Battalion’s Kyle Jackson was off for slashing when Russell broke in alone on Medina and was slashed by Afanasyev before getting off a shot. Russell, awarded a penalty shot by referee Josh Schein, tied it 2-2 at 16:03, ripping a wrister under Medina’s glove for a 15th goal on the season and his first shorthanded tally.

It was the first home-ice penalty shot goal by the Battalion since Dec. 9, 2012, when Barclay Goodrow beat Oscar Dansk of the Erie Otters at Brampton. The Troops’ most recent successful penalty shot came at Barrie on Jan. 16, 2016, when Daniil Vertiy scored against David Ovsjannikov.

The teams traded chances through the rest of the period. Lamour foiled Daniel D’Amico in the 17th minute, while Medina turned aside Liam Arnsby in the final seconds.

Foudy netted the winner seconds after Medina denied Jackson in close. Foudy and D’Amico broke in alone on Lamour, with Foudy sweeping a D’Amico pass over the glove of the sprawling goaltender.

Boka ripped a Will Cuylle feed over Lamour’s glove from deep in the left circle at 10:46 of the first period before Moncada responded at 17:16. Moncada, seizing a Foudy turnover at the Windsor blue line, beat Medina, who was screened by defender Ruben Rafkin, from the slot. It was Moncada’s team-leading 20th goal.

It was a busy period for Lamour, who faced 17 shots while the Troops directed five at Medina. Lamour turned away good chances for Cuylle, Afanasyev, Pasquale Zito, Connor Corcoran and Chris Playfair. Moncada had a good opportunity in close in the 11th minute.

The Battalion plays host to the Mississauga Steelheads at 7 p.m. Thursday on Canada Life Night.

BATTALION BULLETS: The teams completed their season series, after Windsor won 6-4 at home Nov. 9 … The Battalion’s 17 shots matched a season low set Nov. 8 in a 4-3 road loss to the London Knights, while the two second-period shots set a season low, which previously was three in the first period at Windsor … Russell has a five-game points streak in which he has five goals and two assists for seven points. The five goals have come in his last four games … The Battalion went 0-for-1 on the power play. Windsor was 0-for-6 … Left winger David Campbell was recalled from the Blind River Beavers of the Northern Ontario Junior Hockey League. He played a seventh game with the Battalion, his first since Nov. 10. A fourth-round pick in the 2018 OHL Priority Selection from the North Bay Trappers minor midgets, Campbell has 14 goals and 16 assists for 30 points in 20 games with Blind River … In addition to Chenier and Peters, the Troops scratched Christian Cicigoi … Among the missing for Windsor was goaltender Kari Piiroinen, with Finland at the World Junior Championship in the Czech Republic. Matt Tovell backed up Medina … Afanasyev has an 11-game points streak in which he has nine goals and as many assists for 18 points … Foudy had four points, including two goals, in two games against the Troops … Andrew Willmetts was the other referee.