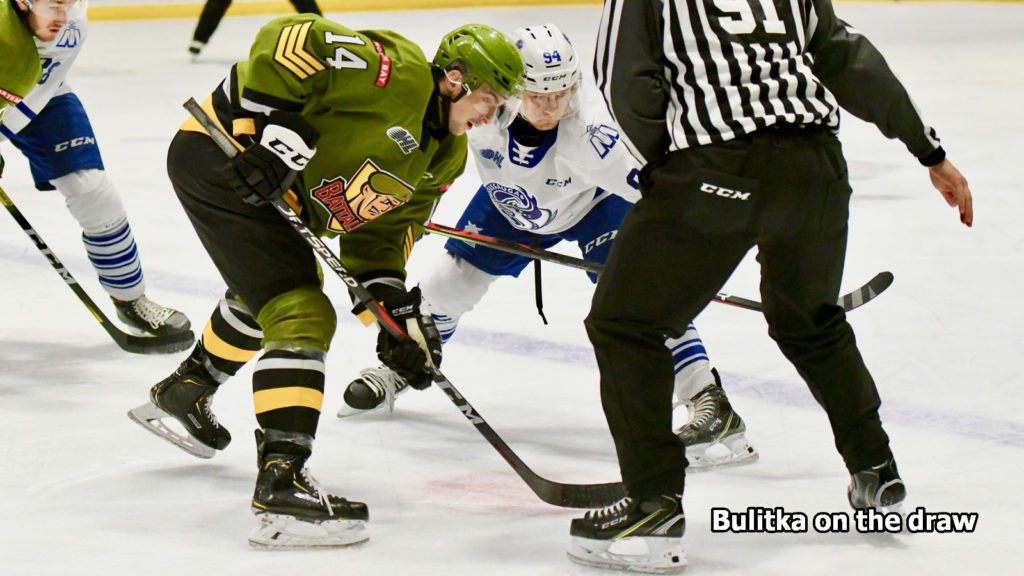 James Hardie scored two goals and added one assist, Nicholas Canade contributed one goal and two assists, Richard Whittaker had one goal and one assist and Calvin Martin and Ty Collins also scored for Mississauga, which improved its won-lost-extended record to 16-21-3 for 35 points and moved into a tie with the Barrie Colts and Niagara IceDogs for second place in the Central Division.

North Bay, which lost a fourth consecutive game, is 9-28-2 for 20 points, fifth and last in the division. Goaltender Joe Vrbetic faced 40 shots before a crowd of 1,782.

Luke Moncada made his debut as Battalion captain after Brad Chenier was traded to the Sudbury Wolves, while Czech defenceman Martin Has skated on the blue line for the first time since being the Troops’ first-round choice in the Canadian Hockey League Import Draft last June.

Shane Bulitka, acquired in the Chenier trade, suited up with the Battalion for the first time.

“We had a tough day to start when our captain gets traded,” said interim coach Ryan Oulahen. “It was an emotional day for everyone involved, and it showed. We weren’t prepared, and I take the brunt of that. We feel bad as a staff.

“We were a little bit shocked that Mississauga was coming hard, and that’s a team over there that’s ahead of us in the playoff race, and it showed they were ready to take us and we weren’t ready to take them.”

Canade, lurking in the slot, opened the scoring at 14:10 of the first period when the Battalion’s Mason Primeau sent a backhanded pass to the front of the net. Martin made it 2-0 at 15:54, finishing a two-on-one rush with Aidan Prueter with a wrister over Vrbetic’s glove.

The Battalion, outshot 11-7, had its best chances during the period’s lone power play. Edmonds denied Brandon Coe on a rush to the net in the sixth minute and stopped an Alex Christopoulos drive and Chad Denault’s close-range attempt at the rebound in the eighth.

Mississauga added three second-period goals, including a pair 55 seconds apart. Hardie knocked a Canade rebound past Vrbetic from in close at 3:17, and Collins wired the puck over the goaltender’s glove from the right-wing circle at 4:12. Whittaker ripped home Hardie’s cross-ice pass off the right wing at 10:36.

The Troops outshot the Steelheads 15-9, their best chances coming after a six-minute delay to fix a broken pane of glass at the Mississauga bench. Edmonds denied Moncada in tight in the 14th minute, with Coe unable to convert the rebound. Edmonds foiled Mitchell Russell at the goalmouth with the Battalion on the power play late in the frame and kicked away a drive off the right wing by Kyle Jackson in the final seconds.

Hardie scored at 12:44 of the final period, finishing off a two-man breakaway with Canade.

Vrbetic, who faced 20 shots in the frame, made several good stops, turning away Hardie, Liam Ham, Thomas Harley and Luca DelBelBelluz. North Bay’s best chance came early in the period when Edmonds turned aside Russell at the lip of the crease.

The Battalion visits Sudbury at 7:05 p.m. Friday. The game can be seen live in North Bay on YourTV Channels 12 and 700 and heard on Country 600 CKAT.

BATTALION BULLETS: Chenier was recognized at centre ice in conjunction with the ceremonial faceoff on Canada Life Night. He won’t face the Battalion at Sudbury, as he’ll serve the third game of a three-game suspension … It was the teams’ second of six games, after the Steelheads won 4-2 at home Dec. 13. The next meeting is Jan. 31 at Mississauga … The Troops were shut out for the third time this season, the second time at home … The Battalion is 7-10-2 at Memorial Gardens, while the Steelheads are 7-10-3 on the road … North Bay went 0-for-2 on the power play. Mississauga was 0-for-3 … Opening lines for the Battalion, which dressed 11 forwards and seven defencemen, featured Moncada centring Primeau on left wing and right winger Coe, Bulitka centring left winger Harrison Caines and right winger Denault and Liam Arnsby pivoting left winger Jackson and right winger Russell. Centre Cameron Peters and right winger Christopoulos had various linemates … The Battalion was without Ryan Thompson, Josh Currie and David Campbell … Edmonds made a ninth consecutive start … Canade has six points, including four goals, in the last two games … Martin has a three-game points streak in which he has two goals and one assist for three points … Mississauga was without Keean Washkurak and Cole Schwindt … The referees were Mike Cairns and Morgan MacPhee.