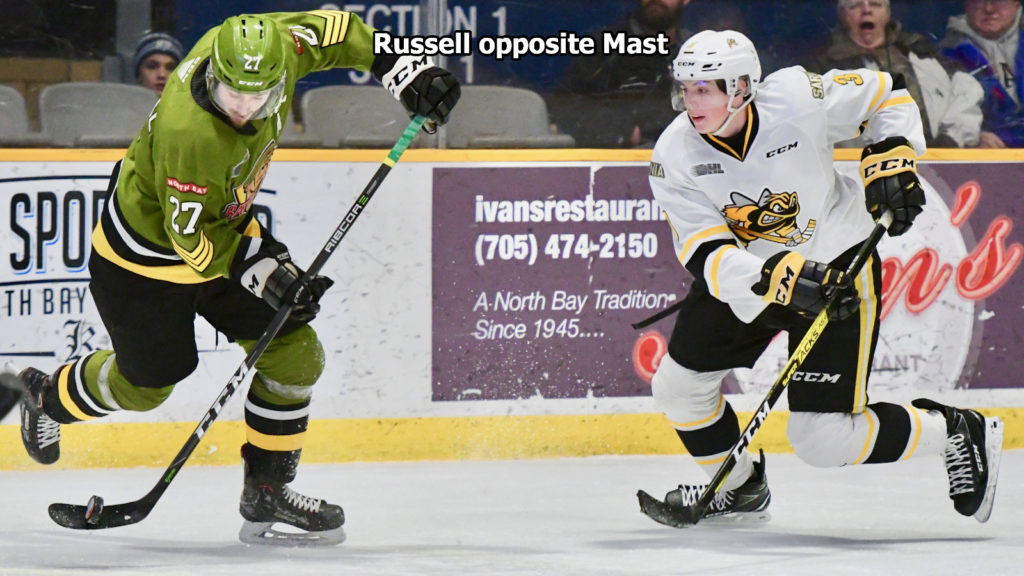 A delayed penalty was pending to Simon Rose when defenceman Kammerer, who also had an assist, swept the puck past Battalion goaltender Cameron Lamour from a scrum in front of the net.

Nolan Burke, Joseph Mack, Jacob Perreault and Ty Voit also scored for Sarnia, which got 28 saves from goaltender Benjamin Gaudreau. The Sting moved its won-lost-extended record to 18-29-6 for 42 points, fifth and last in the West Division. Sarnia, which was without leading scorer Sean Josling, currently suspended, is 2-8-2 in its last 12 games but has won two of its last three.

Mitchell Russell had one goal and two assists and Luke Moncada one goal and one assist for North Bay. Paul Christopoulos and Kyle Jackson also scored for the Battalion, 11-38-3 for 25 points, fifth and last in the Central Division. Lamour faced 21 shots before a crowd of 2,034.

“It’s our effort and our compete level that disappoints us once again,” said interim coach Ryan Oulahen of the Battalion, which last won 4-2 against the host Sudbury Wolves on Jan. 24.

“We have to get to a point where it’s for 60 minutes. We could argue the fact that for 55 or 56 minutes we were pretty good, but then you have four minutes that are the complete opposite in bad spots in the game like right in front of our net where we don’t win battles and we don’t clear the puck. We don’t sense danger. We didn’t deserve to win at all.”

Rookie Burke finished a passing play with Theo Hill and Sam Bitten to open the scoring at 9:18 of the first period.

The Battalion, which outshot Sarnia 8-6, had three good chances in the fifth minute when Gaudreau denied close-range shots from Liam Arnsby, Rose and Alex Christopoulos. Moncada tested Gaudreau with a drive off the right wing in the final seconds.

The teams combined for five second-period goals, starting when Russell connected at 5:55, ripping a Moncada feed past Gaudreau’s glove from the left-wing circle for a 19th goal on the season. Mack replied 43 seconds later after Justin Nolet raced to the net only to be denied by Lamour. Mack followed up the play and put the rebound past the goaltender.

Moncada tied it 2-2 at 9:43 when his shot off the left wing beat Gaudreau to the stick side. Russell and Pacey Schlueting assisted on Moncada’s team-leading 29th goal.

Paul Christopoulos gave the Troops their only lead when he drove to the net and converted Russell’s pass across the goalmouth at 10:53. The goal was defenceman Christopoulos’s fourth.

Perreault responded with his team-high 32nd goal at 18:26 when his long shot beat Lamour low to the stick side, and rookie Voit put Sarnia back in front 43 seconds into the third period, banging home the puck from the lip of the crease.

Jackson, with his seventh goal, made it 4-4 at 3:44 when he put Shane Bulitka’s pass off the left wing past Gaudreau from the slot.

The Battalion outshot the visitors 16-5 in the period, with Moncada, Bulitka, Brandon Coe and Rose among those testing Gaudreau.

The Battalion visits the Barrie Colts at 7:30 p.m. Saturday. The game can be seen live in North Bay on YourTV Channels 12 and 700 and heard on Country 600 CKAT.

Troops, Wolves square off
10 hours ago