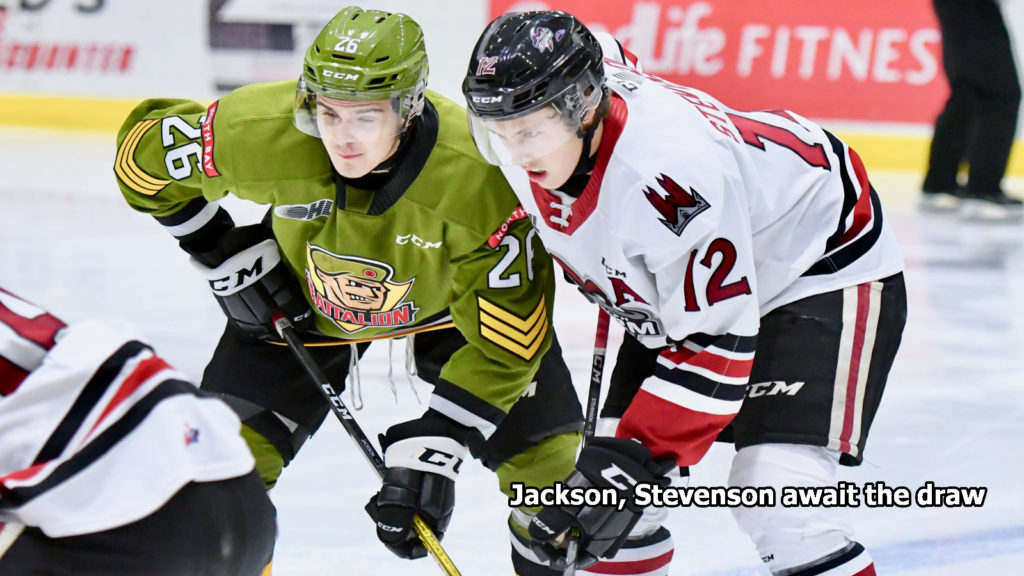 GUELPH, Ont. — Keegan Stevenson scored two goals to pace the Guelph Storm to a 9-3 victory Friday night over the North Bay Battalion, handing the Troops a fourth consecutive Ontario Hockey League loss, all on the road.

Cam Hillis contributed one goal and three assists, Cedric Ralph had one goal and two assists and Jacob Roach provided one goal and one assist, while Eric Uba, Andrei Bakanov, Michael Bianconi and Marko Sikic scored a goal apiece. Guelph goaltender Nico Daws made 31 saves before 3,536 at the Sleeman Centre.

Guelph has a won-lost-extended record of 5-4-3 for 13 points, fourth in the Midwest Division.

Kyle Jackson and Mason Primeau each scored one goal and added an assist, and Luke Moncada also scored for North Bay, 3-10-0 for six points, fifth in the Central Division. Goaltender Joe Vrbetic faced 32 shots in his return from a three-game absence because of illness.

The Battalion, which played the fourth of five consecutive away games, wraps up the road run with a visit to the Owen Sound Attack at 7:30 p.m. Saturday.

Guelph jumped to a 2-0 lead on goals 30 seconds apart early in the first period, sparked by Stevenson at 4:43. Simon Rose fanned on a clearing attempt in front of Vrbetic, and Stevenson snapped the puck over the goaltender’s blocker. Ralph and Josh Wainmain received questionable assists.

Uba followed up with a shot as the puck emerged from the left-wing corner, on assists by Pavel Gogolev and Hillis, before Jackson replied with his third goal of the season at 6:49. Jackson, at the left lip of the crease, knocked home a rebound, with James Mayotte and Primeau drawing assists.

The Battalion, which killed the only penalty of the period after Brad Chenier went off for slashing at 8:23, had a couple of late chances. Daws denied Brandon Coe on a drive to the goalmouth in the 19th minute, and Daniil Chayka blocked Jackson’s attempt at a gaping net in the final seconds.

Roach gave Guelph a 3-1 lead at 12:24 of the middle period when he darted across the top of the crease to cash a rebound after a solid right-pad save by Vrbetic.

Moncada struck on the power play at 16:11 for his sixth goal to pull the Battalion within one, converting from close range off a feed from Liam Arnsby at the right side. Paul Christopoulos had the second assist. Ralph then got loose down the left wing and cut to the net to beat Vrbetic to the short side at 19:36.

The third period saw Guelph add four straight goals, starting with Bakanov’s rebound conversion at the left post at 3:20. Ralph stripped Christopoulos of the puck in front and slipped it to Stevenson for his fifth goal at 5:12. Defenceman Bianconi connected as the trailer in the slot at 10:53, and Sikic struck for his first OHL goal 22 seconds later.

Primeau netted his fifth goal at 12:07, putting the puck between Daws’s pads from a sharp angle to the goaltender’s left on assists by Jackson and Mitchell Russell, before Hillis, alone in front, chipped the puck high into the net at 16:42.

The game at Owen Sound can be seen live on YourTV Channels 12 and 700 and heard on Country 600 CKAT.

BATTALION BULLETS: The game was the first of two season meetings. The second is scheduled Jan. 30 at North Bay … The Battalion, which has an all-time won-lost-tied record of 25-30-4 against Guelph, hasn’t posted a winning record against the Storm since 2015-16, when the Troops swept two games … Two fights in the final period saw Cameron Peters decision Guelph’s Ben McFarlane at 8:32 and Roach sucker-punch Harrison Caines at 12:49 … Rose returned to the Battalion blue line after missing seven games with a hamstring injury suffered Oct. 3 in a 5-2 loss to the visiting Peterborough Petes. Rose opened the game alongside Nick Grima, who was acquired in an Oct. 7 trade with the Sarnia Sting … The Battalion went 1-for-2 on the power play. Guelph was 0-for-2 … Opening lines featured Matthew Struthers centring left winger Chenier and right winger Coe, Primeau centring left winger Jackson and right winger Russell and Moncada pivoting left winger Caines and Arnsby on right wing. Peters centred left winger Josh Currie and right winger Alex Christopoulos … The Battalion was without Ryan Thompson, Niki Korpialho and Nick King … Vrbetic turned 17 on Thursday. He was a second-round pick in the 2018 OHL Priority Selection from the Don Mills Flyers minor midgets … The Troops bused to Owen Sound after the game to overnight there … Tom Sweeney and Leon Wood were the referees.