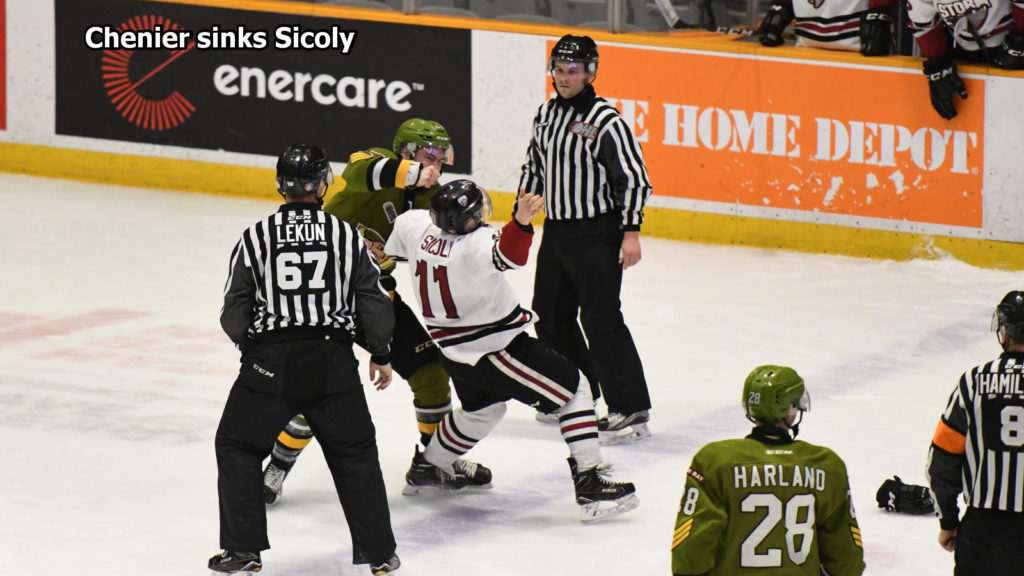 Liam Hawel scored the other goal and had one assist and Albert Michnac provided three assists for Guelph, which won for the first time in four games to move its won-lost-extended record to 18-27-5 for 41 points, fifth in the Midwest Division. Goaltender Liam Herbst made 37 saves.

Justin Brazeau scored for North Bay, 19-28-4 for 42 points, fourth in the Central Division, one point behind the Niagara IceDogs with a game in hand. Starting goaltender Julian Sime allowed all three goals on 19 shots before leaving with an injury late in the second period. Brent Moran faced 13 shots in relief for the Battalion, which visits Niagara at 7 p.m. Saturday.

“Our whole effort was disappointing,” said Battalion coach Stan Butler. “We had pretty good practices this week, and I thought our guys understood where we were and what we wanted to do. Our first two periods, we came out with the intensity of an exhibition game, and that’s disappointing at this time of the year.”

The Battalion challenged through the first 5:11 of the opening period, which was played without a whistle, but it was Guelph which took a 1-0 lead when Hawel put a wrister from the edge of the right-wing circle over Sime’s blocker at 9:21. McEwan doubled the advantage at 14:04, finishing off a two-on-one rush with Michnac against Adam Thilander.

The Troops, who held an 11-8 edge in shots in the frame, tested Herbst twice during their lone power play, but he kicked away two drives from Thilander and denied Kyle Potts’s chance from the lip of the crease in the 13th minute.

McEwan added his 11th goal of the season at 1:41 of the second period. Sime stopped McEwan’s first chance in close, but he grabbed the rebound and saw his shot from deep in the left circle trickle under the goaltender.

The Battalion was outshot 14-12 in the period, but Sime was sharp, particularly with the Battalion on the power play in the 14th minute when penalty killers McEwan and Isaac Ratcliffe broke in alone.

Sime was shaken up at 16:19 when he took a shot off the left wing from Dmitri Samorukov that appeared to strike the goaltender in the side. Sime, who was attended by athletic therapist James Borrelli, stayed in the game until 16:50.

Herbst turned aside good early chances from Zach Poirier and Steve Harland and found a Zach Shankar drive from the blue line through a screen. Poirier and Daniel Walker whacked at a puck in the crease in the 15th minute, and Herbst stopped Harland in close and Brett McKenzie on a late chance off the left wing.

The Troops pressed throughout the third period. Harland and Walker each hit a post early in the frame, and Herbst denied in-tight chances for McKenzie and Harland. Herbst stopped Brazeau in the goalmouth and blocked a Thilander blast with the Battalion enjoying a two-man advantage that lasted 1:25.

Guelph appeared to have scored at 12:31 when Nick Deakin-Poot shoveled a loose puck past a sprawling Moran, but referee Mike Hamilton immediately waved off the play, ruling interference on the goaltender.

The Battalion struck at 16:50 when penalty killer Brazeau, on a breakaway, beat Herbst high to the blocker side. McKenzie and Mark Shoemaker assisted on Brazeau’s 15th goal, North Bay’s ninth shorthanded tally.

The game at Niagara can be seen live on CogecoTV Channel 12 and heard on Country 600 CKAT.

BATTALION BULLETS: Guelph posted a 5-2 home-ice victory over the Battalion on Oct. 21 in the teams’ only other meeting … Sime made his first start since Jan. 27 and the infamous 5-4 loss via shootout to the Kitchener Rangers in which the hosts were credited with a third-period goal despite the puck never having come close to entering the net … The Battalion went 1-8-1 against Midwest teams, the lone win coming against the Erie Otters, who boast the OHL’s best record at 37-10-3 … The Battalion was 0-for-6 on the power play. Guelph went 0-for-5 … The Battalion has used two goaltenders in each of the last three games … Opening lines featured McKenzie centring left winger Walker and right winger Harland, Poirier centring left winger Daniil Vertiy and right winger Rhys Forhan and Potts pivoting Adam McMaster on left wing and right winger Brazeau. Ball centred left winger Chenier and Max Kislinger on right wing … Apart from Hargrave, the Battalion scratched Eric Allair, Cam Dineen, Riley Bruce and Mat Woroniuk … Rearguard Eric Nagy again was up from the junior A Powassan Voodoos … Lyle suffered a gash to his right leg in a 2-1 loss Jan. 12 to the visiting Mississauga Steelheads and missed 10 games … Guelph defenceman Ryan Merkley, who failed to earn a point, leads OHL rookies in assists and points with seven goals and 29 assists for 36 points in 44 games … Aaron Neely was the other referee.