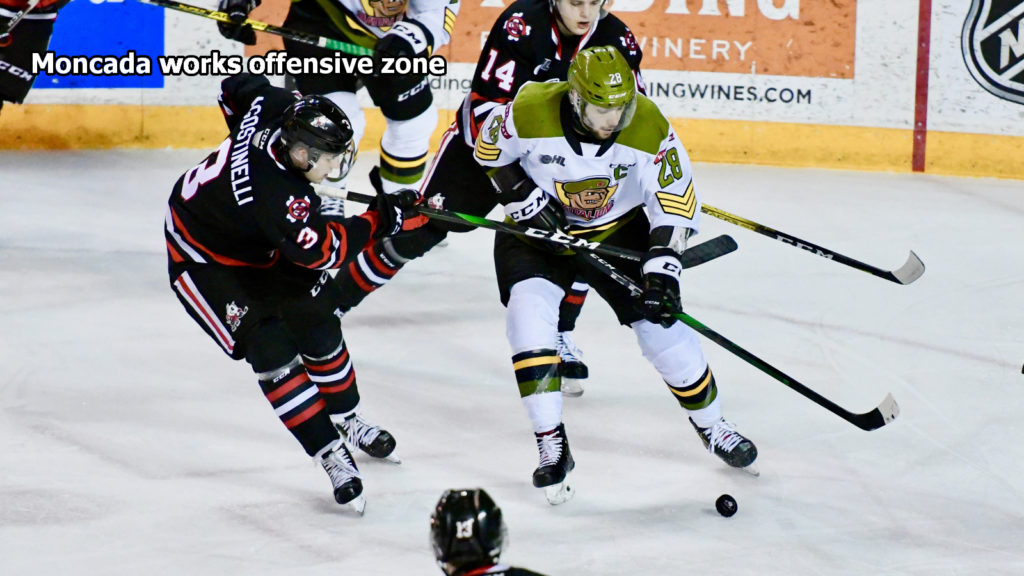 NORTH BAY, Ont. — The North Bay Battalion embarks on its first home-and-home series of the Ontario Hockey League season when the Sudbury Wolves, who figure to have Brad Chenier in the lineup, pay a visit at 7 p.m. Thursday.

“It can provide a lot of benefits,” Ryan Oulahen, the Battalion’s interim coach, said Wednesday of the two-game Sudbury set, which wraps up Friday night in the Nickel City.

“When you do have an opportunity back-to-back, you can focus more on what things they’re doing.”

The Battalion dealt left winger and captain Chenier on Jan. 9 for centre Shane Bulitka, who was Sudbury’s captain, and two OHL Priority Selection picks as part of the young Troops’ restocking process.

“We obviously hope the best for Brad and all the best going forward, but we want to come out on the right side of things,” said Oulahen.

North Bay, which ended a six-game skid with a 3-1 road victory last Saturday night over the Niagara IceDogs, has a won-lost-extended record of 10-30-2 for 22 points, fifth in the Central Division. Sudbury is first at 22-20-1 for 45 points.

“That was a feisty hockey game,” Oulahen noted of the Niagara clash, in which centre Luke Moncada, who succeeded Chenier as captain, scored three goals, including two empty-netters. Goaltender Andrew MacLean surrendered the first, and Anthony Agostinelli scored for the IceDogs, cutting their deficit to 2-1.

Moncada’s were the fastest three goals by one player in franchise history, covering a span of 5:44 from the 13:40 mark of the third period to 19:24.

He broke the record of 8:50 set by Nick Paul in a 4-1 verdict over the visiting Barrie Colts on Oct. 13, 2014. Paul recorded an actual hat trick, consisting of three consecutive goals by one player, from 9:35 to 18:25 of the third period, the third tally into an empty net. Mackenzie Blackwood was the Barrie goaltender.

Justin Brazeau has the next two fastest three-goal showings. He scored three first-period goals in 10:12 in a 7-5 road loss to the Oshawa Generals on Sept. 30, 2018, with Cole Ceci in goal for the hosts, and netted four consecutive goals, the first three in 10:16 of the first and second periods of a 5-4 home-ice win Dec. 16, 2018, over Barrie. Jet Greaves started for the Colts and gave up all four Brazeau goals before being relieved by Maksim Zhukov.

The term “hat trick” originated in cricket in the 19th century and is used to recognize a bowler dismissing three batsmen with consecutive deliveries, an extremely rare feat.

“You love when kids like him get rewarded, because it’s all built on work ethic and compete,” Oulahen said of Moncada, who turns 20 on May 29.

“He’s done a lot of things off the ice. He’s gotten bigger. He’s gotten stronger, and his confidence right now is through the roof.”

Russell, who was assessed a kneeing major and game misconduct for first-period contact with Niagara’s Ivan Lodnia, was spared supplemental discipline.

In fact, video showed that Russell maintained his direct route and that Lodnia extended his left knee into Russell’s path, suggesting there was no infraction at all.