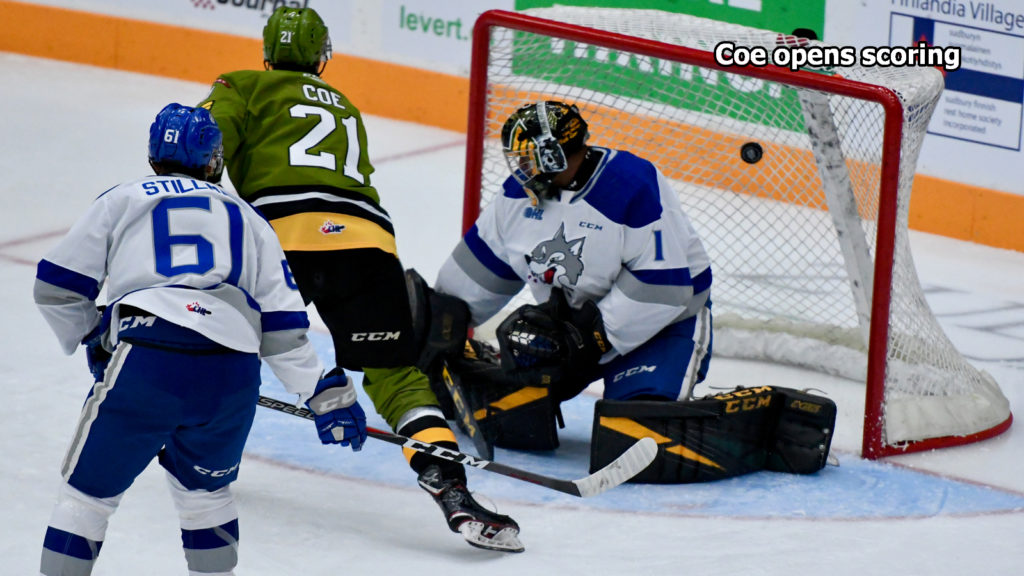 Macauley Carson had one goal and three assists and David Levin and Blake Murray one goal and two assists apiece for Sudbury, which evened its record at two wins and two losses. Nolan Hutcheson and Jack Thompson each had one goal and one assist, while Ethan Larmand, Isaak Phillips, Chase Stillman and Giordano Biondi scored a goal apiece.

Goaltender Christian Purboo, a former member of the Battalion, made 27 saves before a home opener crowd of 3,865 at the Sudbury Community Arena.

Christian Cicigoi, the Battalion’s starting goaltender, surrendered five goals on 16 shots before being relieved at 2:38 of the second period. He returned for the final frame, when he allowed two goals on 11 shots. Joe Vrbetic, who completed the middle period, gave up four goals on 14 shots.

Brandon Coe scored one goal and earned an assist for North Bay, the OHL’s youngest team, which suffered its third loss in four games this season after a 3-2 overtime victory Thursday night over the visiting Kitchener Rangers. Matthew Struthers and Paul Christopoulos also scored.

Sudbury, which led 2-1 after 20 minutes, turned the game into a rout with seven second-period goals, the first on a one-timer by Gilhula just 29 seconds into the frame. Murray struck from the top of the right-wing circle at 1:04, and Larmand precipitated Cicigoi’s replacement when he converted a Landon McCallum pass off the end boards to the goaltender’s left, popping the puck home.

Gilhula completed a series of passes with Murray and Levin on the power play at 6:22 when, stationed at the right lip of the crease, he gave Vrbetic no chance, and defenceman Phillips tipped home a hard pass by Carson from the left edge of the blue paint at 8:53.

Stillman broke past a defender to move in alone on Vrbetic to score on a backhanded deke at 14:33 before Biondi snapped the puck into the net directly off a faceoff win by McCallum in the left circle at 19:28.

Struthers, in his second game coming off an upper-body injury, scored his first goal of the season on a two-man advantage at 4:18 of the third period, assisted by Coe and Nick King.

Carson connected at 14:11 on a screened drive from high in the zone, and rearguard Thompson netted the last Sudbury goal at 18:03 off the right wing before Christopoulos scored on a rush up the middle off a setup by Mitchell Russell at 19:27. Also assisted by James Mayotte, it was defenceman Christopoulos’s first OHL goal.

The Battalion started strong, with Coe opening the scoring at 5:29 of the first period. Coe cut to the net from the right wing and beat Purboo on a backhand deke. Brad Chenier had the sole assist.

But Sudbury replied with a shorthanded goal and a late-period tally to take the lead. Penalty killer Hutcheson backhanded a rebound past Cicigoi at 11:07 off a two-on-one counterattack with Quinton Byfield, who had his first of three assists. Levin scored at 19:54 off an innocent-looking situation that went badly for the visitors as Carson got the puck to Levin for his first goal.

Sudbury forged a 13-8 edge in shots in the frame, with Purboo denying Coe on a break up the middle in the third minute. Hutcheson dropped Mason Primeau with a high crosscheck in the ninth minute without a penalty.

The Battalion returns to action when it plays host to the Peterborough Petes at 7 p.m. Thursday.

BATTALION BULLETS: The Battalion traded Purboo to Sudbury on Sept. 4, receiving as many as four OHL Priority Selection picks: a fourth-rounder in 2020, a third-rounder in 2021, a fourth-rounder in 2022 and a conditional fifth-rounder in 2021 … The Battalion has released right winger Patrick Brown after he cleared waivers. A seventh-round pick in 2016 from the North Central Predators minor midgets, the Midland, Ont., resident had five goals and 12 assists for 17 points in 116 career games … Opening lines saw Struthers centring left winger Chenier and right winger Coe, Primeau centring left winger Harrison Caines and right winger Russell and Luke Moncada pivoting Cameron Peters on left wing and Liam Arnsby on right wing. Kyle Jackson centred left winger David Campbell and right winger Alex Christopoulos … North Bay was without Ryan Thompson, Niki Korpialho and Josh Currie … Battalion defenceman Simon Rose played his 100th OHL game. A second-round pick in 2017 from the Pembroke Lumber Kings minor midgets, he has three goals and 20 assists for 23 points … Currie has been credited with an assist on Christopoulos’s goal in a 6-4 road loss last Saturday night to the Sault Ste. Marie Greyhounds, marking rookie Currie’s first OHL point … North Bay went 1-for-5 on the power play. Sudbury was 1-for-3 … Adam Dennis, a Battalion assistant coach, missed a second straight game to illness.