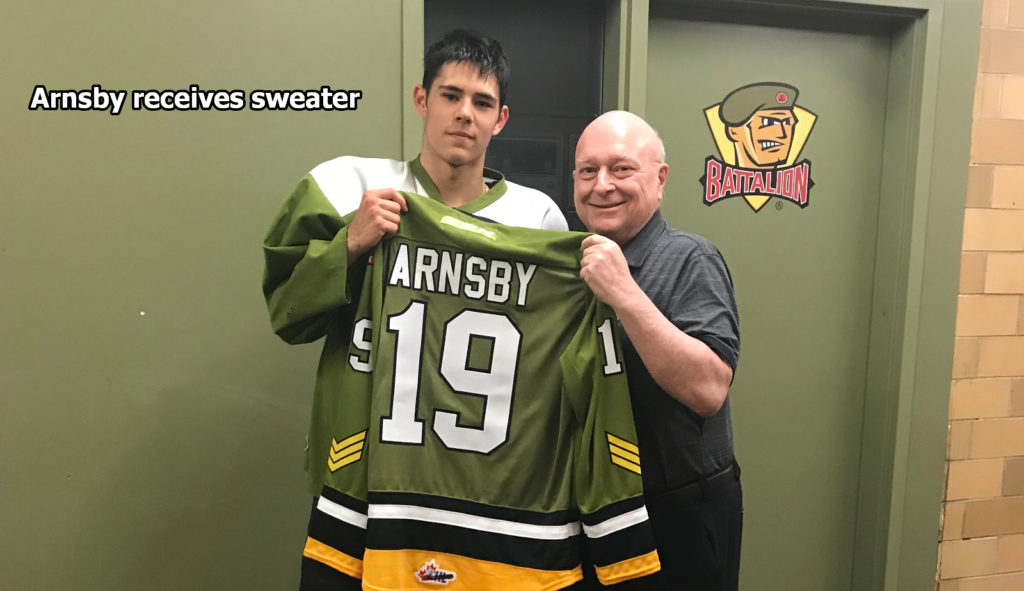 Stan Butler, director of hockey operations and head coach, said centre Liam Arnsby, defenceman Paul Christopoulos and right winger Alex Christopoulos have committed to the club. Arnsby and the Christopoulos twins were the Battalion’s first three picks in the OHL Priority Selection on April 6, all from the Don Mills Flyers minor midgets.

“We had a really strong program and a great coaching staff, and everybody just bought in,” Arnsby said of the Don Mills team, which won the Greater Toronto Hockey League title and the OHL Cup tournament.

Arnsby, an Ajax, Ont., resident, has lived in the same neighborhood as Battalion right winger Brandon Coe, the club’s first-rounder, third overall, in 2017 from the Toronto Nationals minor midgets.

“He just told me after I was drafted how good North Bay is and that I’m lucky to be here.”

Arnsby, selected ninth overall, received a Battalion sweater bearing No. 19 to reflect the year of his selection from club owner Scott Abbott.

Defenceman Christopoulos, a resident of Richmond Hill, Ont., said he was somewhat unsettled before the OHL Priority Selection.

“I was anxious, a little bit nervous,” he noted. “In the second round when North Bay chose me, it was an honour.”

He said he knows the challenge that lies ahead.

“I’ll have to earn my spot on the team. Stan Butler’s a really good coach. He pumps out a lot of prospects.”

Winger Christopoulos said he was happy to be joining North Bay, regardless of where his brother was headed.

“It’s a great city. The fans love their hockey, and it’s a hockey city.”

As for his own game, he suggested he plays all-out.

“I’m a good passer. I shoot the puck really well. I just look for open people, and I skate.”

A total of 34 skaters and five goaltenders attended the camp, which opened Friday with evening fitness testing before two intrasquad games Saturday and one Sunday at Memorial Gardens. All took to the ice except Jack Stockfish, a 15th-round selection last year from the North Bay Trappers minor midgets, who was injured.

“I thought it was a very good camp, and I’m very pleased,” said Butler, who watched the games from the stands while assistant coaches Scott Wray and Adam Dennis ran the Team White and Team Green benches respectively.

Christopoulos scored two goals and Jesse Kirkby, Paul Christopoulos, Mat Hardwick and Devon Savignac had one apiece to power White to a 6-2 victory Sunday and a sweep of the camp games, which were played in three 20-minute periods. White took the opener 6-1 and followed up with a 5-0 win before seven players, including all the goaltenders, switched sides for the last game.

In goal, Owen Wray, Joe Vrbetic and William Nguyen played a period apiece in the last game for White, while Christian Cicigoi and Reece Proulx split time in the Green net. Over the three games, Vrbetic and Wray each allowed four goals in 60 minutes, while Nguyen surrendered five. Cicigoi was beaten for two goals in 90:54 and Proulx for five in 89:06.

Erik MacNiel, a defenceman who was a seventh-round pick in April from the Quinte Red Devils minor midgets, left after Saturday action because of prior commitments.